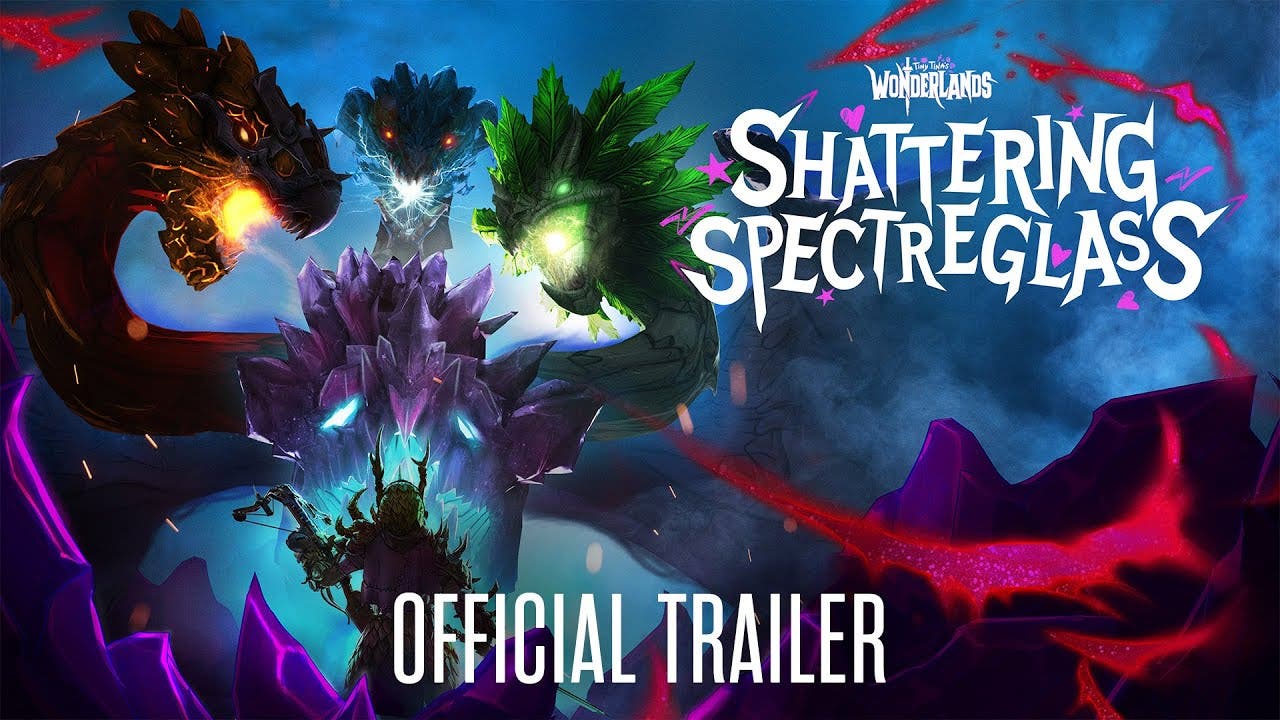 Today, 2K and Gearbox Software announced the fourth Tiny Tina’s Wonderlands® DLC, Shattering Spectreglass, is now available for individual purchase and to owners of the game’s Season Pass*. Headlining Shattering Spectreglass is the all-new Blightcaller class, which allows players to harness the noxious essence of swamps with potent precision, alongside new ways to customize your Fatemaker, including an all-new voice. Check out the new trailer.

Shattering Spectreglass begins in Dreamveil Overlook, where players will face Vesper’s most personal Mirror of Mystery yet. Shattering Spectreglass offers a window into Vesper’s memories, which are plagued by visions of Redmourne the Trivern, a mighty beast that can grow multiple heads and feeds on fear, siphoning his power from lost souls. Bringing down this winged behemoth once and for all is the only way to help Vesper escape her past. Blightcallers are adept at dealing elemental damage, particularly Poison, and get further boosts to their elemental damage whenever they apply a Status Effect thanks to their Class Feat, Whisper of Rot. With this new class, players will have even more Multiclass builds to explore.

Additionally, new character creation options for your Fatemaker include a new Grim voice personality that provides delightful doom-and-gloom demeanor. You also get the ability to further tweak starting stats thanks to four fresh backstories to choose from: Nerfed by the Bunkermaster, Clownblood, Apprentice Barnacle Scraper, and Street Urchin Success Story. In the weeks following the launch of Shattering Spectreglass, the new big bad, Redmourne the Trivern, will recoup and regenerate his element-spewing heads, ready to terrorize with a swath of new attacks. With each progressively tougher version of this battle, new Legendary gear will be added to the loot table, giving players good reason to return for rematches.

New legendary loot, including a wide array of fresh cosmetic items, can be rewarded from Vesper’s Wheel of Fate after players defeat Redmourne at least once, as well as random drops.

Completing Shattering Spectreglass will add four unique level layouts and the Redmourne boss fight to the pool of Chaos Chamber, the endlessly replayable endgame of Tiny Tina’s Wonderlands. This will expand the myriad of combinations for your randomized dungeon, making each run that much more unpredictable. Developed by Gearbox Software, the ESRB rating for Tiny Tina’s Wonderlands is T for Teen. For screenshots, key art, and other visual assets, please visit newsroom.2k.com.