What do you think will happen in the next eight years with entertainment? Genre-defining movies, world-shaping new music, and esports on TV in the bar certainly are all possibilities. Did you guess televised deathmatches, though? Well, that’s the entertainment in the future presented in Rollerdrome, a new sport where one contestant on roller skates holding guns faces off against waves of enemies. It has a striking look, a staggering soundtrack, and a spectacular set of controls. Rollerdrome is like Tony Hawk Pro Skater but with roller skating and it had a baby with the gunplay and bullet-time of Max Payne for one of the best feeling and playing games of the year, hands-down. This is Rollerdrome, a deadly new sport that is attracting everyone to watch, probably on Twitch or something. It’s a reality show with deadly consequences, but people can’t get enough. The game is light on story, but the dark goings on is just enough to keep you invested about the corporate greed and conspiracy that surrounds the sport more than the drama of its contestants. There’s moments where you can catch your breath before the next set of stages where you can walk around, listen to the radio reporting you and others, read notes, look at news clippings, and sneak onto computer terminals to get the juicy details. This season of Rollerdrome is different, and a new champion is about to be crowned, but at seemingly great cost for newcomer Kara Hassan, which you play is.

The goal of Rollerdrome is simple: survive by way of killing everything and everyone, and achieving that goal is not as easy at it would seem. Each level has you skating in and dropping into various indoor and outdoor malls, resorts, summits, arenas, and stadiums where you’ll encounter the House Players, the formidable enemy faction hellbent on killing you no matter the cost. You know what they say, “the house always wins”. These highly-skilled mercenaries come in waves as various classes that will do anything and everything to kill you. While you’ll get very acquainted with the eight classes; you’ve got your everyday baddies with bats that can be dispatched with ease, snipers picking you off at range, poison-spewing exosuits, grenadiers, and more that will lay waste to you if you lose focus. Each enemy has a weakness that can be exploited, and learning these through the course of play as they are introduced is the key to your survival. There’s a total of eleven levels for the campaign, which I completed in just shy of five hours. Now that may seem this is a short game, but this is only the beginning of a craving that will be tough to satiate. Upon completing a level, which in all scenarios is killing every House Player, you’re presented with stats on how you did. It’ll show you the time it took to complete the level, enemies eliminated, longest combo, best combo score, damage taken, and unique tricks. If you exceed the maximum time, you’ll incur a penalty relative to your final time. This is then all calculated towards a score and you’re given a grade before you move on. Rollerdrome is going to be one where you’re leaderboard chasing often. It’s just so compelling to replay any given level to beat that friend you’re just short of overcoming for bragging rights. Getting good at this game to post scores that rivals anyone bears some not-so-shocking similarities to Roll7’s own skateboarding game, OlliOlli World.

After the campaign there’s a new mode that unlocks, and it’s absolutely brutal and devastating. It definitely lives up to its name, as it remixes and amps up the campaign levels you just were victorious in. Presented as a continuation of the story, it picks up a year later with you still as Kara Hassan. When you play the levels in this mode, all house players appear in all levels (rather than the gradual introduction), all of your weapons are available for use, House Players do 1.5x damage to you, and the soundtrack is remixed for a completely different feel, a darker tone. Thankfully, there are less challenges to complete, but the requirements are incredibly demanding. If you’re the type that likes being taken out back getting the shit kicked out of you, then this is the mode for you. I’m not joking when I say that it’s absolutely unrelenting, and in some levels I was killed in mere seconds. This mode is where your skills are truly put to the test, and you’ll feel wholly inadequate from moment one here. One of the splash screens when starting the game up suggests you use a controller, and I agree with that. While I was anticipating using a mouse for the shooting, the skating and tricks controller game almost require it. A lot of the controls are familiar if you’d played Tony Hawk’s Pro Skater 1+2 as you’ll be pulling off grinds, grabs, acid drops, wall-riding with ease. There’s only four weapons, each one tied to a direction on the d-pad, but this limited arsenal will be in frequent rotation as you learn the health and patterns of the House Players. In the order you receive them, there’s dual pistols, a shotgun, a grenade launcher, and lastly a rail gun. This is because each weapon has a specific purpose, and mastering that is going to become second nature. The core of the game works like this: killing enemies will drop health, and performing tricks reward you with ammo. If for some reason you’re not doing either of these, then it’s certain death. Timing is an important aspect, the game does well to telegraph incoming attacks with red markers, and if it turns white you can do a dodge that slows down time called reflex time. This is essentially bullet time, giving you a distinct advantage and is crucial to use properly. You will die a lot in this game, but the game is generous, such as during boss fights, it’ll ask if you want to restart the whole level or just the boss. I can’t say it took me more than one or two tries to beat a level or boss, but the game will step on you if you don’t get out of its way.

Completing challenges is another aspect I love, being able to make those empty boxes filled in with checkmarks is compulsive. In the campaign, there are ten objectives to complete per level. If you complete an objective during a run, it’ll stay checked, even if you get killed. There’s mundane ones like collecting all the combo tokens, or beating a certain score. But the more taxing ones have you performing a certain trick near the trick token, which is increasingly intimidating as you’re constantly being shot at. Completing these challenges are made harder by everyone shooting at you, something that never happens in Tony Hawk. Now I think it’s possible to do all challenges in a single-run, but I never could, though I’m sure there will be many YouTube videos that showcase that. 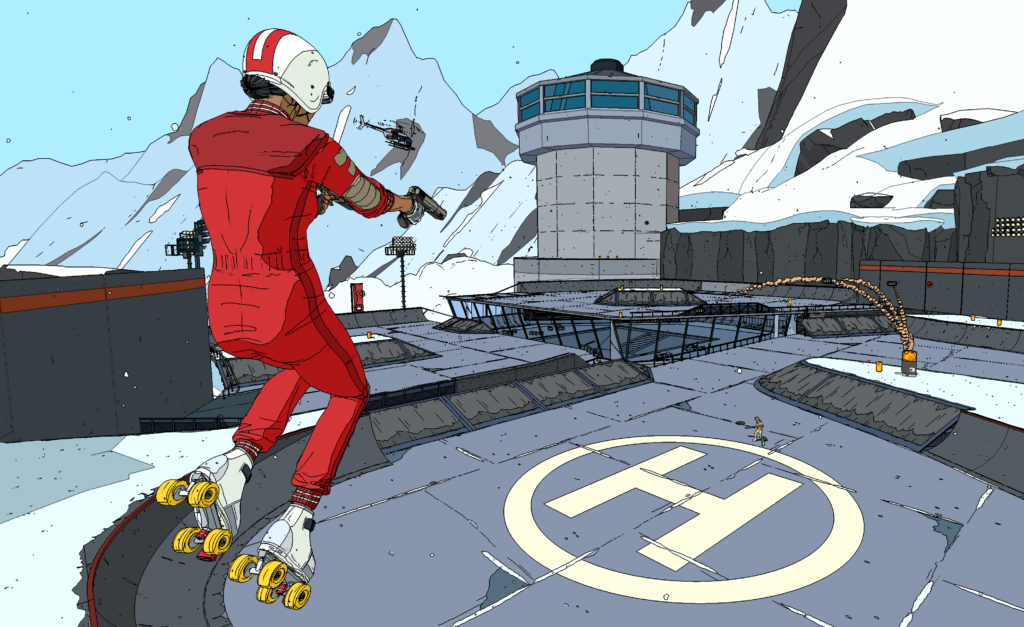 Roll7 took consideration ensuring the game was accessible to all players, despite its difficulty. The assists that you can enable for those who need or simply want it are incredibly helpful and appreciated. The game does have a warning that by enabling any of them will disable leaderboards – though its unclear on achievements. You can turn on invincibility, adjust damage scaling, enable infinite ammo, toggle infinite reflex time, slow the game speed down from 100%, remove the requirement for challenge count to be met before the next series unlocks, and grants you additional slug shots within the window. The game may be hard, but Roll7 makes it easier for everyone to play and enjoy the alternate-future dystopia murder sport.

It may be the year 2030, but the but the synth soundtrack from Electric Dragon evokes the early 1980s. Each venue has a unique track that accompanies it, so you’ll recognize each location’s theme as you play. Then when you return after the initial campaign is over, the remixed tracks are even more intense and foreboding. It’s one of those soundtracks you listen to outside of the game, as it reminds you of the game, then you go play the game because you can’t stop thinking about playing it. 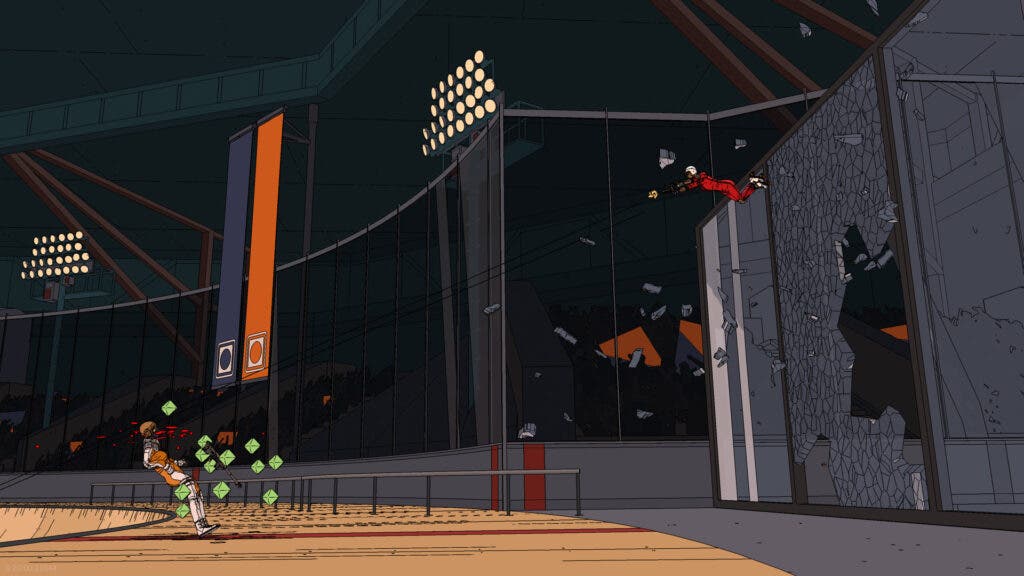 Rollerdrome is simply brilliant, and a worthy contender for Game of the Year. The fact that we’ve gotten two banger games from Roll7 in the same year of this caliber is astounding. The precise controls are what Roll7 does best, coupled with intense combat is pure excellence. The leaderboard chasing among friends and enemies is why you’ll stay, but the Out for Blood mode will be the reason you don’t put it down. Rollerdrome is an exquisite mash-up of maintaining a combo while killing to survive that’s pure kineticism, the de facto “skate or die”.