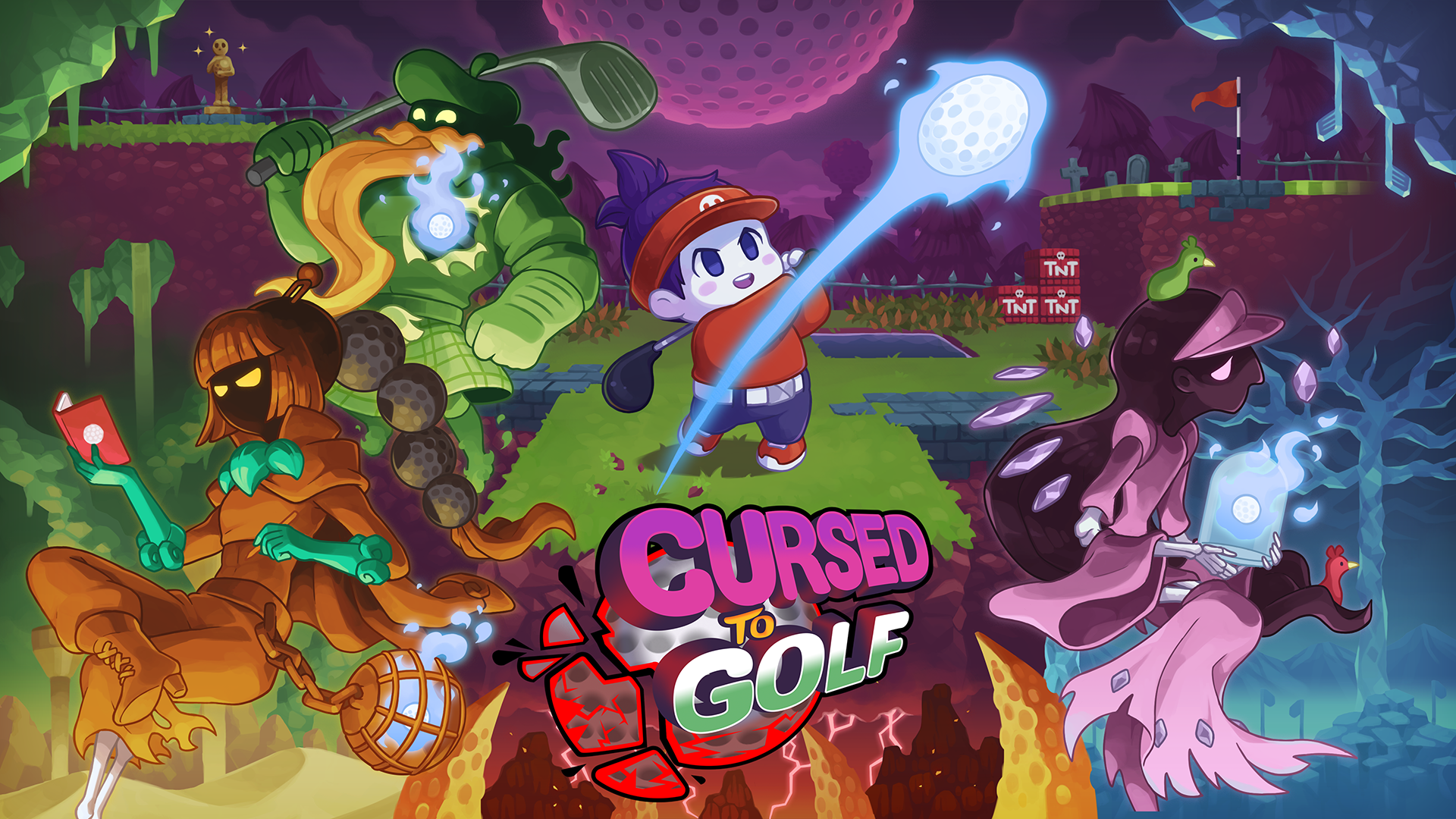 Golf games, mostly arcade-focused ones will always demand my attention. I’ve thoroughly enjoyed everything from Golf With Your Friends to Neo Turf Masters, even PGA Tour 2K21, and everything in-between. Cursed to Golf is yet another golf game with a twist, it’s a dark-yet-humorous take on golf, played in the afterlife to secure your freedom. The result is an entertaining game, full of mixed emotions and numerous minor bugs that hold it back. Cursed to Golf has a great premise behind it, but it doesn’t ace the golf game and am just left ambivalent to the whole experience. 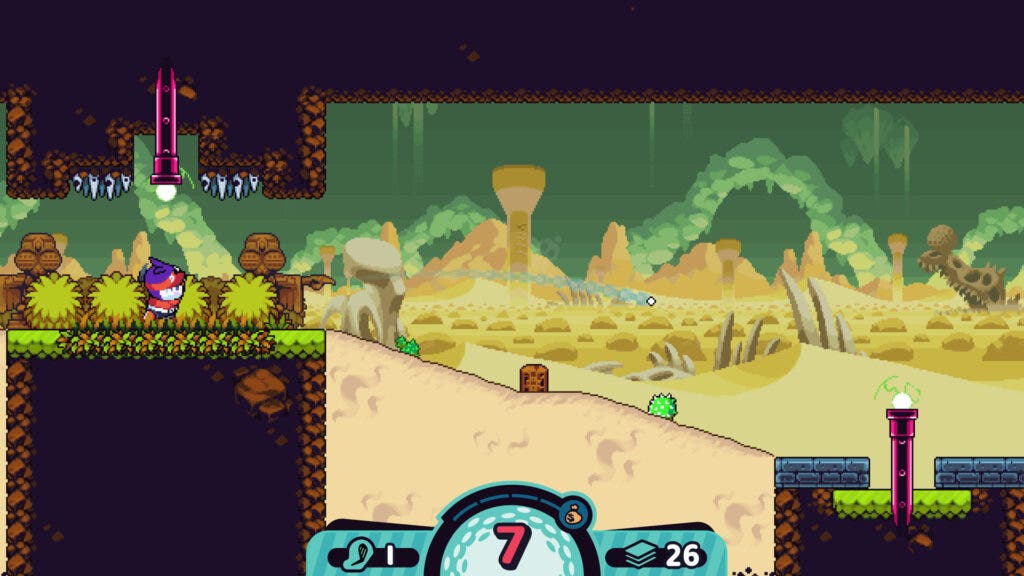 You play as a golfing champion, on his 18th hole when bad weather comes in and you get struck by lightning. You come to, and are informed that you’re dead, now in Golf Purgatory where you’re sentenced to play golf endlessly unless you can beat the bosses to free you from this prison. The goal is to simply survive eighteen holes across four different biomes and defeating each location’s boss, how hard could that be? Well this is a roguelike, so you’ll be combating against procedurally generated holes aided by a card system to get you through it.

After the initial cutscenes and gameplay, you’ll be put through an excruciatingly long tutorial. There’s a lot of dialogue that happens here, introducing you to characters and mechanics that are justified, but it’s a bit exhausting. And just when you think you’re free to play, the game has a scripted game of golf that you’re intended to lose so that it can teach you one final mechanic. Thankfully after about fifteen minutes, the game finally lets you loose for real. For whatever reason, each time you start a new game it counts the rounds, which is a bummer of a reminder. I don’t want to be reminded how many times I’ve started over, for a game designed to be played over and over. Though playing golf forever isn’t all bad, there are worse places to spend the afterlife. 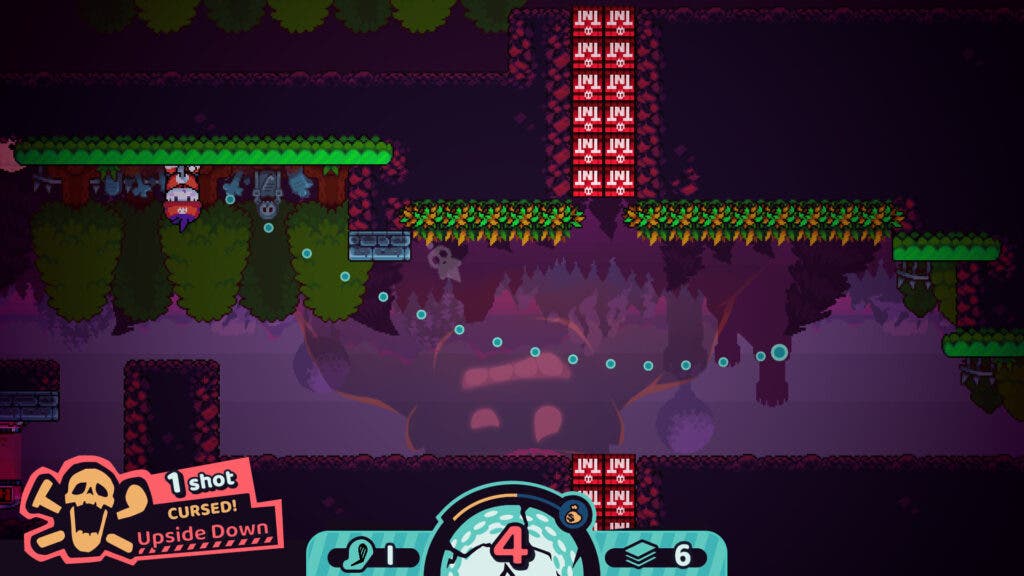 Once you’re on the course, you’ll start at Hole 1 to start playing the game of your life for your release. Keeping things simple, Cursed to Golf has you selecting between one of three clubs: wedge, iron, and driver. The wedge is your shortest distance club that gives you the greatest arc with each hit. Your iron rests in the middle of the road, offering medium power and a medium-sized arc. Lastly, the driver is your hardest hitting club that goes the furthest distance with the least amount of arcing. Mastering how and when to use each of these is a special skill throughout your time in the game. I would have liked to have seen a putter as an option instead of having to use the wedge to get it into the hole for least possible power or distance on a shot. The pressure in playing the game is that you have a limited number of shots before you sent back to the start. You can break idols or use cards to give you more shots to reach the end, but once you’re at zero, it’s game over. What hurts you a long the way is that penalties will be incurred if your ball goes into the water or lands near a gravestone where a skeleton takes the ball. This can be generally unfun, especially in the often tight corridors of these courses.

Since this is a roguelike, after completing a hole, you’ll be presented with a map to select your path. This is pretty standard fare for genre, and navigating the world map is slow and plodding, which is especially odd as you’re using a golf cart. You’ll have your choice of selecting a hole, shop, collecting money, and having to compete on cursed holes. These cursed holes introduce limitations on your ability to get through. One time I had to shoot to the left of the screen as the right had a wall, but the curse was I could only take shots in the direction of right. Now that was almost enough to end my run, but thankfully that curse ended only for a new one to begin. These cursed holes actively hate you, and will imbue other statuses like zoom, where it pushes the camera in and removes control of scouting the area for where your shots will land. Or the game will flip the course upside down, switching every control. There’s some really fun gameplay elements here, certainly ones that I think would be enjoyed more if it were multiplayer. 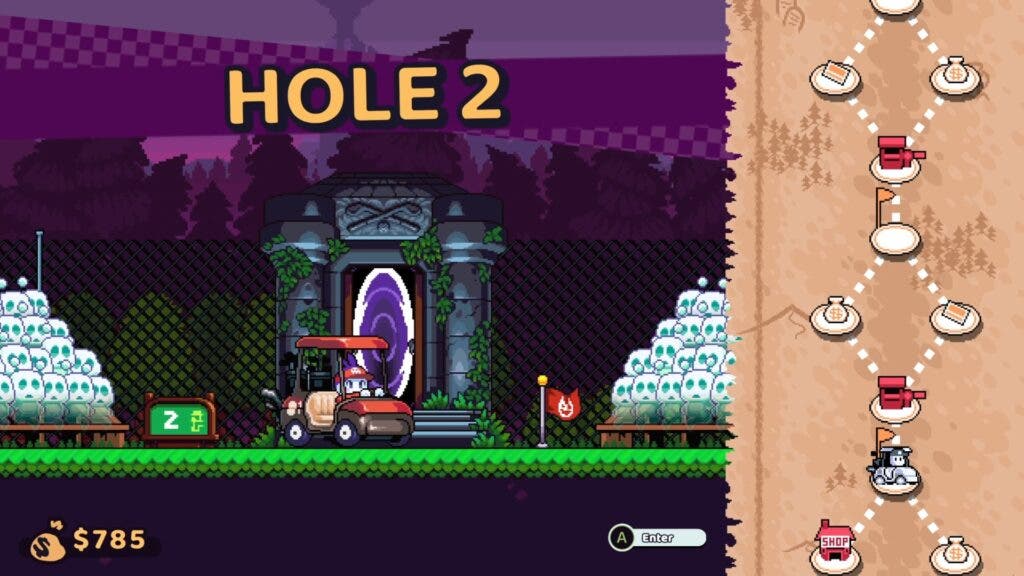 When you come to the shop, you’ll be greeted by your tutorial instructor, The Scotsman. You’ll be able to use your hard-earned money from golfing to purchase individual cards or card packs with unknown shop: Eterni-Tee. The card system offers some of the coolest systems in the game that really make the gameplay fun and unique. Extra play adds shots to your counter, explode will detonate explosives nearby that unlock shortcuts, mulligan gives you a free do-over, lead weight sinks your ball faster, and U-turn lets you do trick shots to get out of sticky situations. Knowing what you have in-hand and using them effectively becomes crucial to your success. But using something early or incorrectly can quickly be your undoing.

By default, the game lets you pan the camera around to get a basic idea of what’s around you and where the ball will land. With an additional button-press, you can switch to the birdie-eye view. The birdie-eye view lets you scout the entire hole, which can then help plan your route through it. For those who don’t care about the story beats or feel the camera pans too slowly, you can always hold the right trigger to fast forward and just get to your next shot. This is easily my favorite feature of the game, let me skip or fast-forward the parts I’m not interested in. The chiptune soundtrack is delightful, and is bound to get a track or two stuck in your head. There’s also a cosmetic section to change the look of your golfer, without any purchases tied to it, just a list of selections and that’s great. 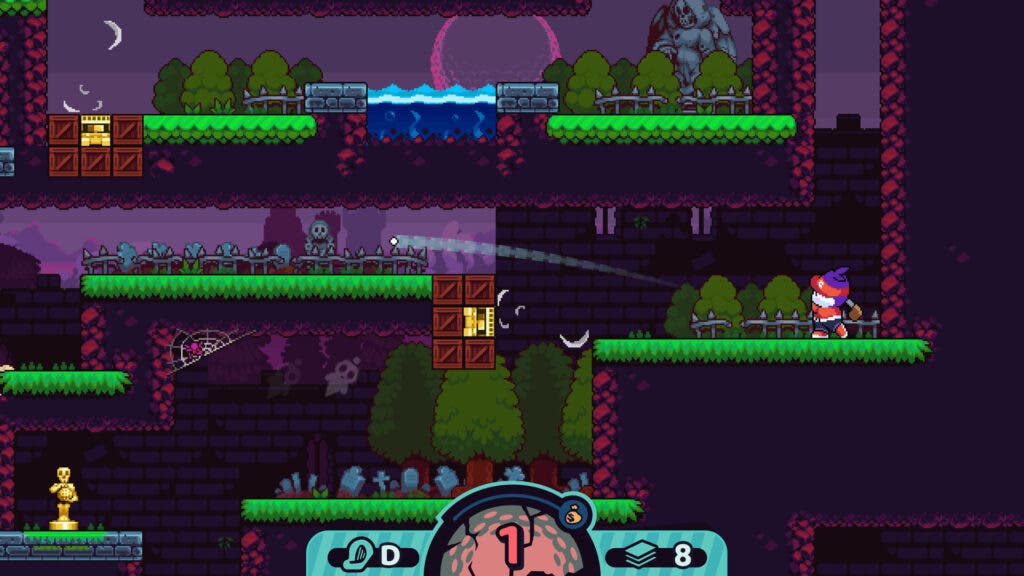 Cursed to Golf has solid gameplay, a great soundtrack, a fun retro aesthetic, and even replayability, but it doesn’t have my attention. As it is currently, it just doesn’t come together like it should for a hybrid of golfing and roguelike. I’ve played side-scrolling 2D golf games, but everything is too claustrophobic for my liking, even though it’s essentially a platformer this way. The promise of never-ending gameplay is enticing, but games like Desert Golf just do that better, and the bugs left me wanting to go play something else. Cursed to Golf is far from a bad game, but it’s a game that feels too restrictive and repetitive for its own good that gets in the way of enjoying it to the fullest.