Game Type DX has been released and remastered for 4K on Xbox One, Xbox Series X, and Switch

Game Type DX is a score-attack shoot-em up with a speed-boosting twist. Help Hoodie Girl fight the evil MediaBall’s inane advertisements! Each time you beat a level, the speed and difficulty increases! Originally released as a protest against Microsoft’s terrible dashboard update in 2011 on Xbox 360, and now, remastered and enhanced for modern consoles. Fly down a fascinating hall of gaming history, while blasting some unusual baddies. 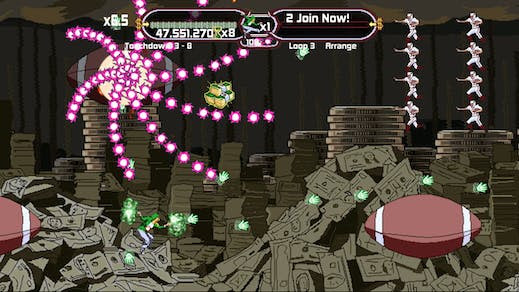 Designer Nathan Fouts remarks “I’m really happy we’ve been able to capture this unique piece of gaming history in its own game. It was a special time on the Xbox 360, and a special time in game development within the XNA community.” 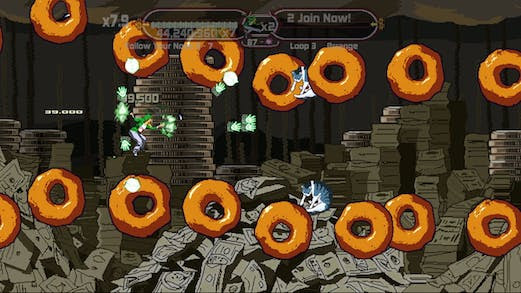 Fouts continued “I’m thrilled to see, that despite the unusual history of the game, people are enjoying it. Reviews are giving it high marks for the addictive quality of always going for a higher score. Sure it’s not a big game, but the budget price makes it easier to take the plunge.”

Game Type was originally released for the Xbox 360. Back then, the menu system called the “Dashboard” would be updated every few months. This system controlled how games were purchased on the Xbox 360. One particularly bad update left indie games almost impossible to find.

Mommy’s Best Games created Game Type as a protest against the dashboard update and a way to bring attention to the issue. Game Type ended up helping, and a new dashboard update was quickly released. The release changed the menu layout for the better, making indie games reasonable to discover again.

There are several new game modes included. One of the most intriguing game modes is aptly named “Surprise!”. In it players are treated to a random assortment of level segments with all new challenges to surmount. Their particular level arrangement then increases in speed each time the player completes it in a single run. The player receives help with the addition of several types of power-ups including those for shooting power, score, and damage. There are even wacky power-downs the player must avoid, or possibly take as they discover the patterns of the game. There are nearly 40 level segments with multiple new enemy types for players to discover in the all-new “Surprise!” mode.

Because the game has such a close resemblance to the Xbox 360 Dashboard, it’s been difficult to get the game approved for the Playstation. Thankfully the game will be approved soon, but a release date is not yet set for Playstation 4 and 5.

Released Now on Xbox One and Nintendo Switch

Join the Mommy’s Best Games Discord to get all the news on Game Type DX, upcoming MBG games and sales, and to discuss other run and gun games. Shmup players, retro enthusiasts and game developers are there now talking about the details of many classic shooters.