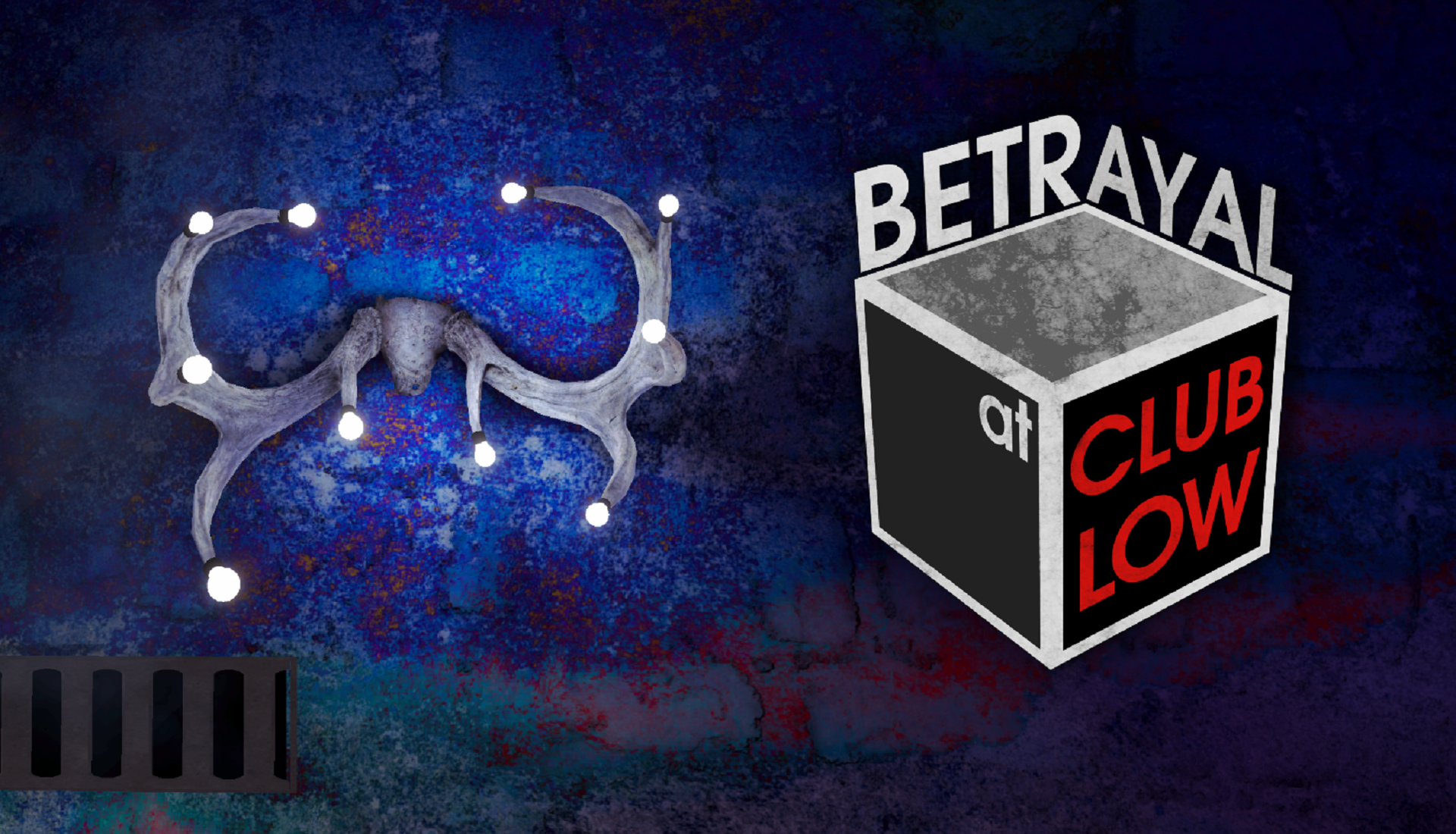 The things you end up loving the most are usually the ones you know the last about beforehand. That’s the case for Betrayal At Club Low, the first game I’ve played from developer Cosmo D, and the fourth they’ve released. Combining point-and-click adventure games with dice-roll mechanics is a flavorful mix of old and new. In fact, it reminds me of late 90s adventure games where 3D models were becoming more prominent over FMV, and excels in this awkward period of gaming, and embraces it for all its worth. Betrayal At Club Low is a bizarre and eclectic game that I can’t stop thinking about, and am eager to return to for another playthrough. 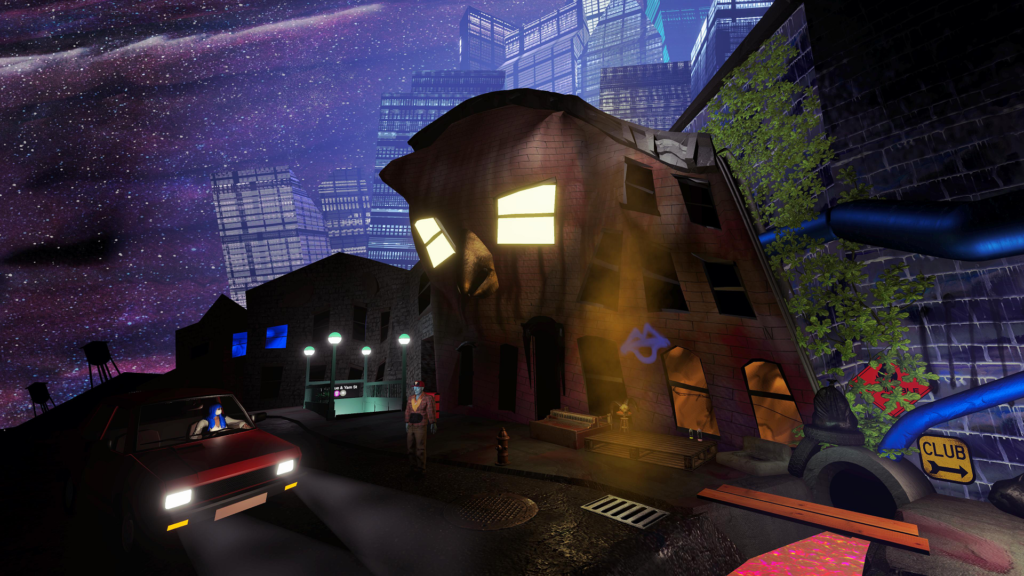 Tom Clancy never had such a convincing premise, an undercover agent posing as a pizza delivery boy has to infiltrate a night club to rescue an agent at-risk of having their cover blown. It sounds simple, but it’s a delicate game of utilizing various skills from bartering to thinking on your feet and even humor to social engineer your way out safely. The main currencies you need to keep high at all times are your health, your nerve, and your cash. Keeping all of these from reaching zero allows you to move forward in achieving your goals. This is a standalone continuation of the developer’s prior games, but I can’t say I felt lost or confused having not played Off-Peak, The Norwood Suite, or Tales From Off-Peak City Vol.1. I’m actually compelled to check them out now that I’ve played this, just because I want more.

So what is Betrayal At Club Low, exactly? Well on the surface it’s a 3D point-and-click adventure game. When it comes to dialogue, you must click and hold your choices when in conversation, allowing you to back out if you have any last second reservations. Eventually those conversations evolve into random chance dice rolls as the thing you want to do requires that your roll is better than your opponent’s. All the while you’ll be presented with opportunities that are up to you to take advantage of, or not. There’s an underlying presence of needing to improve your character traits in order to be more successful with regards to the extraction, but that too is optional. Up front this can seem like a lot, but it’s really after like the first thirty minutes when it all clicks. The remaining hour or two for the playthrough will be you just trying different things out or reloading a save if it doesn’t go to plan.

You have seven skills (cooking, deception, music, observation, physique, wisdom, wit) to work with, and you’re able to allocate points to them in any way or order you like. Each skill has six slots to spread points towards, with a maximum of six for each individual nodes, and they represent a side of the die you will roll. I found that setting skill point placement randomly, tended to make rolls land a bit more successfully. You can try to min/max, but you’ll need all of them throughout your playthrough, which is where exploration becomes important. Your skills can actually be improved at any time, so long as you’ve got the cash to spend on them.

The pizza gimmick for your character is masterful, and in Off-Peak City, pizza is considered pure artistry. As such, you’ve got pizza dice to go along with your skill dice that will be rolled during encounters. By the end of the game, you’ll have three pizzas that give opportunities to recover lost health, restore nerve, double your income, or even re-roll an opponent’s die. Until then, you’ll have to be strategic about the pizza you’re making, and the “ingredients” you’re placing on it. You’ll collect recipes and ingredients as you traverse the club. In order to change your pizza loadout, this can only be done at pizza ovens, which there are only three of. You can revisit any one of them to swap ingredients out and reorder potential rolls. 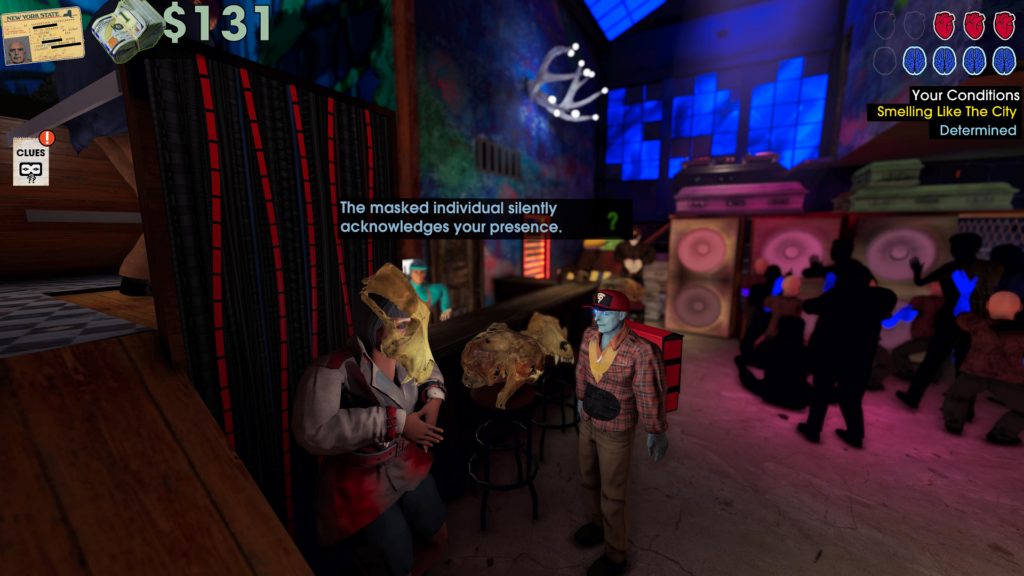 Conversations initially don’t do any skill checks, but it won’t be long where a dice roll is necessary. The amount of them increases as you progress, but thankfully with so many of these, the game will tell you what it’s for. It compares your dice to your opponent’s, and surfaces the odds and chances of success, as it factors in your skills that you’ve applied points to as well. Now, if you get a bad roll, you can pick and choose individual die to re-roll up to two times, ultimately accepting whatever the outcome is of the final re-roll. Save scumming is almost encouraged (except on the Iron Pizza difficulty, where you only get one save), and I’m here for it. The game also autosaves before actions are presented, so you can reload as much as you want. Regardless of the outcome, you’ll gain and lose conditions. For instance, you could “Smell Like the City” when you go dumpster diving, or become “Too Confident” after too many successful rolls. Some of the negative ones go away either over time or with more rolls, others are permanent buffs like some items you find and wear on your character. It may feel like the game relies on RNG to get by in favor of more static elements to be engaging, but I wasn’t ever bothered by any of it.

There are five difficulties to choose from, with even a custom one you can define. If that’s not good enough, there’s other modes to play the game, even a ‘4AM’ mode where it’s real late and every NPC has random traits and abilities you can’t predict. It’s a massive change-up for the game to have such unpredictability atop of the uncertain dice rolls. While it can be as easy or as hard as you like, normal felt like enough of a challenge that was the Goldilocks of difficulty. I’ve alluded to the two to three-hour playtime, and it’s so refreshing to play a game like this will a low investment of your time, that returns it so many meaningful ways. I’ve completed the game several ways now, and I just adore how it optimizes your time. One of the ways it does this, is with middle-click you can highlight all of the interactable objects, so you don’t waste your time on things that don’t matter. 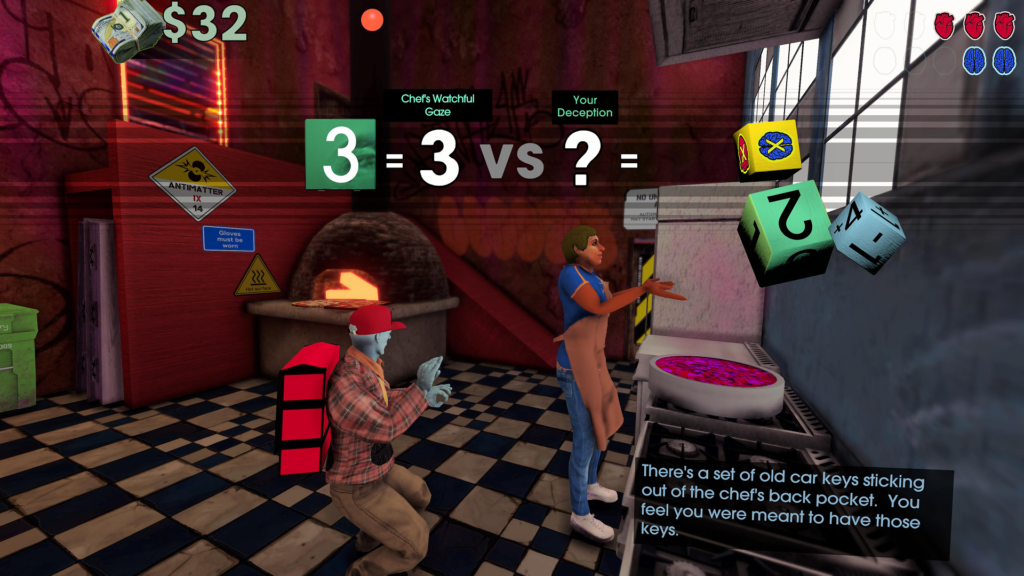 Once you gain entry to the club, Betrayal At Club Low lets you see the endgame pretty early on, which I think is a nice touch of setting goals. Though if you try to approach unprepared, you’ll realize that the stats are stacked against you. Once you’re actually ready, you’ll need to explore the club itself. There’s the VIP section where your agent is, security, dancers, the bar, DJ, back rooms, and even a kitchen for meeting the weird, quirky characters. There’s manager wanting to micromanage her employees, that will go for a little quid-pro-quo to get the scoop for what’s on their minds. Or the chef who is anxiety-ridden with her meal that could be convinced to have you take it over. While Club Low is confined place, it’s also elaborate as you have to find ways to unlock alternate paths or barriers to progress.

Sound plays such a huge role in the game, and developer and composer Cosmo D understands this. The way that audio plays at various distances, such as the music that the DJ is playing works in impactful ways. The closer you are to the dance floor or the DJ, you feel it, a deafening excitement of audio pumping through you. The soundtrack itself is enough to warrant the playthrough, but the overall ambiance is something that can’t be beat. 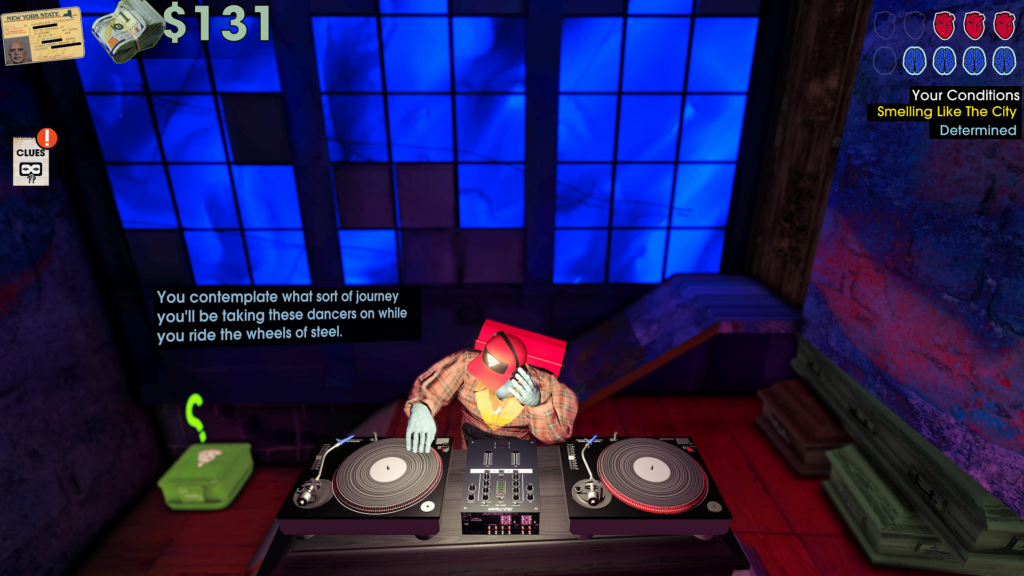 Off-Peak City is an off-beat city with a cast of characters of enigmatic proportions. You’ve not lived until you try to get a bartender to open up to you by either telling a joke or dancing, but perhaps jumping over the bar is more your style. This is one of the most surreal gaming experiences I’ve had, and it’s something I want more of. Having achieved four of its eleven endings, I’m contemplating my next run and what I can do differently. Roll the dice, and give Betrayal At Club Low your time and money, because it’s full of so many surprises and sagacious moments.