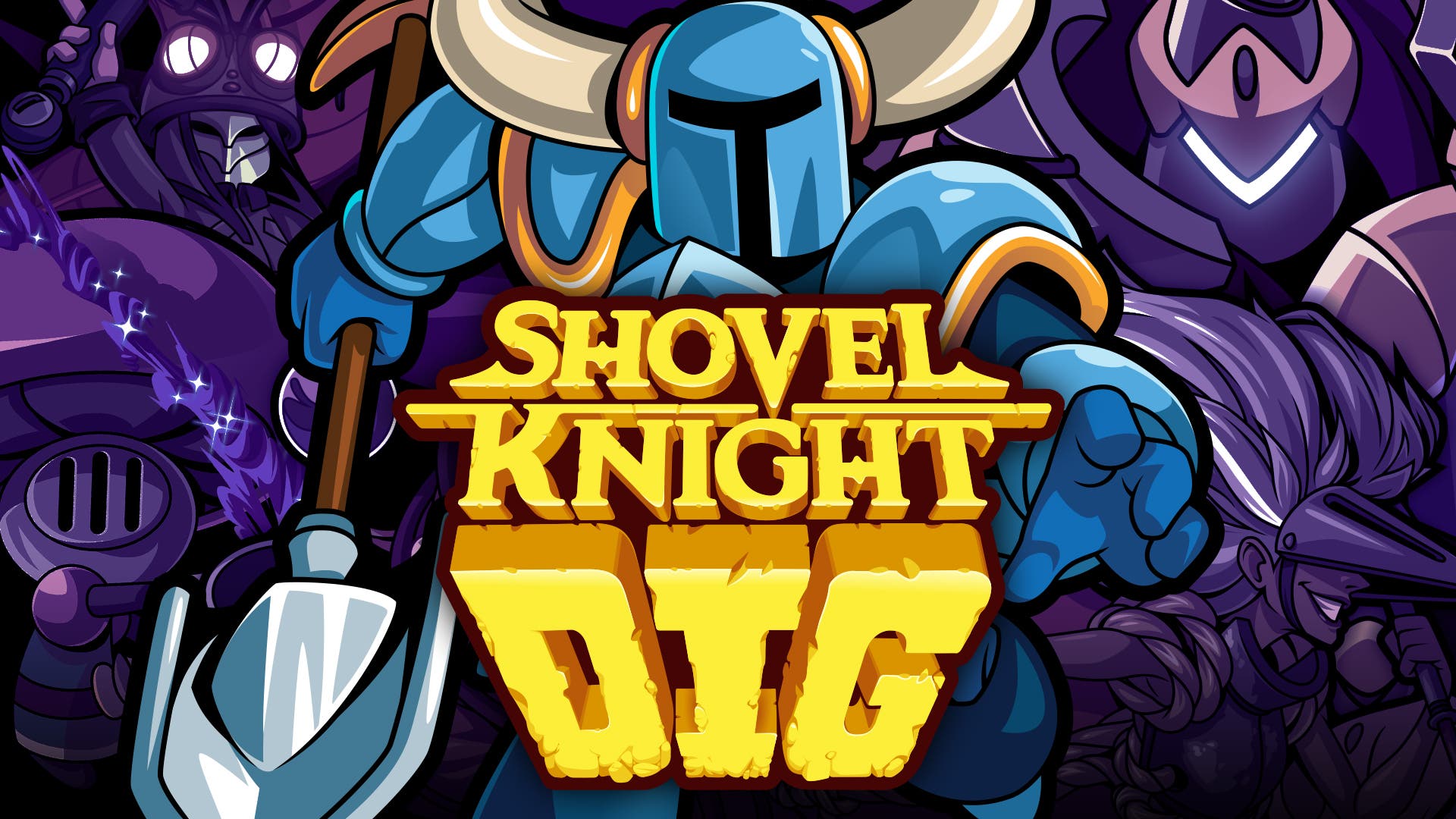 Will we ever tire of Shovel Knight games? After eight years since his debut, the answer seems to be a resounding ‘no’, and the quality has maintained. The second spinoff game, featuring a partnership with Yacht Club Games and Nitrome has seemingly struck gold. Shovel Knight has gone rogue.. like with Shovel Knight Dig, a surprisingly fitting mold for a new take on the action platformer. This entry sees the shovel-wielding hero in blue out to save the day once more, but his fondness for gem chasing is the means for progression through a hostile underground. Shovel Knight Dig is a simplified roguelike that emphasizes fun, encourages persistence, and an effervescent snack-sized adventure. 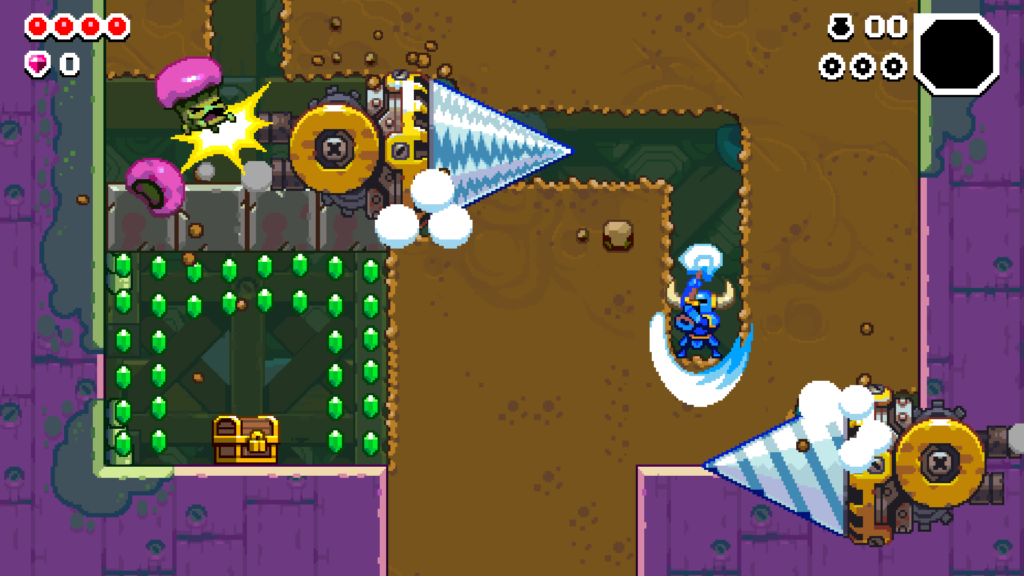 The game begins with Shovel Knight relaxing at his campfire as he’s wont to do, only to have his hard-earned loot stolen by Drill Knight. While the story is not really a focal point to the game, it does enough to keep things humming along. And the beauty of what’s going on here could happen at any time during the campaign of the original Shovel Knight. There’s a mighty big hole next to your campfire now, you can run around and speak to the denizens to get more information, or begin your quest to retrieve your loot and stop Drill Knight by jumping in. Shovel Knight Dig is essentially (an extremely light version of) Rogue Legacy meets Dig Dug, an action platforming roguelike that works extremely well.

There’s four zones to experience in total, with three stages each. With places like a Magic Landfill, Mushroom Mines, and Smeltworks, there’s a variety in visuals and themes as you go deeper. And each time you play through the game, the layouts of each of these areas is entirely different than the last time you saw it, always keeping it fresh and exciting. At the end of a zone, you’ll have a boss to face-off against, and these boss battles are everything you’ve come to expect them to be. Boss rooms receive the randomization treatment where a dirt hill or formation would separate me from the boss initially. My favorite battle was the second boss in its second phase being an overt homage to Rocky Wrench from Super Mario Bros. 3, it’s just one of those things that make you smile as you try not to die. 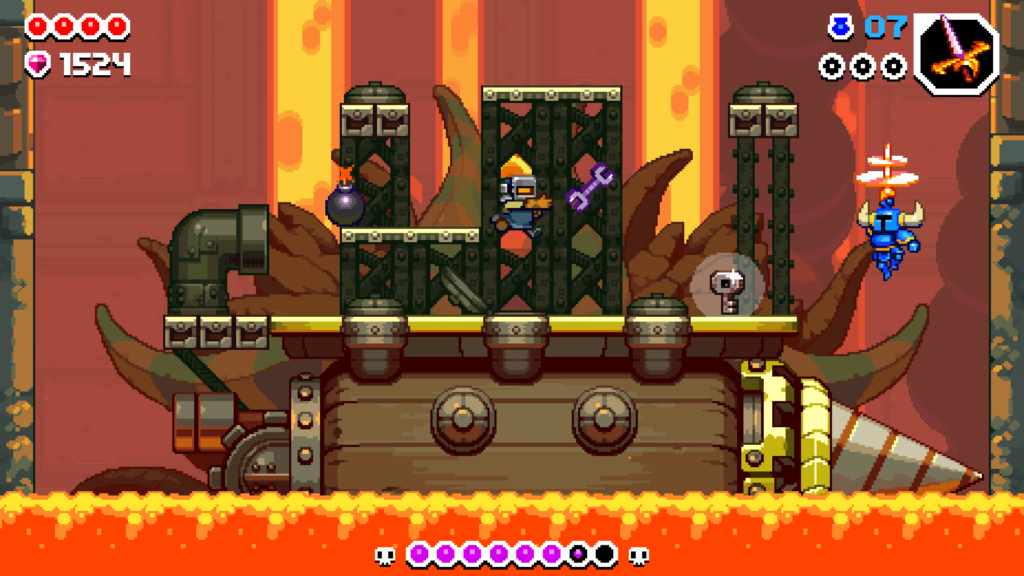 The knight’s trusty shovel is working overtime this time around. You’ll be digging through dirt downward and sideways. If you time it right, you can clear gaps where there’s floating dirt to dig without touching the ground. In addition to moving dirt, you can attack with it or use it as a Pogo stick, perhaps being the more critical move than any time before. There’s a copious amount of enemies you’ll run into across all the zones in the game, to include slimy, flying, charging, and the dreaded gold guards. If you take too long in any given stage, a massive cutter will start ripping through a level, chasing you down until you either die from its one-hit attack, or complete the level. It’s a fairly good reminder to always be on the move while playing, or risk being hunted.

As you delve deeper, you’ll collect accessories essentially power-ups give you a magic attack or bolster Shovel Knight by decreasing damage taken, allow for a faster drop, or increase relic usage to two charges. There are three golden gears to collect during each stage, that at the end will unlock and open the drill capsule that lands during this respite. You’ll have a choice between either getting food to restore your health to full, or to get a random item. Provided you’ve earned the opportunity for this choice, the gears are a worthwhile endeavor to collect if you’ve taken too many hits or as you go deeper. Along the way you might come across shops that sell food items to restore health or more accessories. Other things you’ll find are secret rooms that hold lots and lots of gems, with an occassional trap thrown in. And for those wondering, the Mega Man pausing when transitioning between rooms is perfectly preserved here. 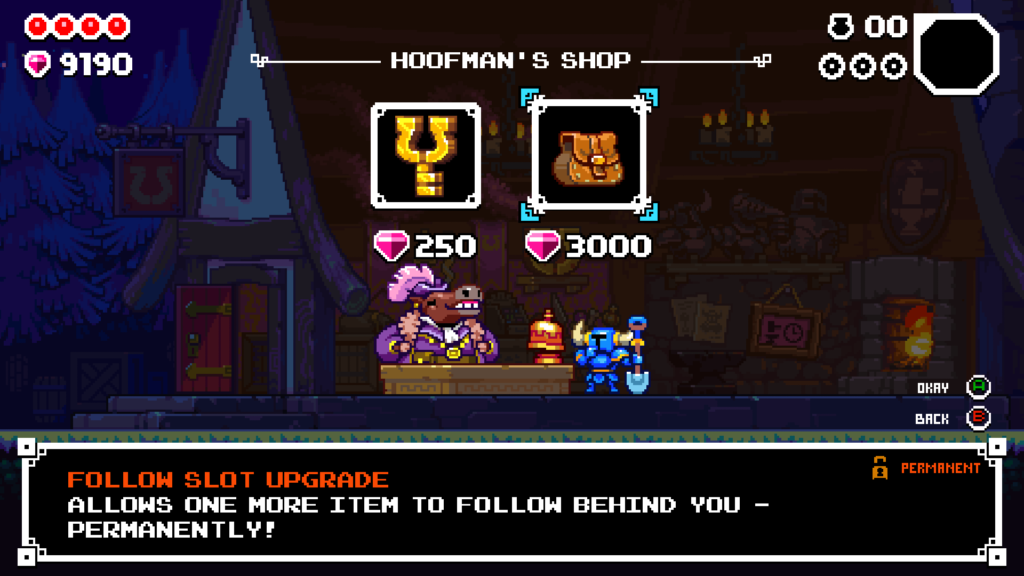 If you thought collecting gems in Shovel Knight or Shovel Knight Pocket Dungeon was satisfying, then wait until you play this, it’s an overdose of gem gathering that’ll become an obsession with ring of the chime. Gems continue to the the major currency here, and is used for everything you want to do for progression, whether temporary or permanent. Upon death, some of your gems are dropped, and can be obtained on a subsequent run (a Shovel Knight staple). The gems that aren’t lost, are banked for you to spend on whatever you want, either it be upgrades or unlocking accessories. You can either return to the surface or immediately dive back in for another run, and without a risk or danger over any unspent gems.

There a couple of shops on the surface that let you help Shovel Knight put an end to Drill Knight. Hoofman’s Shop is likely the first place you’ll come across, the animal with a long face offers one temporary and permanent upgrade for purchase. Once you buy one of them, another will take its place, but at a higher cost at an exponential rate. Next is Chester, his shop offers accessories for purchase that might drop in any given run. Like in Pocket Dungeon, you can buy shortcuts to circumvent the early game. While shortcuts do shortcut the chance to acquire a plethora of accessories to benefit you as you progress, but is unlike others in the genre so that it doesn’t work against you. In most cases you are not worse off by skipping an area or two – so long as you’ve got the cash to buy your way there. 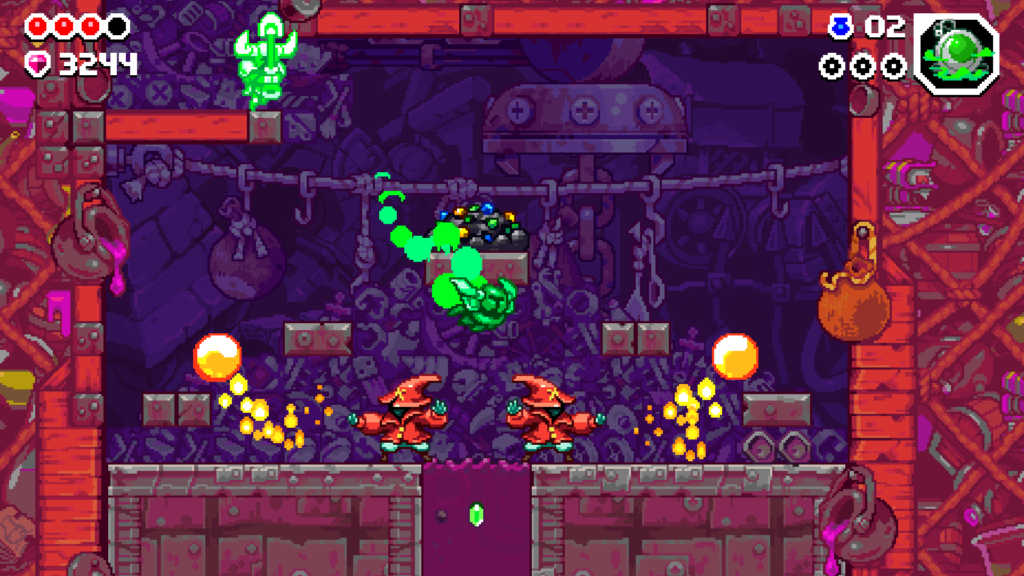 While the bulk of your time is playing through the story, there’s hours and hours of entertainment here. According to one of the feats (achievements), it’s possible to beat the game in under 25 minutes. The game also has daily and weekly runs to participate, with daily runs only allowing one chance, and weekly runs an unlimited number of times to compete for a spot on the leaderboards.

Throughout my time in the game, I only had one bug, and it was one where I simultaneously died and killed the boss at the same time. Upon death, the game casts a spotlight on you and fades to black on the rest of the screen, and the game just would not respond. It existed in this Schrödinger’s Knight state of where I was both alive and dead. I had no choice but to close out of the game, and upon reopening it, knew that I had lost all that progress. After that disappoint, I was able to beat the boss on the next run, but it was a deflating experience. One that did not repeat, and the game has been patched multiple times as of this writing, hopefully addressed.

Shovel Knight Dig is not without accessibility. You can disable the screenshake, or turn on assists like increasing attack damage, the chance that food and gems appear, and even the game speed if things are too hectic for you. It’d be hard to talk about another entry in this series without appreciating the visuals that has the chunkiness of 8-bit using 16-bit colors and shading. As one would expect, the soundtrack is great because Jake Kaufman returns to compose it.

Shovel Knight Dig is an absolute treasure to behold, the visuals are so colorful and vibrant, and the soundtrack is equally as bubbly. It’s a wonderful addition to the lore of Shovel Knight without being clumsy or overwrought. It’s a roguelike doesn’t feel like one, and isn’t a slog to get to the good stuff, as every run is an exciting escapade. You won’t have to dig too deep to find the fun, because Shovel Knight Dig is a worthwhile adventure that feels like an evolution of the series for another reason to adore it.