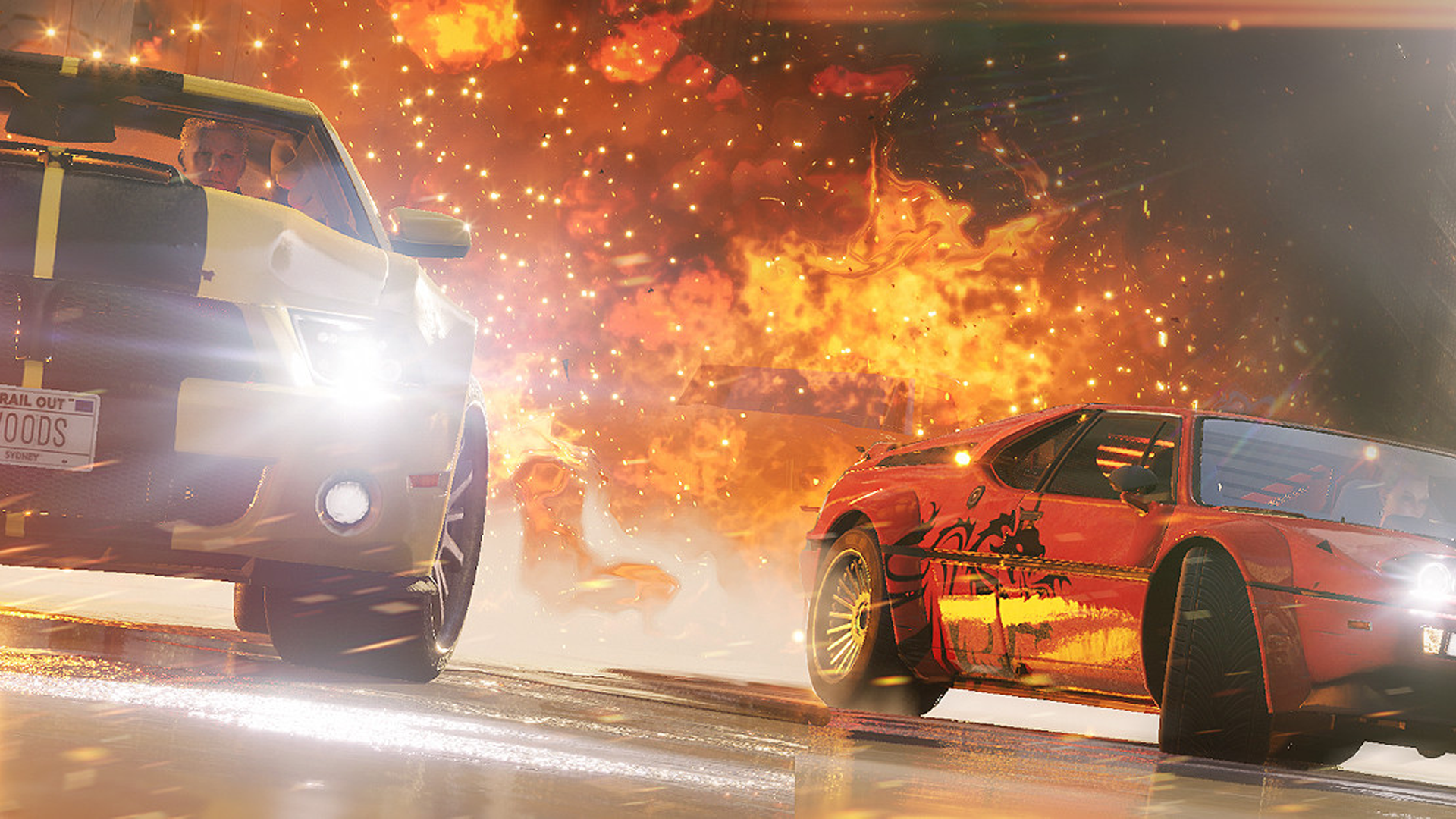 TRAIL OUT was undoubtedly made with love, where developer GOOD BOYS have put forth a solid effort to make the next FlatOut, a potential evolution on that series. That potential is squandered pretty quickly, as the story is forgettable, the voice acting is laughable, and the physics are often unreliable. All that to say, I can’t help but appreciate the game for all that it tries to do, even if it doesn’t itself all the way there. TRAIL OUT is good fun when things are going well for you, but when the fun stops due to unpredictable physics and a grindy campaign, so does the willingness to continue playing. It’s clear from the introductory cutscenes that this was a game where English was not the primary language. And while the translation isn’t always matching the subtitles or how one would speak, there was work put into to trying. The cutscenes tells the story of Mihalych, whose goal is to win the entire festival of races to be a simple story of going from nothing to something. TRAIL OUT is a massive love letter and homage to both video games and movies, unabashedly. The first telling piece is that in order to climb the ranks, you must defeat this Blacklist of eight drivers – which is very clearly the structure of 2005’s Need For Speed: Most Wanted). The cast of characters that make-up your rivals on the Blacklist will certainly strike some similarities. You’ve got Big Cheese, whose bears a striking resemblance to Big Smoke from GTA: San Andreas. Then there’s Yuki Than, who’s basically Suki from “2 Fast 2 Furious”. And then you’ve got Frank Woods, borrowing the name from the legendary Call of Duty: Black Ops character, with the likeness is to that of Chuck Greene from Dead Rising 2 for dual-parallels. There was even a boss battle that was essentially the final car chase sequence from “John Wick”. This kind of thing just put a stupid grin on my face, it’s so blatant and charming to see them just go hard at it.

You’ll be given a choice of cars to start your career, and have to build them by purchasing all the parts like wheels, engines, ECU, and so on. You start out in D class and work your way up to A class vehicles, and there’s around 40 different types from trucks to vans to imports and finally exotics. The types of cars you make can be tuned for speed or durability, and consideration is needed for the events you’ll be partaking in. The actual racing is mostly enjoyable as you’re driving through objects with particles and debris is flying everywhere. It’s unfortunate when the physics get in the way of that, and sometimes you’ll drive over an object that is medium sized, getting flipped upside-down if you’re lucky. If you get spun around or stopped, the gearing can’t get you back up to speed, and you end up wasting so much time getting back in the race. For most of this, there’s a reset button that gets you back on track, but it’s hard to recover from that. I would’ve liked to have seen a rewind feature for when the physics get wonky like that. 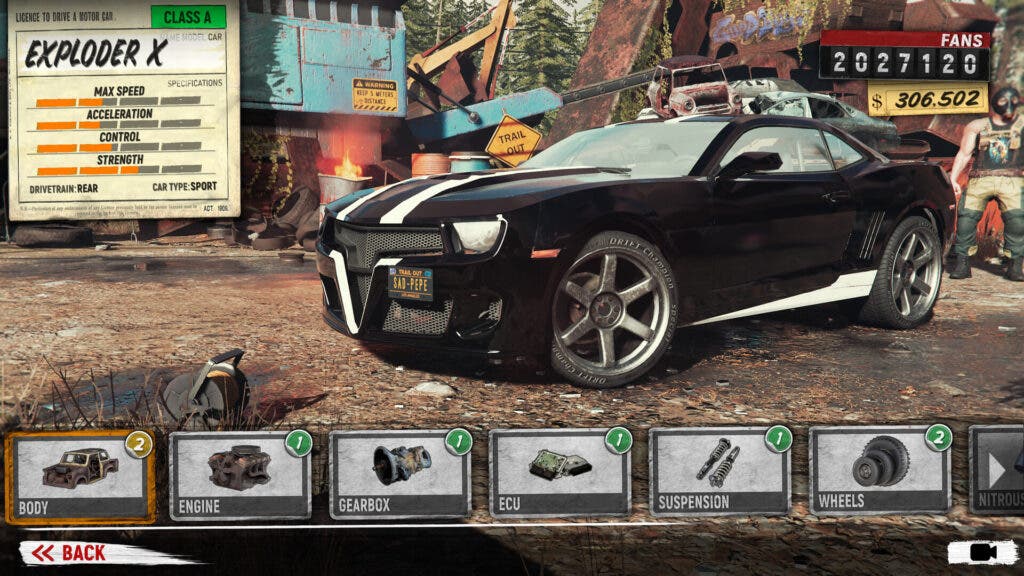 The races themselves are diverse as you progress, though some will repeat in one fashion or another. One thing I found interesting is that all races can be won if everyone else gets eliminated before you reach the finish line or whatever the objective is. It’s rare to be in a situation for that to actually occur, but it’s really satisfying when it does. The most egregious offense that TRAIL OUT has is the fact that there becomes a forced stopping point, require grinding. For whatever reason, simply going through the career isn’t enough to get you the requisite ‘fans’ to move up a tier or to the next challenge, which seems rather imbalanced. You can go to the free race mode to pick something that you like, and get some extra cash and hopefully the fans needed to progress. It’s just such a momentum killer when this happens, and it was too much for me consistently contend with.

New cars get unlocked as you get access to new tiers and garner more fans into your following. The cars start off as shitboxes and slowly become more cars you want to drive that are facsimiles of Mustangs, Camaros, Skylines, and Chargers. To do this you’ll need money, which you’ll get a healthy amount of as you work your way through the career. Since the game is more dependent on accruing fans, there’s a few ways to get them outside of races. FestApp is a way to broadcasts to your fans on an Instagram-like app which hilariously errors out after some time, but not before getting a couple thousand fans along the way. You can also receive donations at any time, and transfer cash from completing challenges or earning achievements. The fan stuff is really an important part of the game that makes a lot of sense, I just wish you got more out of it, it’s a slow trickle the higher you climb in the ladder. 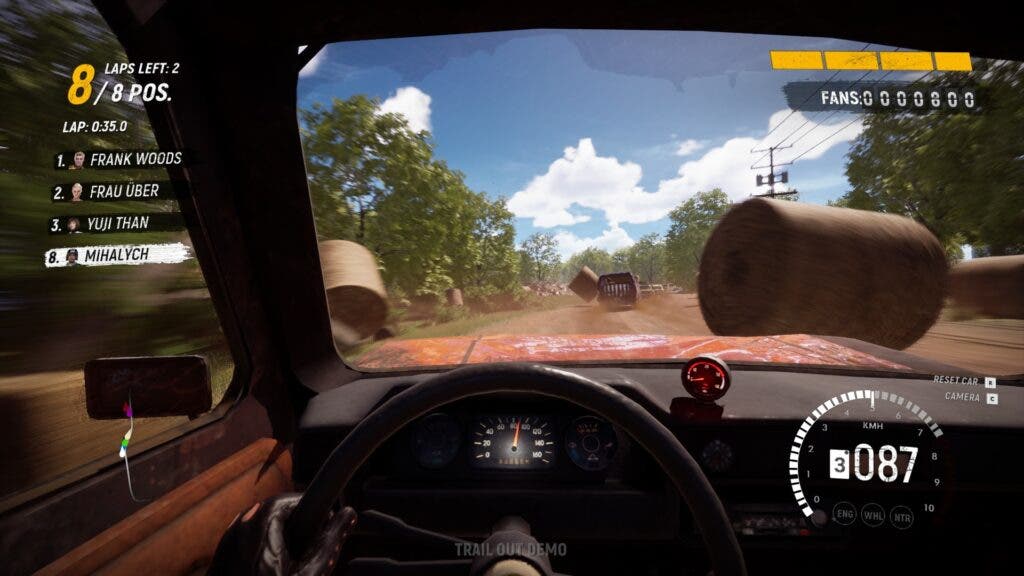 The locations of TRAIL OUT are varied enough, with full-track races taking place in and around Los Angeles, San Francisco, Grand Canyon, and various ports and farms. Then the derby racese derby races take place at lighthouses, atop tall buildings, and parking lots. The demolition events are rather uninspired but do the job, but I definitely knew when I was participating on a track I did not like.

It wouldn’t be a FlatOut-like if it didn’t have mini-games to partake in, but there’s only two: bowling and darts. Admittedly, they are staples from the series it is trying to emulate, and these get woven into the campaign, but I grew tired of them quickly. Darts should be fun but is an exercise in frustration as it requires unrealistic precision. It wasn’t long before I no longer wanted to participate in the mini-games, as they didn’t curry the type of elation I had playing them when they were in the Bugbear games. TRAIL OUT comes with all of the RTX features you would want, like: Ambient Occlusion, Shadows, and Reflections. They all look great when enabled, and the inclusion of DLSS 2.0+ is great as well, which can help balance things out. I was able to have everything set to the max settings and get around 130fps at almost all times. The only times it bogged down was when there were multiple explosions whether it was cars, gas stations, or other factors. Now, if you don’t have a card for DX12, or care – you could also use the equally performant DirectX 11 version of the game. TRAIL OUT is one of those showpiece games for tech demo stuff, but doesn’t offer much else. GOOD BOYS possess the technology and talent to make a well made game, but clearly lack the experience in making it wholly enjoyable. TRAIL OUT asks the player to endure a lot of problems for the pockets of fun you could potentially have. Now, if you can overlook its many rough edges and tedium, it’s essentially the next FlatOut when had in small doses – but Wreckfest this is not. In the end, TRAIL OUT is unfortunately more trouble than it’s worth, and doesn’t come recommended.