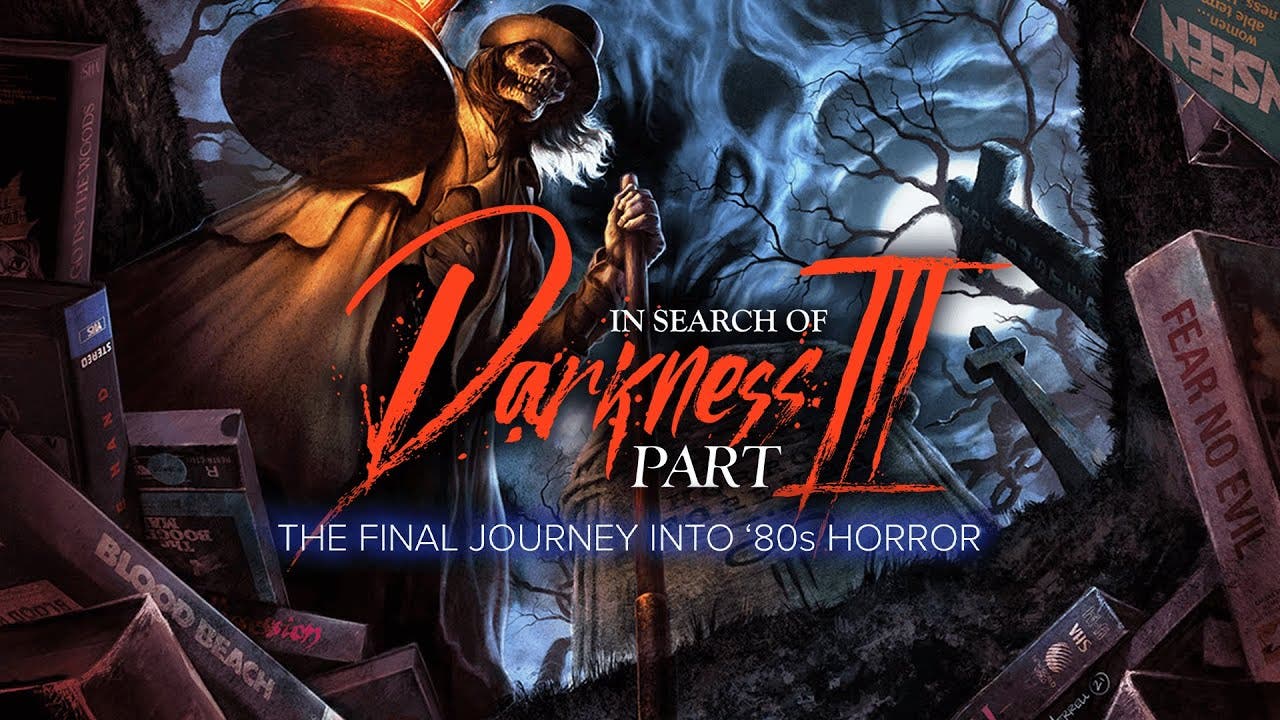 IN SEARCH OF DARKNESS: PART III is a five-plus-hour exploration of a time when horror filmmaking exploded thanks to cable TV and the home video revolution. Packed with quality film clips and interviews, the long-form ‘80s-era documentary dives into 79 impactful and controversial films of the decade, from direct-to-video and shot-on-video bottom-shelf favorites to unsung drive-in and theatrical releases.

Presented in a year-by-year format (1980-1989) alongside larger-context chapters, the superdoc explores the rise of indie horror filmmakers amid the home video boom; the horror backlash during the Satanic Panic; Heavy Metal in horror; marginalization in mainstream content; the influence of Mexican, European, Canadian and Asian horror; the flexibility of the horror genre; visionary directors; artist profiles; and much more.

Featuring interviews with 70 horror experts and icons sharing insider tales of maverick filmmaking adventures and the horror movies they love, IN SEARCH OF DARKNESS: PART III is the ultimate wild ride, a nostalgic celebration of a fantastic era of cinema, capping the critically acclaimed IN SEARCH OF DARKNESS trilogy with a bang.

IN SEARCH OF DARKNESS: PART III is not rated; contains adult themes, violence, profanity and nudity.

“The ‘80s marked a radical change in filmmaking as a result of the home video revolution. The horror genre exploded as crafty filmmakers saw dollar signs and sidestepped Hollywood gatekeepers to land their movies directly on the shelves of local mom-and-pop video stores. As an ‘80s teen, I was the target audience for these bottom-shelf VHS scares that lured me with shocking exploitation box art. IN SEARCH OF DARKNESS: PART III celebrates these highly entertaining, direct-to-video genre entries alongside forgotten theatrical and late-night cable favorites. Featuring interviews with 70 horror icons and experts discussing indie filmmaking adventures, real-world influences, and the horror movies they love, PART III is the perfect cap to the IN SEARCH OF DARKNESS trilogy and our longest installment yet, with over five clip-filled hours of ‘80s horror goodness.”

“IN SEARCH OF DARKNESS: PART III taps into the heart of what makes ’80s horror movies great! This time we journey deep into the underbelly of ’80s horror, the bottom-shelf guilty pleasures from the much-missed VHS stores of our youth. Prepare to have your mind blown as we revisit the craziest and goriest cult classics to hit the small screen! Horror fans helped us curate the titles we’re covering, and we can’t wait to share the grand finale of the most incredible horror documentary series ever made.”

About CREATORVC: An independent producer of community-powered entertainment: long-form factual content that is funded, inspired, and shaped by a dedicated community of fans. CREATORVC projects include the critically acclaimed documentaries IN SEARCH OF TOMORROW; the IN SEARCH OF DARKNESS trilogy; IN SEARCH OF THE LAST ACTION HEROES; and the upcoming documentaries FPS: FIRST PERSON SHOOTER and ALIENS EXPANDED.

For more information go to www.creatorvc.com or visit us on YouTube.