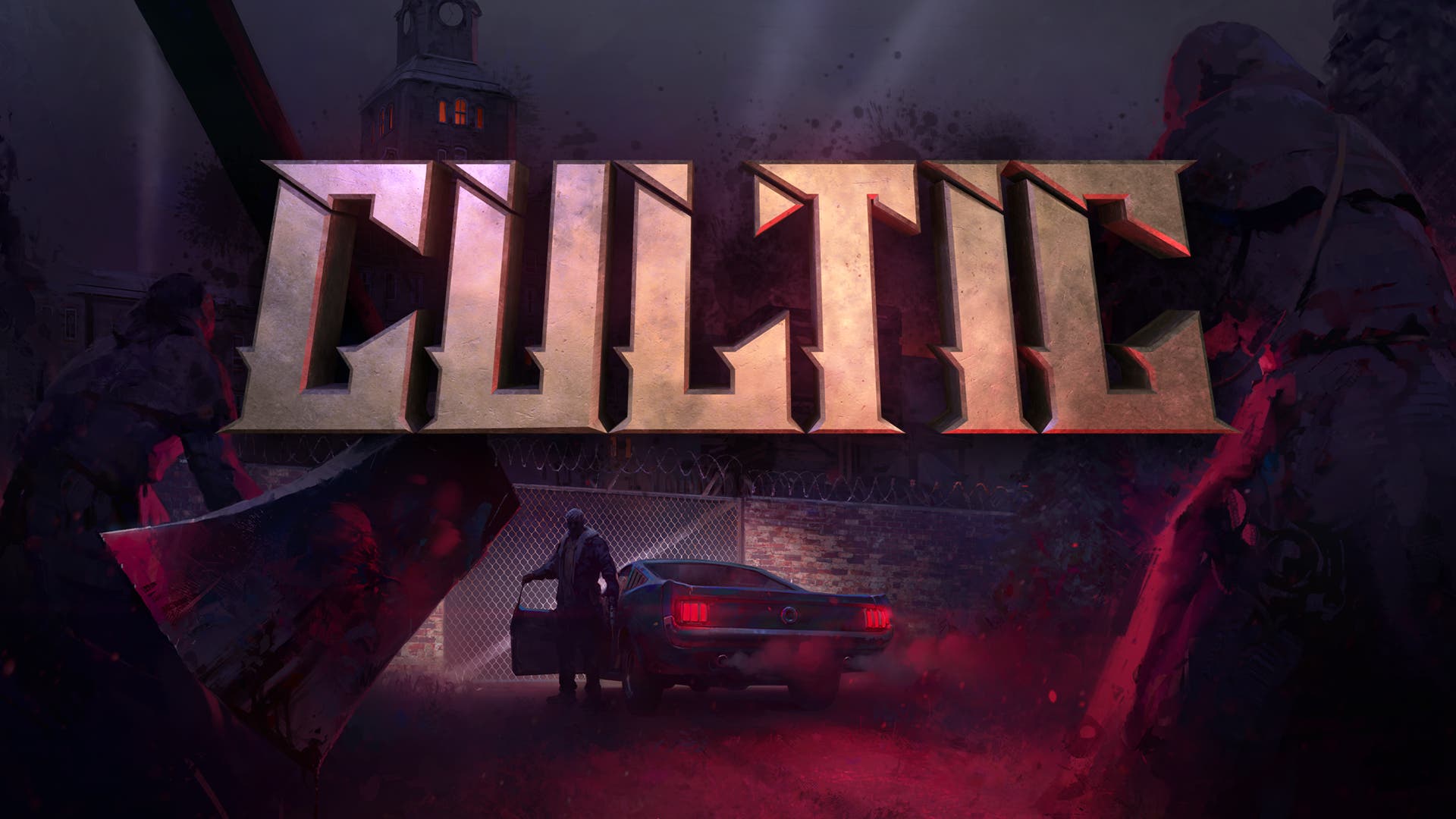 Solo developer Jasozz Games has Blood on the brain, and for good reason. It was the toughest and last of the “holy trinity” of Build Engine games to come from 3D Realms, topped with a horror movie vibe throughout the whole thing. Now with the resurrection of the legendary publisher is something special, a second coming of Blood with the release of CULTIC. It’s among the wave of retro shooters we’ve seen over the years, but this one doesn’t try to use an old engine or stick to a certain style or even nostalgia to get by. CULTIC is a pulpy shooter that’s a completely fresh take on the boomer shooter, and a satisfying one at that 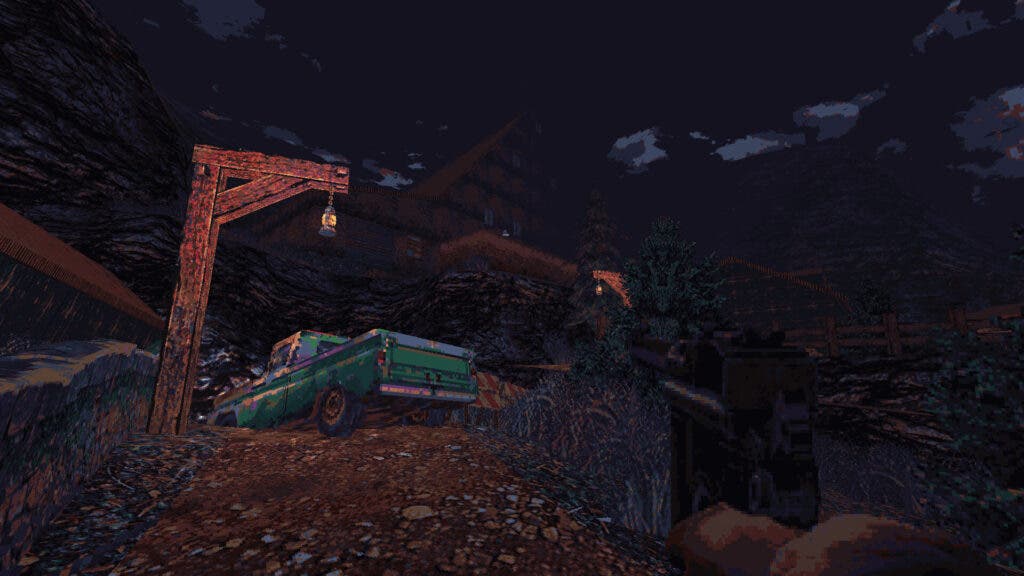 Editor’s Note: This review is based on Chapter One of CULTIC, which is the only chapter available at the time of publishing. Chapter Two will be releasing at a later date as paid DLC to finish out the story.

You find yourself as a failed investigator digging too deep into recent killings in the area. You arrive at the suspected location of these killings, only to be knocked out and left for dead. You awaken in a mass grave, and literally crawl your way out, and with nothing to lose have a vendetta to stop them. Soon enough you’ll be knee deep in cultists, or “fanatics” as they’re called. Lots of blood will be spilled here this night.

There are five difficulties to play on in CULTIC, each with their own description and expectation. Playing on the Standard difficulty, the second of the five, felt like a healthy balance. There’s ten maps in the game, some of them devoted to just boss encounters, but on average you’ll spend about 20 minutes on any one of them. This of course is based on the idea that you’re thorough in exploration and are seeking to kill every enemy. My clear time clocked in at 3 hours and 25 minutes, which is certainly short for a campaign. I was compelled to start a new game on a harder setting, and replay levels I’ve beaten to seek out all its secrets. CULTIC is a game you want to replay again and again, like you’d find yourself doing as a kid growing up in the 90s.

The game has a healthy arsenal of weapons to choose from, but you’ll start off with an axe as a melee weapon, with the ability to throw them. Then you’ll have a range of guns from luger pistols to shotguns and even grenade launchers and lever action rifles. All weapons come from the World War II era, but the game seemingly taking place in the mid 1960s. Another homage to Blood is the plethora of Molotov’s and dynamite sticks that can be thrown. It was my bread and butter when playing through Blood, and will be many other’s fallback as well. A neat feature is that you can also throw them unlit, and shoot them when enemies are near for a controlled explosion. The weapons here are brutal and headshots are rewarded with fountains of blood, sometimes done in slow motion.

CULTIC is certainly a game you can play slow and careful, but it’s more fun when you’re running, sliding, and rolling through a level. As a way to create distance or perform crowd control, you have an effective dedicated kick button like Duke Nukem for that purpose. The game’s good about having lots of interactables like switches, levers, and being able to break grates. You can also bash boxes apart and even pick-up objects, if you want, and I had such an action movie moment. I had softened up a cultist with my pistol, and was getting caught on a wooden chair so I picked it up and threw it at him just to create space, but it killed him. It was such a highlight, and happens a lot throughout the course of the campaign. 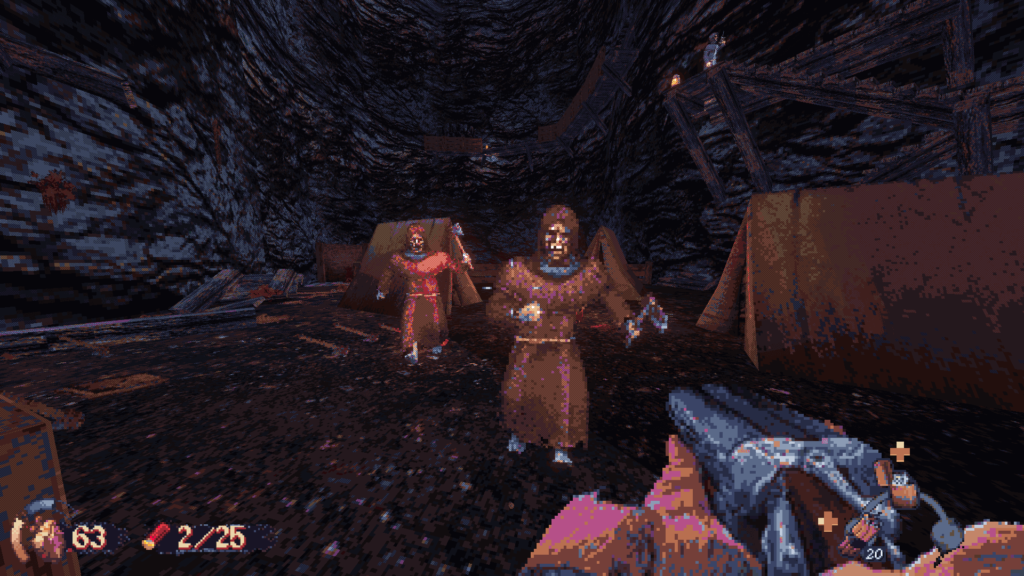 Playing through CULTIC can feel kind of samey, as the visual aesthetic and color palette doesn’t change, even though the locales do. You begin in The Grave, which is full of disorientation and discovering a compound full of cultists. The Shipyard introduces the player to underwater sections, and how to navigate tight spaces. The Crypts are dank labyrinths that also focus on close quarters, so you’ll die often to hail of gunfire if you’re not careful. Then you’ve got The Excavation Site, which adds verticality. It does feel like you’re progressing through an interconnected area, and all the maps are great in their own ways, but tend to blend into one another.

This might be a bit surprising, but you’ll have an inventory during Chapter One. While one part of it is just for your weapons and throwables, the rest is for key items like valves, levers, and a health kit. Once you heal to your current maximum, the rest that you pick-up goes into the satchel to be used later. It’s a life-saving feature I couldn’t live without when it came to the final boss. Early on, you’ll go into dark areas, a lighter is provided to help illuminate. Cleverly though, it limits your weapon usage with only the pistol able to be used semi-effectively. Halfway through the game, the lighter is upgraded with a proper lamp which does not hamper using weapons. I really love the evolution of the retro shooter here, and it all feels natural and not out-of-place. 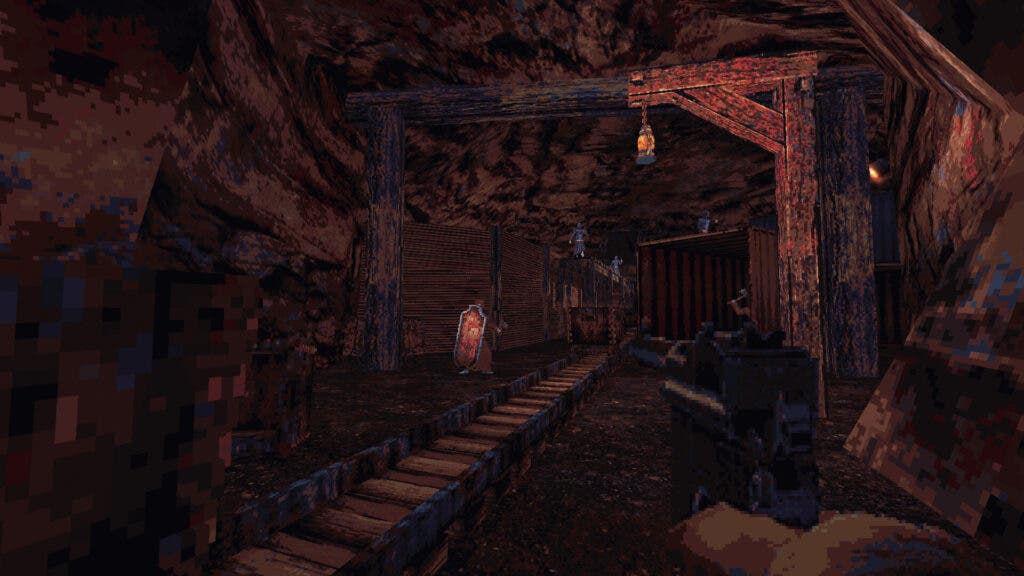 CULTIC has lots of secrets to discover, like all good shooters should. You’ll know them when you see them, but at the end screen, it’ll tally your kills, secrets found, and total time in the level. You can use this to decide if you want to replay the level to seek out what you’re missing, which will entice the completionists. One time I managed to kill more enemies than were there, achieving over 100% somehow.

When the campaign is complete, and until Chapter Two arrives, is the Survival mode. There are three maps plucked from the campaign set that offer large arenas to fight in: Graveyard Shift, Miner Problems, and Asylum Action. At the jump, you’ll buy your weapons and ammo, and then fight waves of enemies with the resources and skills at your disposal. When there’s downtime, you’ll upgrade your weapons to make them more effective. It’s rather simple mode, but it offers the best CULTIC has to offer with regards to combat, and you keep going until you can’t. You can also submit your scores to a leaderboard, which is sorted by difficulty. 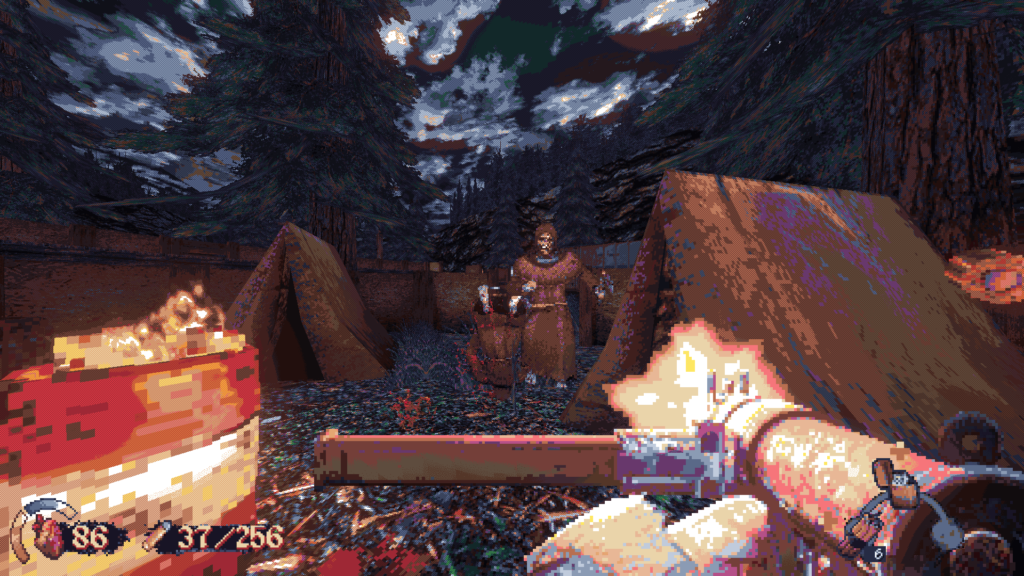 The colors that dominate the look of CULTIC is comprised of oranges, blues, and browns. It’s a game using a modern engine and tech like bloom and physics, but uses old-school techniques like dithering for its presentation. I’m not fond of the FOV style this game offers, where the gun and on-screen elements are of a certain size, and everything is zooms out. I thought this might be a problem, but as susceptible to motion sickness as I am, never was an issue throughout the whole time I played it.

I don’t usually opt to purchase the soundtrack of a game, but I’m convinced otherwise. CULTIC spans a variety of arrangements throughout the game like piano, strings, and synth. Each level has its own theme, and sometimes these songs repeat if you tend to scour levels for secrets, but they’re all really good. It’s all memorable and capable of being an earworm if you’re not careful, this soundtrack is so good. 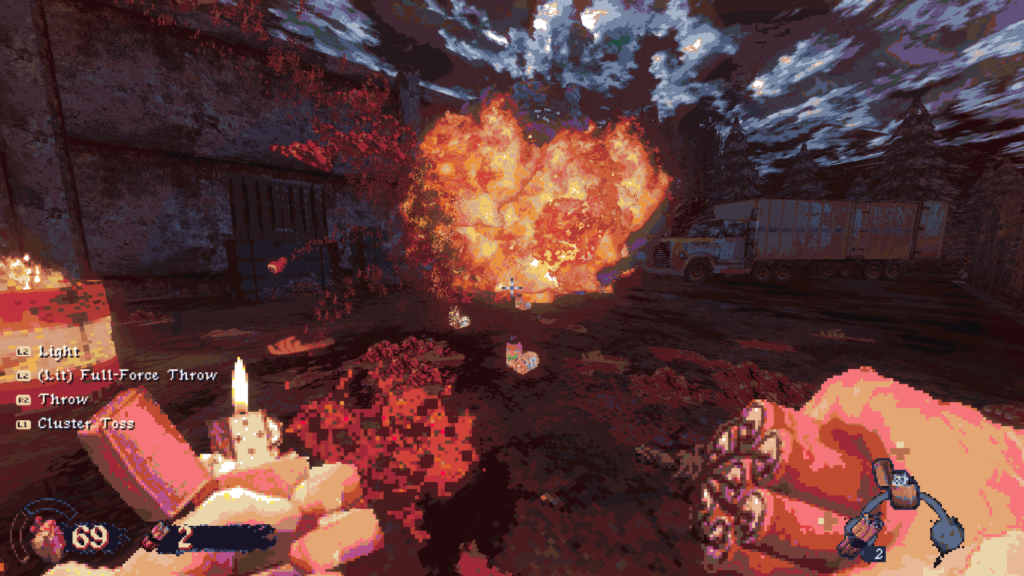 CULTIC is off to a great start, with Chapter One being an assortment of excellent combat, familiar enemies, and sometimes samey levels. It’s perfect to dig into for this Halloween season, and has a really great atmosphere that can’t be beaten. I’m eager to return to this when Chapter Two is released, as this is only half the story, making it feel a little incomplete. Chapter One of CULTIC offers a Nu-Blood experience, lots of replayability, and tons of memorable and emergent gameplay moments.