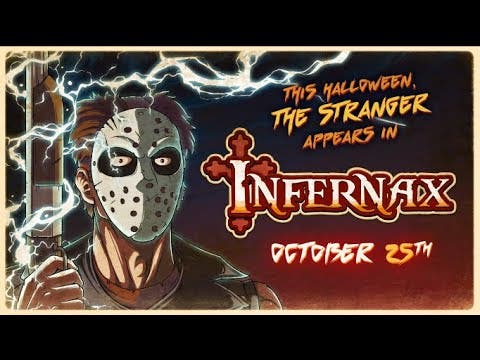 PARIS (Oct. 24, 2022) – Highly rated indie splatterfest Infernax from The Arcade Crew and Berzerk Studio gets a new playable character tomorrow, complete with a retro horror inspired hockey mask. Introducing The Stranger, a deadly force to be reckoned with, armed with a shotgun and a multitude of blunt objects capable of producing extremely satisfying levels of gore as you take out your enemies. The Stranger is unlockable off the bat by starting a new save file on Steam, Nintendo Switch, Xbox Series X/S, Xbox One or PlayStation 4.

Originally launched earlier this year, Infernax is currently ranked 84/100 on review aggregate website Metacritic and has been praised by fans and media alike for its challenging gameplay, solid mechanics and old school 8-bit nostalgia done right.

The game’s classic NES-era style you know and love puts you on a gore-fueled journey after you return from battle to find your homeland ravaged by an evil force that you must overcome if you are to save your people from the terror and darkness that’s overcome them in your absence.

Demon slayers eager to trade a mace for firepower can unlock The Stranger by naming a new save file’s character “stranger”. You’ll then don your sweet hockey mask, fully ready to face horrors beyond the kin of man, and hopefully turn them into a bloody pulp using your not so medieval arsenal of unlikely weapons. The badass shotgun that the Stranger comes equipped with packs a serious punch, both to the receiver and the giver. So be wary of where you use it ‘cause the kickback is real y’all. Wouldn’t want you to fall into the abyss right after exploding some demonic vermin; that would be a real shame.

With secrets to unlock, powerful abilities to learn, and an assortment of spells in your arsenal, you’ll be ready to face whatever lurks in the shadows and truly give em’ hell. Along the way, your morals will be tested by difficult choices that will shape not only the fate of Upel, but the fate of The Stranger or Alcedor themselves, leading to different gameplay paths. The challenge that lies ahead is not for the faint of heart, but Infernax offers both a classic hardcore mode and a more forgiving (but no less challenging) casual mode, for maximum enjoyment no matter how you play.

Infernax is available across Steam, Nintendo Switch, Xbox Series X/S, Xbox One or PlayStation 4 for $19.99. Court the latest updates on Infernax by visiting https://www.infernax.com/, wishlist the game on Steam (https://store.steampowered.com/app/374190/Infernax/), and send your love to @TheArcadeCrew and @berzerkstudio by sharing all their posts on Twitter.