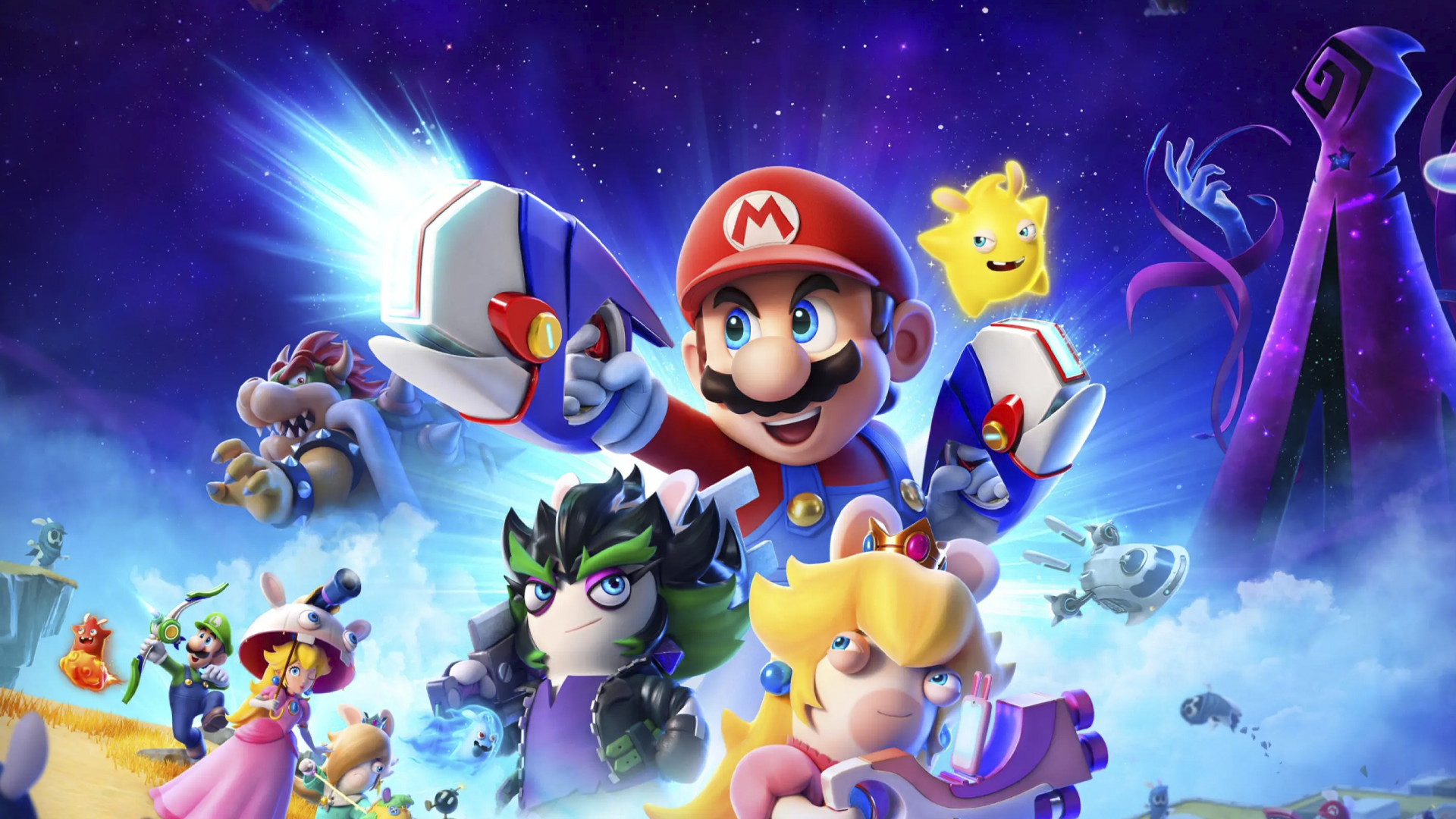 In one of the most surprising and unlikely crossovers (and genre mashups) ever created, 2017’s Mario + Rabbids Kingdom Battle proved to be an exciting, fresh take on the turn-based tactics genre that was almost universally adored. It was one of those titles that felt like it was lucky to even exist, and that we were all lucky for having the opportunity to play. The story of how Mario + Rabbids came to be was certainly a long one, and nobody will forget the scene of the game’s director, Davide Soliani crying during its unveiling at E3 in 2017. So understandably, the prospect of a sequel to something so improbable is a tantalizing one, but does Mario + Rabbids Sparks of Hope deliver on its potential, or was Kingdom Battle just lightning in a bottle? 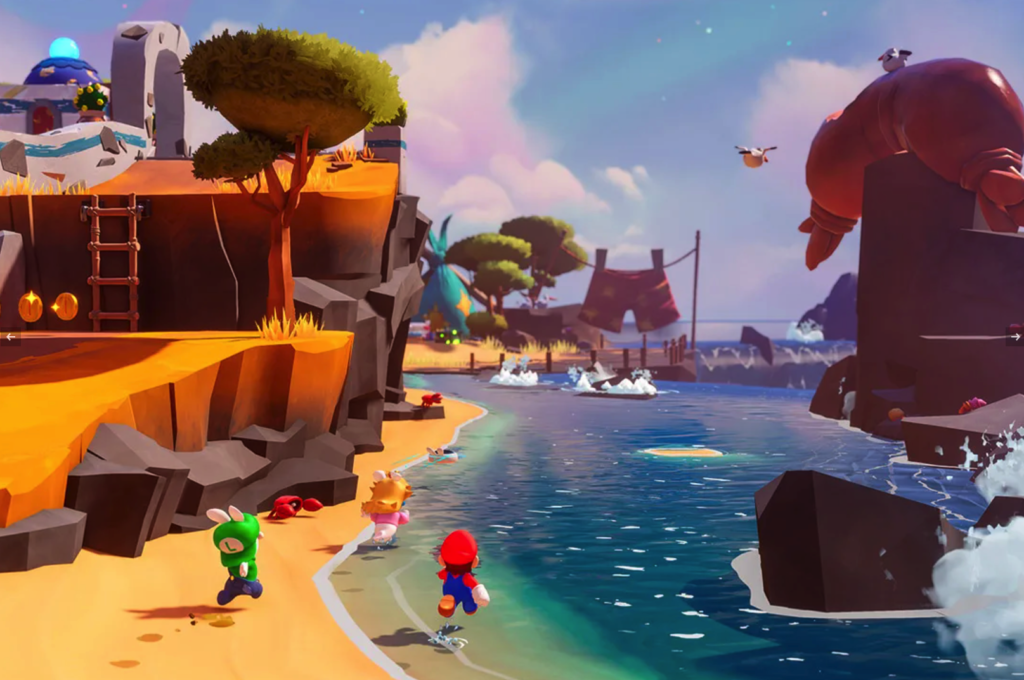 It should be no surprise at all that Sparks of Hope absolutely brings it home, doubling down on everything that made Kingdom Battle great, and adding more to the formula to make it simultaneously feel even more at home in the Mario universe while also further establishing its own unique identity. This is an incredible tight-rope act that the game is walking and the team behind it has skillfully done the unthinkable once again and given us an incredible gift, neatly wrapped and thoughtfully presented.

Where Kingdom Battle played with the idea of how to make a compelling turn-based tactics game within the context of the Mario canon without breaking what fans know and understand about the franchise, Sparks of Hope has a lot more room to push boundaries and explore new ideas. In Kingdom Battle, the overworld felt like overworld maps from the NES-era mario games, set up in grid-like layouts with clearly-defined paths in areas themed heavily on the various locales of the Mushroom Kingdom. Battle arenas were integrated into the overworld environment itself in most cases, but the evocation of the more nostalgic form of Mario level design a la New Super Mario Brothers was a crucial part of establishing the familiarity necessary for the tactics mechanics to work. UI elements felt lifted right out of the Mario games’ design language, musical cues leaned heavily on Koji Kondo’s iconic work, and the entire package was distinctly Mario, with some Rabbids zaniness sprinkled in generously for flair and whimsy. In short, it felt as much like a Mario game as possible in as many ways as possible, so that the completely different play style wouldn’t break your brain. It was smart, thoughtful, and extremely well balanced.

Sparks of Hope takes the trust established by its predecessor and uses that to bring the franchise into a more modern design, using more open-ended overworld locations that mix the concept of map nodes that take you to battle locations, and battle arenas being built into some of the more linear areas, which serve as something more akin to dungeons. And because you are presumably already familiar with this franchise, these shifts all work really well, and in most ways the constraints of needing to adhere so closely to the Mario “feel” being lifted serve Sparks of Hope very nicely. 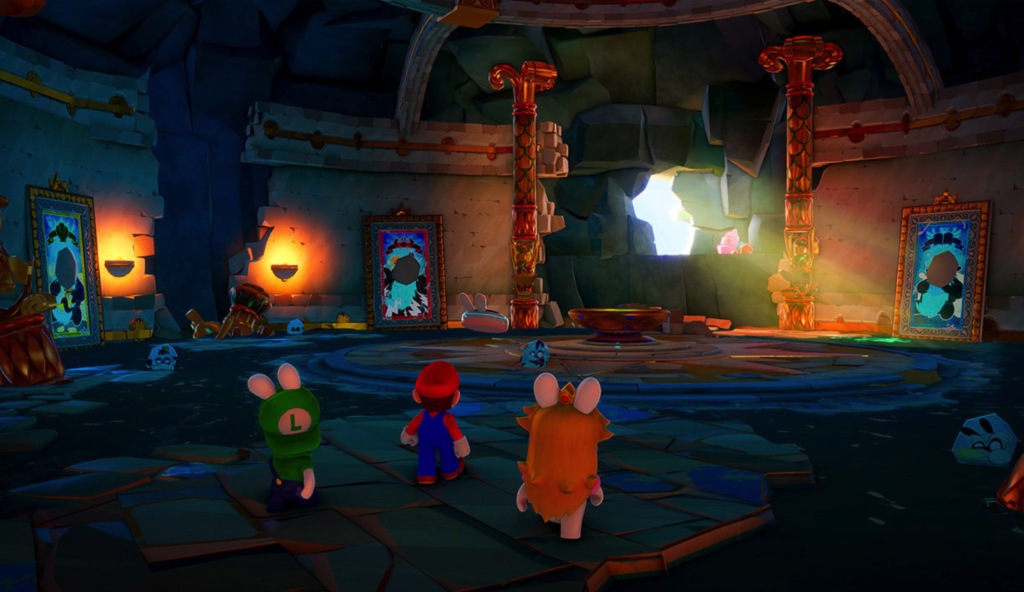 Almost every aspect of Sparks of Hope has been overhauled. The battle UI feels fresh and less traditionally cartoony, character movement on the battlefield uses a radial range rather than a stricter grid, and in a lot of places the overall UI and design is more minimal, opting for brightly colored geometric outlines for buttons and menus rather than the heavily stylized Mario theming on most of the interface and menus from Kingdom Battle. It feels cleaner, more contemporary, and not necessarily more mature, but more fully realized as its own entity.

Combat plays out similarly to the previous games, with the standard turn-based tactics features all being here, but with some clearer definition around the various actions and abilities each of your team members can perform each turn. Most of the same rules still apply from Kingdom Battle, but there are now discrete pips in the UI for a character’s primary actions (you get two per turn), your movement/dash action that lets you slide through enemies on the battlefield as a separate attack (you get one of these), and your jump action. Some of these counts can be augmented by character upgrade trees, but the increased clarity and communication to the player about everything they could possibly do on a turn is a welcome improvement and helps to give you a slight strategic advantage in terms of maximizing the effectiveness of your turn. 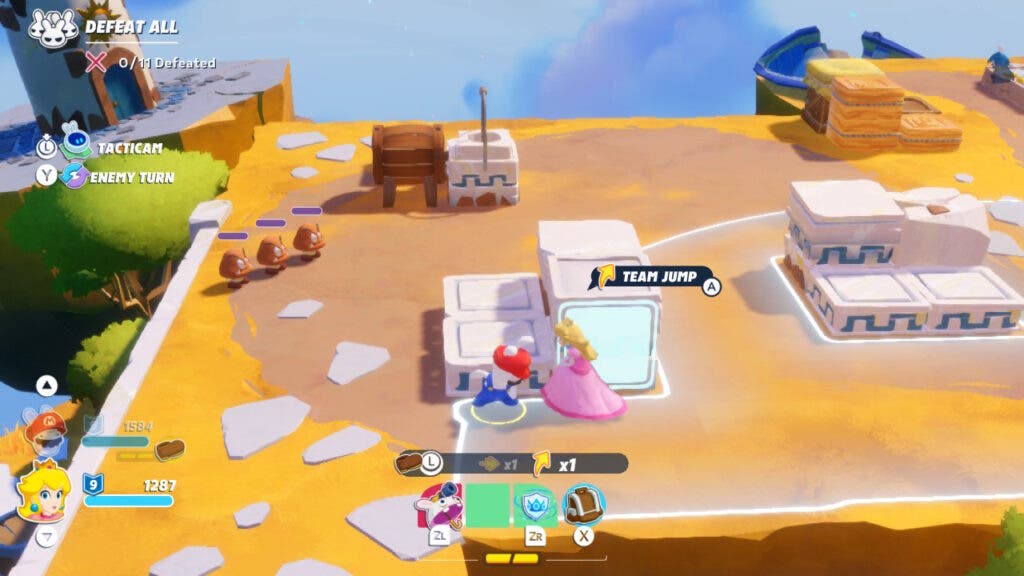 Battles are still as fun and rewarding as ever, and beating up on the various silly (but still threatening!) enemies is more of a fun puzzle-solving exercise that feels generally weighted in the player’s favor, as opposed to the stressful, extremely high risk decisions and scenarios in something like X-COM or even Fire Emblem. The focus is less on “how do we make it through this alive,” and squarely on “how do I satisfy the conditions laid out in front of me and achieve victory,” which frankly feels a lot more fun to play for longer stretches of time and of course fits well with the game’s more whimsical, younger-leaning themes.

I would go so far as to say that Mario + Rabbids are definitely intended to target a younger audience, or at least the default difficulty curve certainly suggests so, as it’s pretty easy to get into a groove where you’re feeling mostly unstoppable. You can of course crank the difficulty up to something more challenging if you want to spend more time min-maxing your turns, but for me the fun here is in getting the quick dopamine hits from successful battles and getting to continue exploring the rich worlds ahead of you. The process of running around and just being in the Mario + Rabbids universe is enjoyable enough by itself, and the rhythm between battles and exploration is really well paced overall in Sparks of Hope. 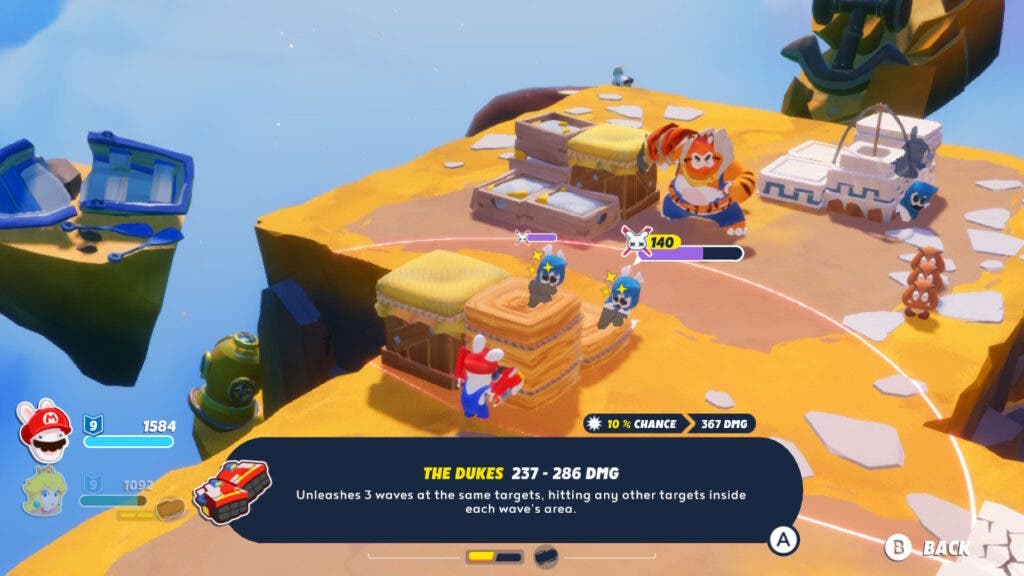 Thematically, all of this is well justified as you’re no longer bumping around in the Mushroom Kingdom, but are exploring the galaxy, where all bets are off and the rules can understandably be different, especially given that the locations you explore in Sparks of Hope are rampant with Rabbids. It’s their turn to get the focus this time around, and there’s even a new, dark and brooding Rabbid named Edge who joins your party relatively early to help give the Rabbids some more dimension as a species.

In Sparks of Hope, Mario, Luigi, Peach, and the rabbid gang are on a galaxy-spanning adventure to rescue the Rabbid/Luma hybrids dubbed “Sparks” and save the galaxy from the clutches of the evil and vastly powerful Cursa, a seemingly Galactus-level big bad who, surprise surprise, wants to spread darkness (or rather, “Darkmess”) over and control everything in existence. While not the most original motive for a villain, it’s still a compelling one as the stakes are astronomically high, and the connections drawn to Princess Rosalina, the lumas, and other elements of some of Mario’s more recent adventures help continue the thread of overall modernization in Sparks of Hope.

This is also one of those games where, even in 2022, I’m really impressed by just how much visual quality the team at Ubisoft is wringing out of the Switch’s hardware, which is getting pretty long in the tooth at this point. It’s a testament to the capability of the Switch as a platform, given a team that is able to put in the time and effort to show what it can do. But truly, even five years on after the console’s debut, this is a really fantastic looking title and it runs at a smooth, seemingly locked 30FPS, which given the overall fidelity of the graphics is impressive. 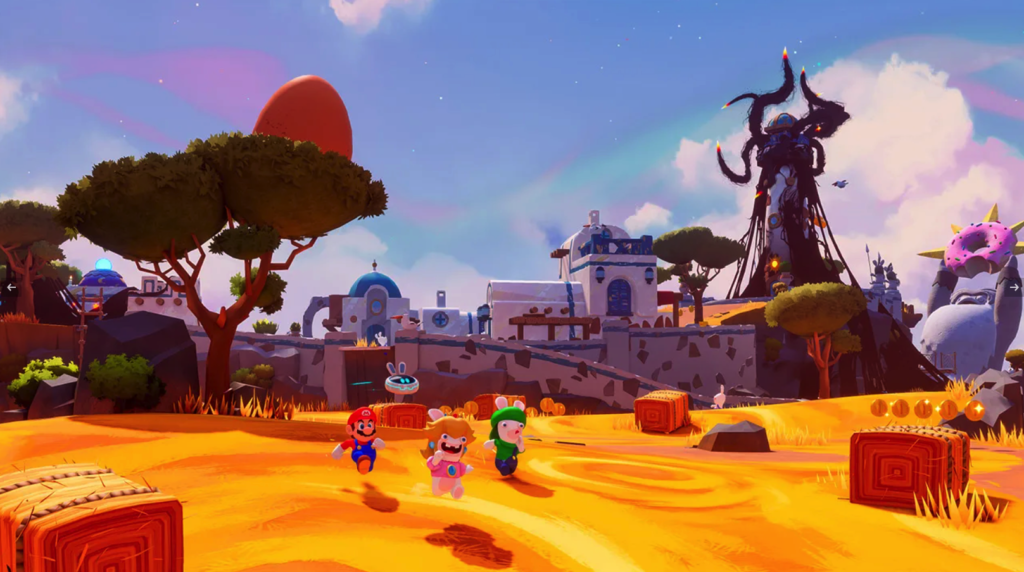 Mario + Rabbids Sparks of Hope is just a downright fun and adventurous game, one that continues to bring the turn-based tactics genre to a wider audience and also makes its own unique mark in the gaming space. There’s just so much to love about this game, and it’s incredibly easy to recommend it to anybody who’s a fan of tactics games or Mario games. It’s a great one to kick back with and play in short or long sessions, and really the only thing holding it back in any way is that the source material naturally limits the depth and nuance of the story that the game can tell beyond the fairly standard “big bad villain wants to ruin everything” structure. And that’s okay; this is a Mario game after all, a franchise built on big bads wanting to ruin everything over and over again. We don’t come to Mario games for the story (usually), we’re here for the cute, whimsical setting and characters and the highly polished gameplay. Sparks of Hope is a fantastic follow up to the original Mario + Rabbids that meets or exceeds it in every way, and once again it is a title that we are lucky to have the opportunity to play.