Sackboy is most notable for being the face of the LittleBigPlanet series of games for the PlayStation brand. Sackboy: A Big Adventure is a spinoff game for the lovable plush figurehead is really enjoyable for players of all ages. From its simple controls and gameplay to its colorful and detailed visuals, there’s a lot to like, and plenty to do here. At its core, Sackboy: A Big Adventure exemplifies the joy of gaming to the fullest, and proves 3D platformers have more to give. The yarny and plushy look to Sackboy is undeniable and irresistible, you have to love him. Unfortunately the big villain Vex doesn’t, and takes things from Craftworld, sending it into disarray. This forces Sackboy to step-up and set out to restore what’s been taken, in what is clearly his biggest adventure yet. The premise is simple, but it’s enough to get everyone at home in the mood to go out and fix what Vex breaks. The resulting adventure is that the shift from 2.5D to 3D was the right decision for this game.

Playing the game on PC with a DualSense controller just makes sense, and feels good. I did play this with an Xbox Series X controller, and it felt equally good, but the bonuses of a DualSense like the rumble and speaker action is too good to ignore if you have it. This is one of those games where it just feels good to play, it reacts properly to each movement and nothing feels floaty. The controls like a lot of the game is straightforward, you have a slap button for basic attacks, a roll, jump, and a grab button for more complex areas. There are enemies who can damage you, take too many hits and you’ll lose a life and be sent to the last checkpoint you cleared. The game’s levels operate on a life system, which you can restore the number of lives as you progress. 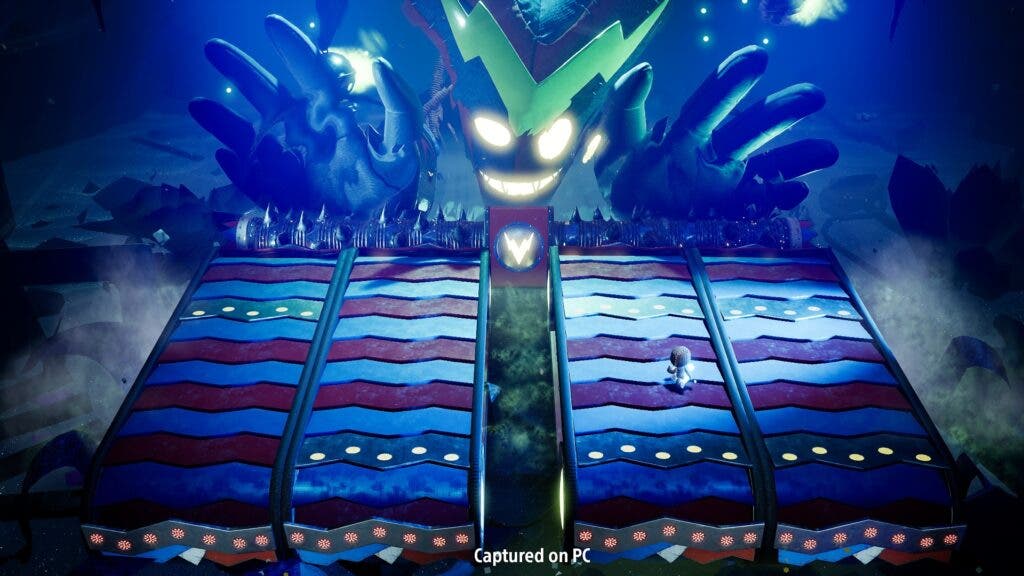 There are five worlds across several biomes to explore. Most levels rate you based on accruing a certain number of points based on orbs you collect. Sometimes you’ll just have to collect keys, other times it’s a boss fight. One of the earliest surprises is that there are music levels like it’s Rayman Legends, and going through a well-timed level listening to “Uptown Funk” was really fun. Sure it’s a song we’ve all heard maybe too much, but in the context of the game works really well here. Once you’ve reached the final level of a world, you’ll face-off against Vex in a boss fight until the finale. At the end of a level, the game will tally up all the things you’ve collected, the points you’ve earned, and give you a trophy to hold while it takes your picture in celebration. It’s really satisfying to get everything in a level, as long as you take the time to explore.

Sackboy: A Big Adventure does do some gating for your progression, requiring that you pick up enough dreamer orbs to unlock the next area. I never found this to be a hinderance in most cases, but it doesn’t feel as free-form as you’d like. You can replay levels as much as you want, even if you manage to get everything in a level, though the orbs you collect are finite. While I typically don’t, I really liked the time trial levels that test Sackboy as a “Knitted Knight”, and is great to compete for the best time. The game features seamless co-op for both online and off, meaning it’s essentially no effort to get someone to play with you. For offline play, another controller with someone next to you on the couch and they are in. You can invite a friend, or search for a random partner at any time with the matchmaker. You can play any level in co-op, but there are some levels that demand cooperation between two players.

There’s lots of collectibles around costumes Being able to dress up your Sackboy to your liking is one of the most endearing aspects of the game. For most of my time, I rolled with a special PC outfit that put Sackboy on a CRT screen with mouse gloves. But I was unlocking Yeti, Red Riding Hood, and even Uncharted costumes to mix ‘n’ match to my heart’s content. This isn’t a feature most would overlook, as you start a new level, the game will present you with an option to select and outfit to jump in with. Sackboy: A Big Adventure benefits greatly with ray tracing here. The textures are so lifelike, it really feels like you can touch it, especially the fuzz. After using the NVIDIA GameReady drivers, the game runs like a dream with everything set to the max and all of the ray tracing on ultra. I was able to get around 120fps in most areas, and using DLSS helps smooth out any inconsistencies in my experience. There were issues with stuttering, but recent patches seem to have smoothed them out. It’s a gorgeous and smooth game in 1440p, and the high framerate really does wonders. Sackboy: A Big Adventure is not revolutionary or iterative for the genre, but it’s just a solid and casual platformer. Sackboy is a Sony mascot I’m the least familiar with, though is one of my favorites next to Astrobot. While it is very much a stylized game, the way the colors, material, and textures all come together make it so pretty to see in motion. Sackboy: A Big Adventure is simply a wonderful 3D platformer that will delight everyone of all ages for dozens of hours.