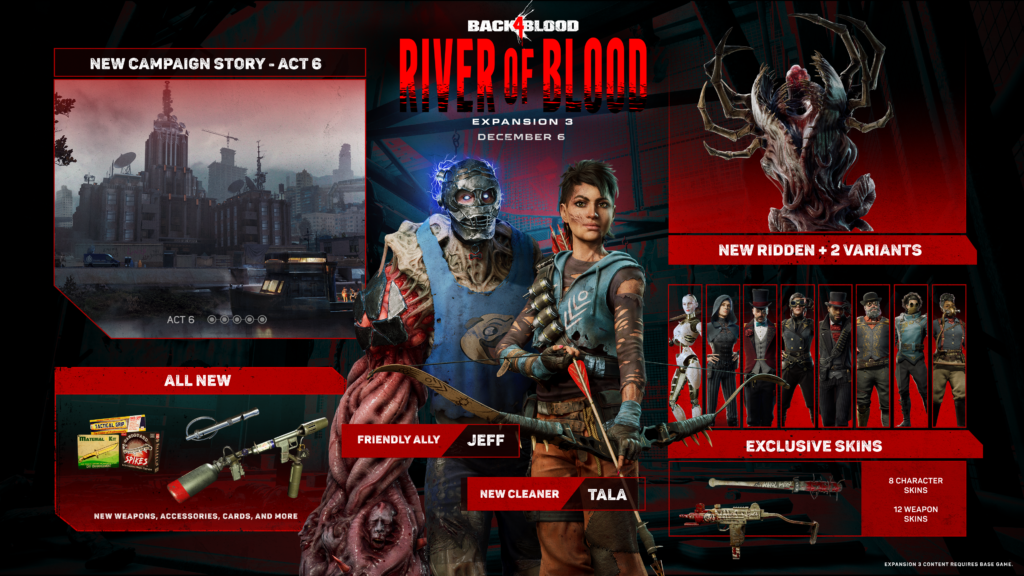 Warner Bros. Games and Turtle Rock Studios today announced details for the next major Back 4 Blood downloadable content (DLC) expansion, officially titled River of Blood. The upcoming DLC expansion is scheduled to release on Dec. 6, 2022, as part of the Back 4 Blood Annual Pass, Back 4 Blood: Deluxe Edition, Back 4 Blood: Ultimate Edition, or via standalone purchase.

River of Blood will feature a brand-new story campaign with an enthralling five-map mission that has players traveling upriver, stopping at different points along the way to collect supplies and take on new enemy threats. To better assist the Cleaners with this mission, the expansion introduces Tala, a former cultist outcast now turned Cleaner who is accompanied by a Ridden companion named Jeff, a friendly Tallboy that can be summoned to assist the team. Jeff causes ultimate mayhem when called upon via whistle by Tala or other Cleaners on her team. River of Blood also includes eight exclusive character skins and 12 exclusive weapon skins, along with new weapons, accessories, and cards.

Additionally, Trial of the Worm will be available as a free update for all Back 4 Blood owners and will release alongside the River of Blood expansion. Trial of the Worm is a cooperative PvE mode where players determine their path down a four-map chain while earning Supply Points along the way. Players can add Corruption Modifiers or choose the more vigorous paths to increase difficulty and boost the amount of Supply Points rewarded. Those looking for a challenge or a more customized difficulty can work towards completing Trial of the Worm with a high score to earn a top spot on the online leaderboard.

Lastly, the Back 4 Blood Holiday Event returns from Dec. 6, 2022 through Jan. 4, 2023 where players can enjoy festive decorations in Fort Hope, listen to holiday music at the jukebox, and grab holiday skins, emblems, weapon skins, and sprays. More details will come at a later date.

River of Blood follows the previously released Children of the Worm and Tunnels of Terror DLC expansions that are available now.

Back 4 Blood is a first-person co-op zombie shooter from critically acclaimed developer, Turtle Rock Studios, available now for Xbox Series X|S, Xbox One consoles, PlayStation 5 and PlayStation 4 consoles, and PC. The Back 4 Blood story takes place after a catastrophic outbreak where most of humanity has either been killed or infected by the parasitic Devil Worm. Hardened by unspeakable events and emboldened to fight for the last of humanity, a group of apocalypse veterans called the Cleaners have rallied to take on the infected horrors known as the Ridden and reclaim the world.