McPixel 3 is the follow-up to the 2012 indie darling from one-man developer Sos Sosowski, and it’s a welcome return. Astute observers might notice that the second game was skipped, which is explained in a mini-documentary you can watch. Instead of pondering about what we didn’t get, we can then focus on what we actually do have, and it’s a wonderful palate cleanser of a game. Following the adventures of the relentless hero that needs to save the day, is the eponymous McPixel, who does everything to save oneself from harm. McPixel 3 is silly, unconventional, and is honestly one of the most entertaining games of the entire year. 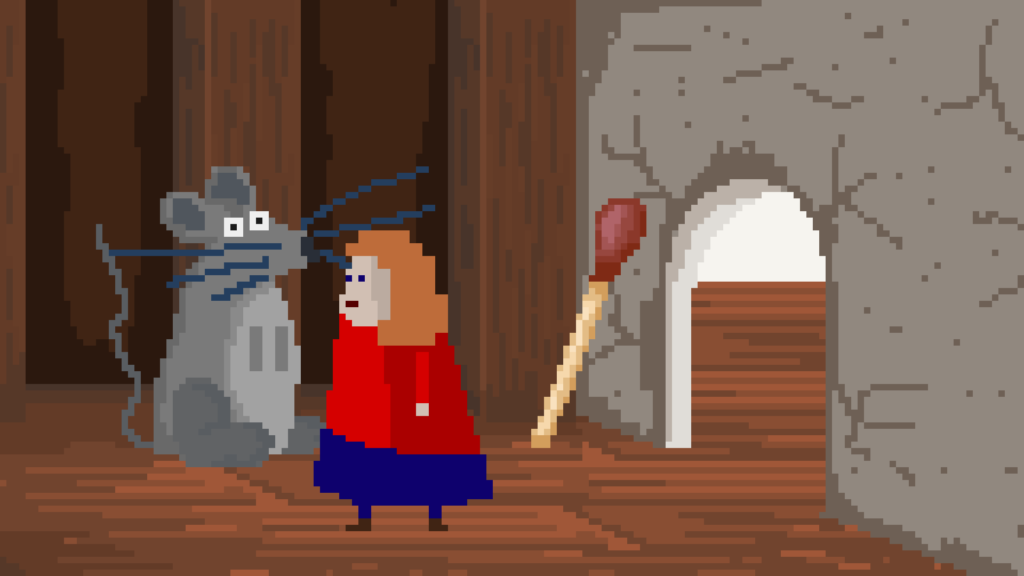 Controlling the game is offered in one of three control schemes: point-and-click, joystick-and-mash, or touch-and-press. Which for a game being released onto the Switch and presumably playable on Steam Deck, are all options you want to have at your disposal. You’ll have direct control of McPixel, and there’s a simplicity to it that makes it so appealing. You can sit anyone down in front of this game, and they’ll be able to play it with minimal effort. Though it won’t be long before they’re chuckling and laughing too hard to actually continue. This is an extremely funny game, one that earns its laughs each and every time you’re introduced to its many gags.

The structure of playing through the levels has changed, and is the main difference here than its predecessor. Now there’s an open-world hub area to explore, and unlock new areas within with currency earned through playing levels. Your progress is in a somewhat linear fashion, but it won’t be long before you have full access to the town of McBurg. Each sequence of levels is known as a round, and levels are essentially scenes where McPixel must do something to save himself from imminent danger or being exploded. While there will be only one way to solve a particular problem, there’s a multitude of incorrect solutions. Whether you get it right or wrong, you’ll be whisked away to the next scene, meaning whatever thing you wanted to try next will have to wait until it comes around again. McPixel 3 (and McPixel before it) can be likened to Warioware through the lens of MacGuyver by way of MacGruber’s absurdity. The types of scenarios you can find yourself in could be simply defusing a bomb, stopping an out-of-control train, or maybe finding the right way off a military airplane. It’s clear that logic is a fallacy, and McPixel 3 requires quick thinking, and often times that has to be out-of-the-box and out-of-the-ordinary. 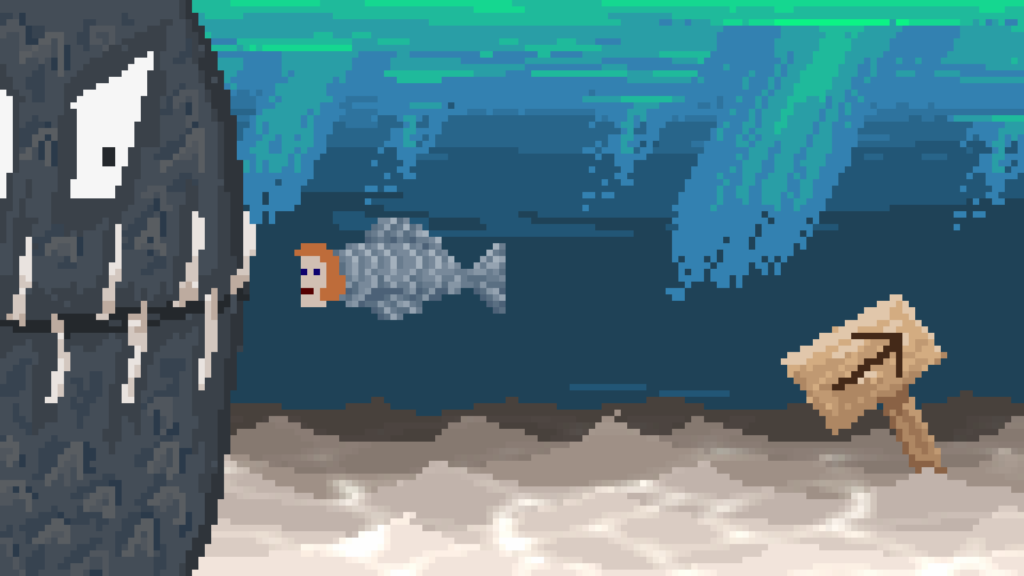 McPixel has no bounds; there’s his reality of saving the day, competing in sporting events, TV shows (complete with a laugh track), action movies, and even retro games. As you work through scenes, you’ll get a percentage of how many of the outcomes you saw. It’s entirely possible you’ll solve a puzzle correctly, but you won’t see everything that scene had to offer. To truly complete any given scene, is to get 100% to achieve the gold for that particular level. There’s a tally at the end that counts how many clicks, how much gold you earned, what percentage each level was completed with, and what your total time was.

You’ll gets coins for correctness to use towards unlocking new sets of levels. These gates are shin-high at best, never keeping you from progressing in any meaningful way. You’ll cycle through all the scenes in a round until you’ve found the solution for them. Thankfully the game will let you fast forward the cutscenes or things you’ve already seen. There’s a lot of incentives to do it faster and better, and replayability is easy to do from the main menu, so long as you’ve ran through it once. I was entertained trying to figure out what I needed to do, and eventually found the right solution. It’s so rare that the trial-and-error was never frustrating, it was all part of the process and ensured a laugh at what was always an unexpected outcome.

You’ll notice that anytime you make McPixel interact with a person, he’ll either kick them in the junk, or pee on them. I don’t know what that is all about, so don’t ask. Though I’ll say that peeing on the bomb is a valid way to avoid exploding, so it’s something I recommend trying. Random clicking has its rewards. For instance, by doing so, you might uncover a hidden Steve in a trash can to start a series of levels. Steve ends up in unwinnable scenarios, but these gags are the point, and finding all of them is a fun adventure all its own. There’s even a whole series of mini-games to partake in from racing to shoot ’em up levels. If it wasn’t obvious before, there’s lots to do and see in McPixel 3, and it’s an absolute whirlwind.

While I never found myself truly stuck during my six or so hours with the game, there is a button that will highlight everything that you can interact with. This will usually get you out of any kind of bind where you’re stumped trying to solve one of the hundred puzzles. There’s a finite set of options in terms of what you can try and do, so no matter what you’ll uncover the solution. McPixel 3 is a game that moves at breakneck speeds, and never wants you to slow down if it can be helped. 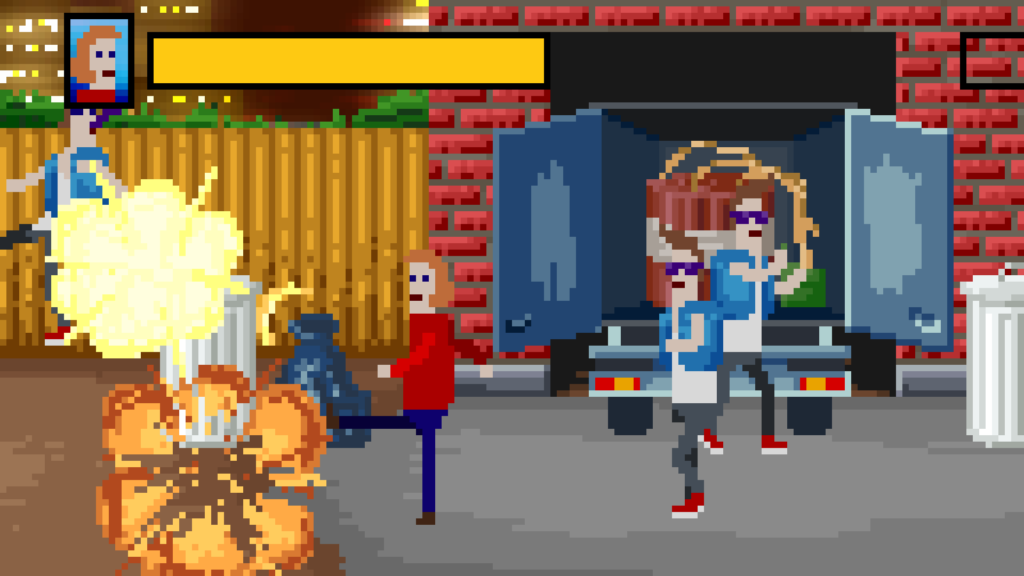 Ten years is far too long to go without a new McPixel game, but it has been so worth the wait to get something so unabashedly silly. It’s a joyous adventure from start to finish, retaining all of its charm along the way. McPixel’s greatest skill is that of self-preservation, and uncovering all the ways is endlessly amusing. McPixel 3 has a true sense of progression from its open-world to the scenarios, it feels more like a proper game this time around. McPixel 3 combines the ineptitude of MacGruber with the last-minute saves of MacGuyver in totality, and does so with great unpredictability.