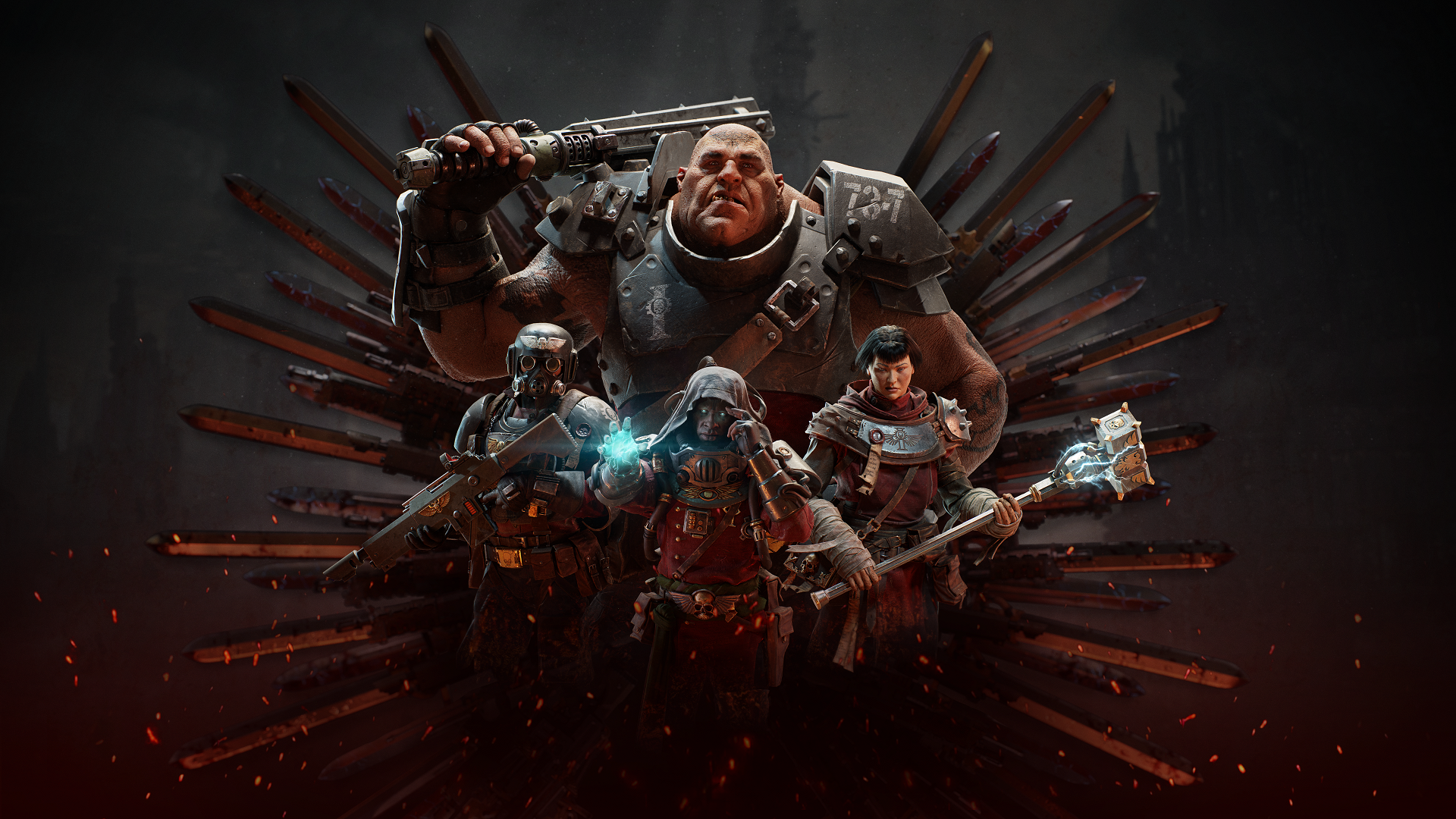 Since 2015, Fatshark has been holding the torch for having the best co-op horde survival game, earning its a “Very Positive” rating on Steam. Warhammer: Vermintide 2 has received so much support over the years, even receiving DLC just a couple of week sago. With Darktide, we’re flung to the grimdark future of Warhammer 40,000 that brings the series closer to Left 4 Dead with the inclusion of guns and melee weapons, but makes it far more evolved. While some things get lost along the way, Warhammer 40,000: Darktide takes the formula of Fatshark’s predecessors into the 41st Millennium for a sturdy base to build on for years to come. 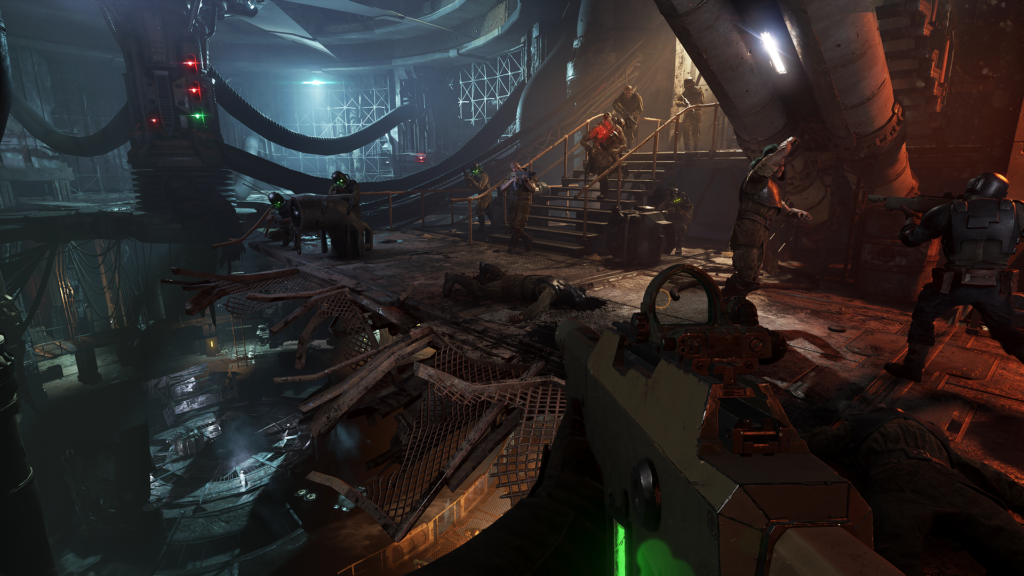 In Darktide, you’re given not only the option of selecting your character class, also customizing each one down to what planet they were born on, and how they grew up. This build’s the characters personality for what and how they say things during combat. While it’s superfluous, it’s very much appreciated, as it means you’ll never see or hear the same character twice. It’s then you learn you’re a prisoner turned Emperor’s last hope as an infection rises on the city of Tertium. You’ll arrive at the hub, a giant goth space cathedral filled with all the technology it can fit. This hub is where not only you’ll see other players, but where you’ll train, level up, and pick your next mission to embark on. It’s an incredibly detailed place where the ceiling is seemingly unending, full of classical and future design.

There are currently thirteen missions in total, and each time you play them, they’ll hardly feel the same. This is in large part due to the fact that as you look at the available missions, there’s a timer on them that rotates them out with different difficulty, modifiers, and objectives. The types of missions you’ll take part in are Strikes, Assassinations, Raids, Disruptions, Repairs, and Investigations; giving something different in gameplay such as defending computers, carrying resources around to restore power, or simply finding the big bad to delete from the system. Oftentimes you’ll find missions have secondary objectives or special parameters like being a Hi-Intensity Engagement Zone, meaning that the enemy population is higher than other levels, and you should expect a stronger resistance of overwhelming forces. If a decision can’t be made, there’s a handy ‘Quickplay’ button that can just get you into the next available game with ease. Darktide wants you to play it, and leaves no barriers in your way in order to make that happen.

While it isn’t required to equip a game with each of the four character classes, it does create balance. As new classes get introduced, the less this will be possible and likely. All classes are variable and can rely on one another, without needing to follow a “meta”. Right now there are just four classes to pick from: The Veteran is a Sharpshooter, and recommended for new players as their starting class. The Psyker is a Psykinetic that is able to pop the heads of the enemies with ease, and disrupt with AOE attacks. The Zealot is a Preacher where close combat doesn’t describe the intimate nature of these attacks. Lastly, the Ogryn, a Skullbreaker is a meat boulder, that is able to tank just about anything, and shoots a shotgun that might as well be a tank shell. All of the classes are fun to use, and offer something for everyone to enjoy whether it’s swinging a big hammer or turning your guns to the side to shoot from the hip.

The inquisition not easy to please, and you’ll repeat missions and locations in order to experience points to level up, unlock guns, and invest in new passive traits. You’ll start of with an active skill you can use, feats are passive traits that can improve your character class as you level up, first unlocking at level five. The current level cap in Darktide is level thirty, which is a tall mountain to climb on its own, though not insurmountable. While it doesn’t feel like a grind, it certainly is, and you’ll be looking to spend at least 20 hours per character to reach their fullest potential. But that climb to the top is one of the smoothest, most enjoyable ones you’ll find in a game like this. 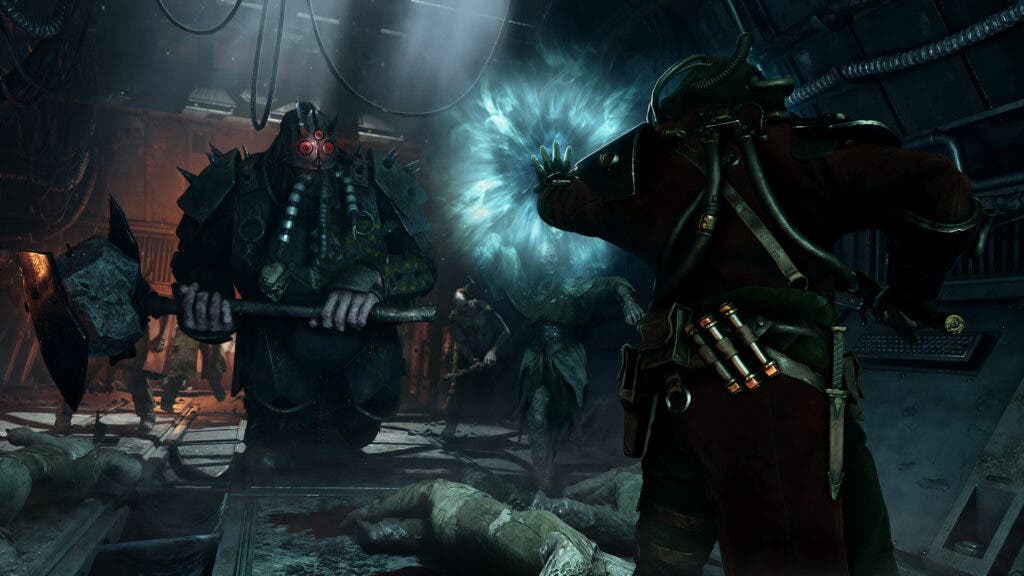 This is space in the year 40K, so it’s clear we’re no longer in medieval times, as such, there’s a new variety of ranged weapons to collect and use. From shotguns to DMRs to SMGs, there’s something for everyone that derives weaponry from the storied Warhammer 40,000 lore. All weapons can have unique properties in the way it fires, or how it can be aimed, and you’ll quickly find your favorite. Melee still is the primary way to attack, and since ammo is a resource you cannot waste. All in all, there’s over 60 weapons and variants to unlock and collect that will be a worthwhile endeavor. Combat requires a lot of crowd control, and there’s nothing better than throwing grenades. They’re rather inessential on the first difficulty tier, and once you start on the third and fourth tier, that’s where it becomes a requirement. I can’t help but laugh at the way the Ogryn class uses grenades, because they’ll throw a whole box of grenades at an enemy due to their large size. In the hub, there’s a whole area to improve your favorite weapons, re-roll properties, and even dismantle them.

While in the thick of combat, you’ll have to monitor your toughness (essentially a shield) and your health. Each class has a different composition of each, so it’s good to understand where you fit in. Classes with high toughness can withstand a lot, and should be frontline types. As with all horde games of this type, it’s best to stick together where the Veteran class can replenish armor while close. This is also useful as ammo crates and health boxes can be picked up to share with the group to stock up and top off. Stamina is another aspect of combat to be aware of, as full sprinting and heavy attacks can wear it out. Regular attacks do not, so you’re able to swing away with impunity at no detriment to you. 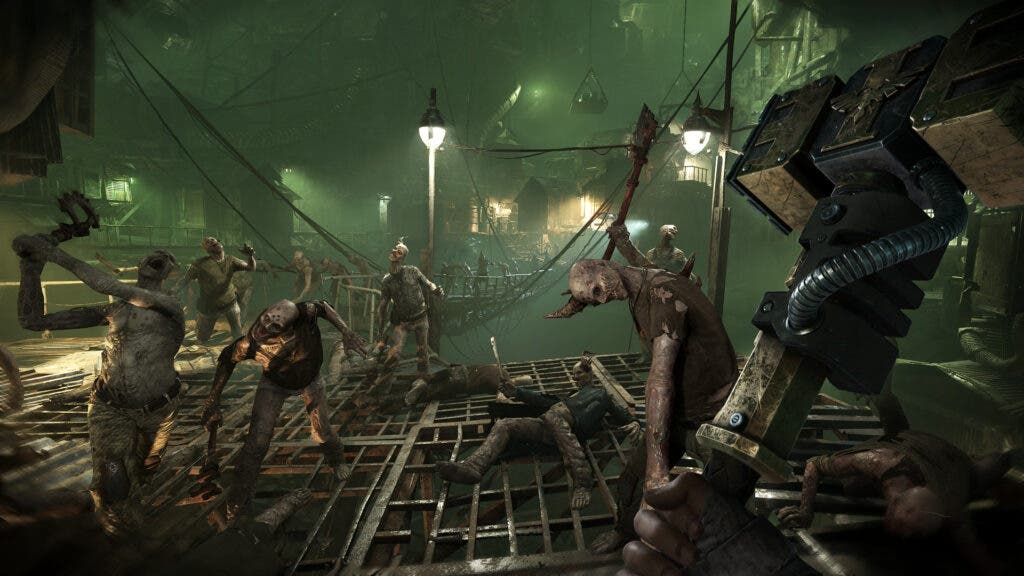 In Vermintide, you fought rat-folk, and in Darktide you’re fighting the pox-infected humanoids, or rather: zombies. These zombies come in varies types from your standard hordes of fodder to specialized types. There’s a trapper, bomber, pox hound, and a scab sniper that will ruin anyone’s day. Should someone on the team be trapped, they’ll have to kill the oppressor, and then you’ll be free. If you get pinned down by the hound, someone has to kill it in order for you to get back on your feet again. If any strike team member happens to completely die after being downed, it’s not the end. You’ll be captured and brought forward into the level to be freed from your captors if your team can get to you without perishing in turn. It’s not a new system for the genre, though it’s certainly a welcome one, offering a way to get teammates back in the action.

Jesper Kyd has scored many of my favorite video game soundtracks, and it doesn’t surprise me how good this is. Jesper didn’t have to go so hard, but I’m so glad he did, it’s just so excellent all-around. The choir and strings mixed with modern beats makes for a stylish blend that works for universe it’s in. It’s also one of those soundtracks that’s both ambient and active, that you want to listen to outside of the game. This soundtrack is just an impeccable, undeniable part of the game.

The performance is not the best, though I was able to tune the game into something that gave me around 100fps at all times. The game ships with NVIDIA DLSS and Ray Tracing, and yes DLSS does a lot of the heavy lifting, I have to say that Ray Tracing hurts performance even on the newest of machines. My PC’s specs don’t quite meet what will allow for smooth framerates with Ray Tracing enabled, so I turned that off to get double the performance. That said, the baked lighting on any given environment is staggering on its own. There’s so much environmental detail here, it looks photorealistic in so many places. I often had to just stop and look around, there was not one area of the game that didn’t look amazing. 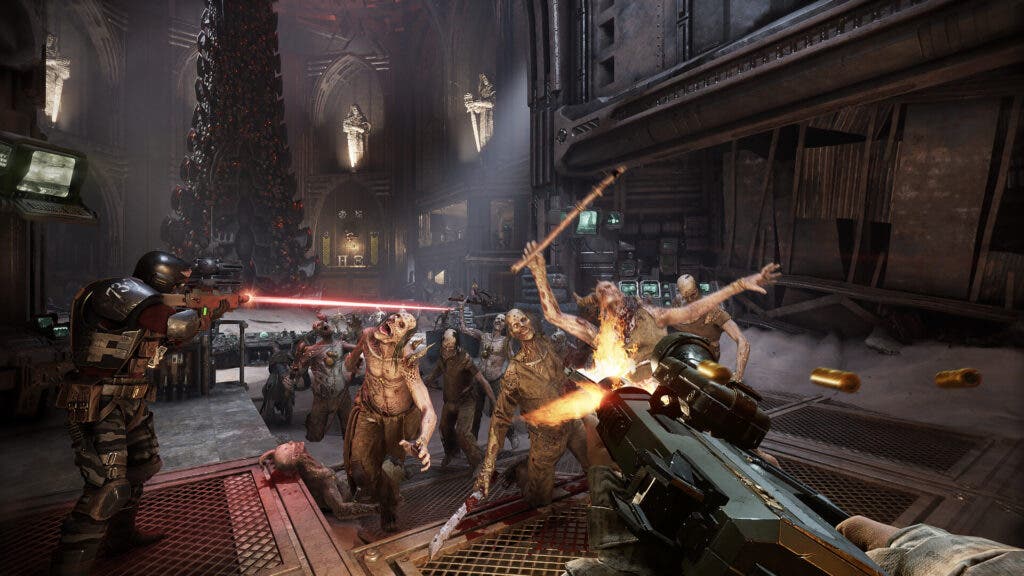 Fatshark has ruled the co-op horde game for years, but I find aspects of the game lacking or not as enjoyable as it should be. Darktide has a strong core to build upon, and so thankfully Fatshark has earned enough goodwill over the years that I trust this’ll only get better over time. Knowing Warhammer is not a requisite to enjoy what’s here, anyone will be able to play this and embrace the chaos. As it stands today, Warhammer 40,000: Darktide has more than enough content in classes, weapons, and mission to enjoy, and it’s clear that the best is yet to come.