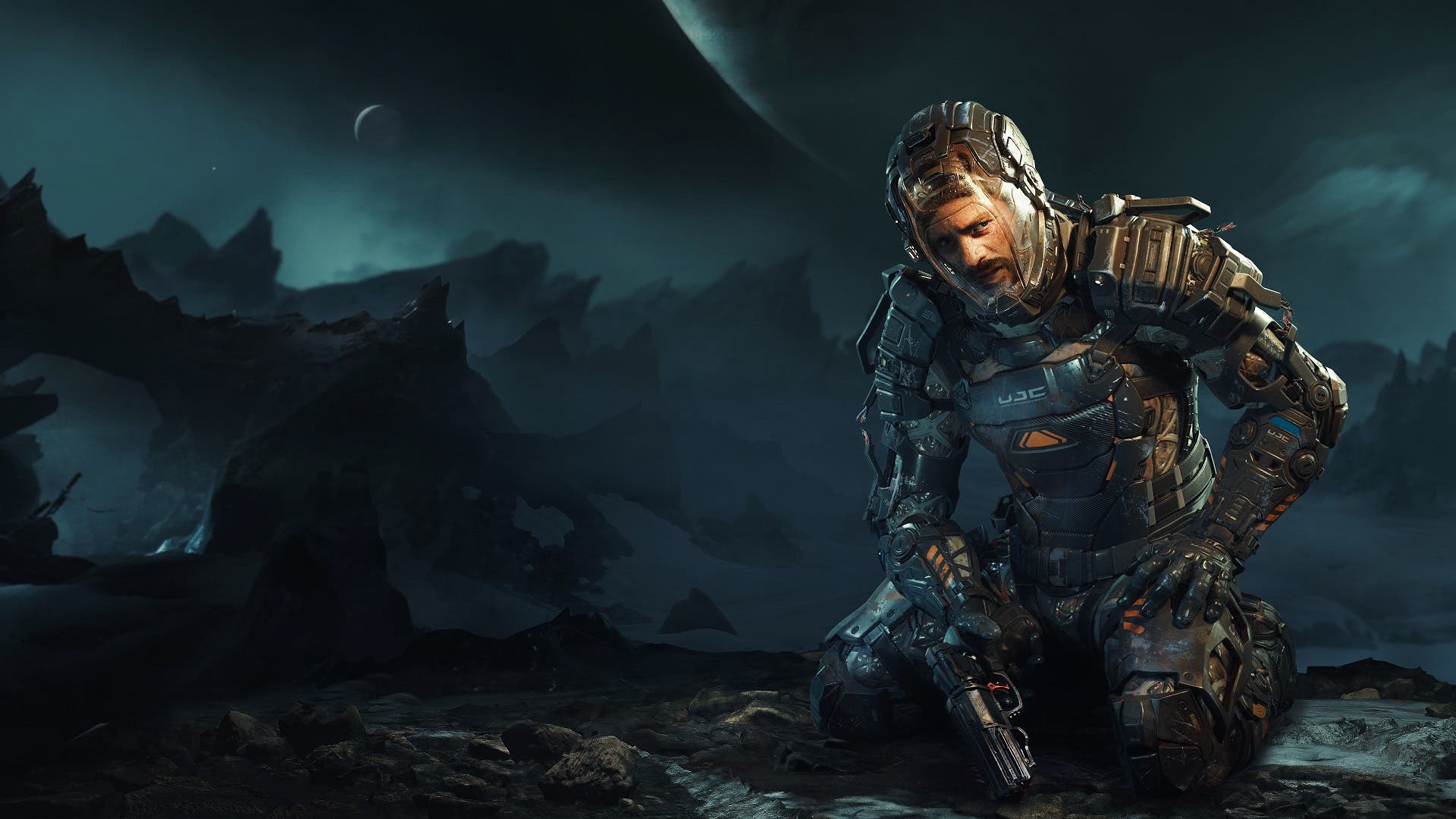 The Callisto Protocol comes from Striking Distance Studios, formed from key people who worked on the Dead Space games. You’d think that given the pedigree of the people involved, and the caliber of those games, that this would be a slam dunk. I wish I could say that it were true, but, it misses the mark on being as impactful as Dead Space was, and only feels like a lesser imitation. That said, the game’s production quality and incredible design are on another level to be lauded. The Callisto Protocol has all the makings of something great, but the focus on melee combat exposes its weaknesses.

From the onset, The Callisto Protocol sets up its mystery that immediately enthralls. Set 300 years in the future, Jupiter’s moon Europa is a victim of something catastrophic. We’re shown that it’s being investigated by Karen Fukuhara from “The Boys”, playing Dani Nakamura during this cold open. Then we’re introduced to Jacob Lee, who is played by Josh Duhamel of “Transformers” fame, and is headed to Callisto for a routine job delivery. Jacob is also a victim, of being in the wrong place at the wrong time when his ship crashes onto Callisto. He’s swiftly found and imprisoned to Black Iron Prison for reasons unknown to us by Captain Ferris of Black Iron Prison, played by Sam Witwer. A space horror game is creepy on its own, but combine that with a prison, and it’s a fantastic setting. While there’s famous actors not only lending their voice, but likeness, they manage to avoid detracting from the experience.

This is a linear game comprised of eight chapters that should take about 10 hours on the normal difficulty, which is the second of three options. From a story perspective, it feels abrupt by the time you’ve reached the end, and definitely leaves some loose ends either for a sequel or story DLC for Season Pass content. Perhaps the most surprising thing about it is that the game does not have a New Game+ option. You won’t have every upgrade in the game, and if you want to revisit it, there’s no way to retain anything you previously worked on. As a result, there’s only a singular desire to play through it, whereas if there was a New Game+, I would’ve jumped right back in. 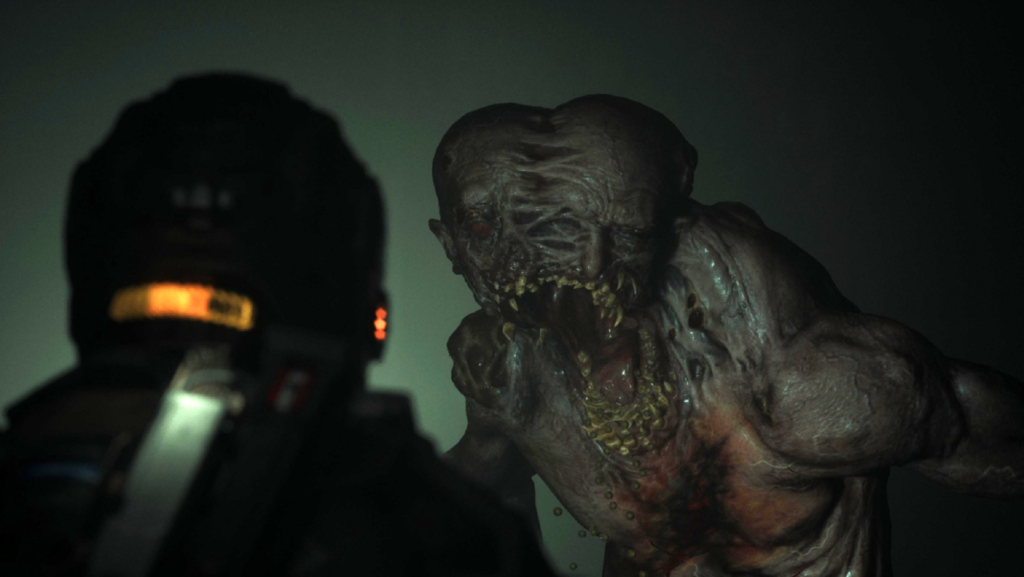 The Callisto Protocol couldn’t manage to frighten me. Sure, there’s an absurd number of jump scares, but every single one of them was ineffective at getting me to jolt or feel at unease. There are times where the game really encourages stealth, and in that is unsettling, though it feels forced rather than something more organic. Jacob’s health is displayed on his neck due to an implant when imprisoned. Comparisons are unavoidable here, but it’s similar to Isaac from Dead Space who had his health displayed on his mining rig, ensuring to remove the need for a user interface. Having the health being located on the neck proves hard to see as Jacob is almost always turning his head during combat or because of some of his idle animation. Even though its readability is inconsistent, this is an immersive as it gets, and it excels at that.

Jacob’s primary way of dealing with the threat plaguing Black Iron Prison is through the use of a stun baton. There’s this intimate The Last of Us style combat that takes the game in a melee-focused direction that I wasn’t expecting, but is a baffling implementation. What eases the frustration of it is how it’s this “artful dodging” system they’ve put in place. When engaged with the enemy, you just need to hold in a direction; either left or right, without needing to time it and you’ll dodge the attack, hold down and you’ll perform a block. You can then counter these attacks by pressing in the opposite direction that you dodged. The melee system is unfortunately not built for multiple enemies, and when you get surrounded you have no awareness situational. You’ll either bump into the environment or get yourself stuck in a corner. When you take away the frustrations of combat, there’s some really great sequences filled with tension. Like when you’re fighting an onslaught of monsters on a horizontal drill platform as machinery hums in the place of music is haunting. There’s a really tight camera that ups the tension, but results in a lot of needless deaths. They’re gory, fantastic kills you don’t see the main character mutilated in glorious fashion. After completing the game, the melee never felt intuitive, just always awkward dances of death. 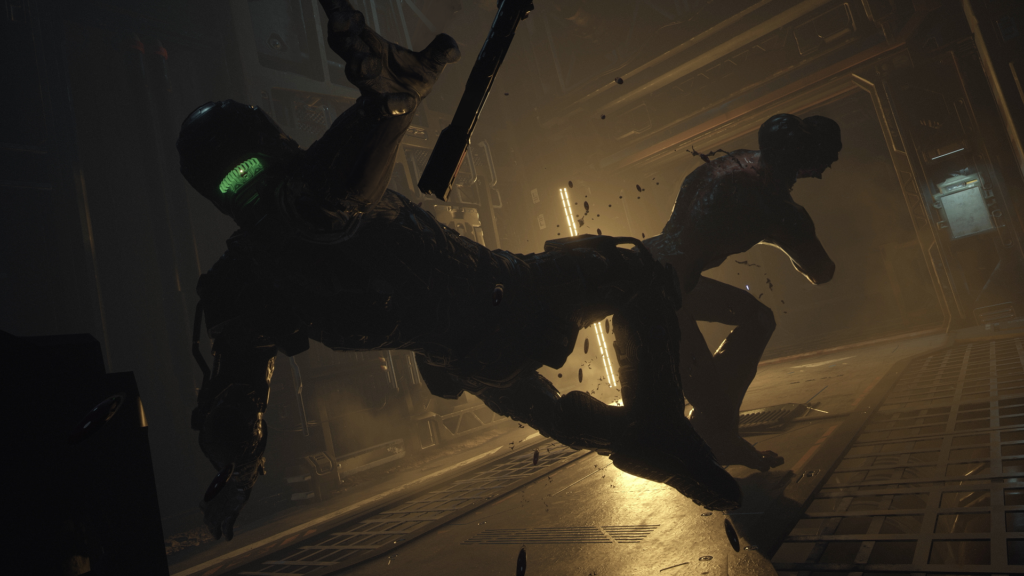 Since guns take a backseat to the melee, the arsenal of projectile weapons you do get are rather limited. You have two types of pistols, a pair of shotguns, and an burst-fire assault rifle. The last weapon you acquire doesn’t unlock until the penultimate chapter. THis in many respects feels a bit too late, though welcome for when the final boss fight happens. Like all good survival horror games, there’s a strong inventory management system. For over half the game, you have to contend with a rather limited inventory, often having to decide to drop that extra health so that you can carry that item that’s worth more credits. Until you leave the level, in most instances you can return to an area that you dropped items to pick them back up or shuttle more gear to be sold for the precious credits.

Callisto credits are the currency found at Black Iron Prison, and as such there are stations strewn about that you can use to upgrade weapons, or enhance your gear. As one would expect, prices become exponentially more expensive with each purchase under the same category. Since it’s not possible to get every upgrade during a single run, you do have to min-max certain weapons or gadgets based on your preferences. While the upgrade systems are pretty straightforward, it’s not without its oddities. For instance, I bought an underbarrel attachment that improves stability, but after it printed, Jacob held the gun as if it wasn’t there. It’s a small complaint on the whole, but it’s things like this that represent a lack of polish. 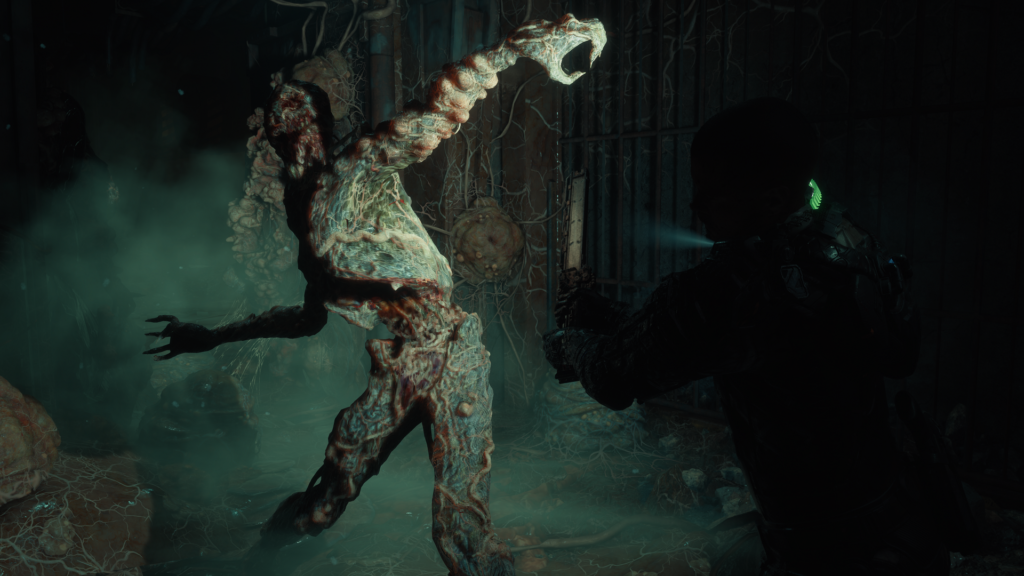 Early on you get access to the GRP (grip) device, a system that works a lot like Dead Space’s telekinesis module. It allows you to pull far away containers to you, or more importantly, monsters that you can hurl at each other or dangerous machinery. It won’t be long before you’re grabbing explosives, throwing them at one enemy, grabbing another to throw at another, and then finishing them with the stun baton. When you start mixing and matching tools, guns, and weapons, it becomes a symphony of attacks that’s really satisfying. It’s less fun when GRP runs out, and you’re relegated to thoughtless dodging and exhaustive melee attacks.

There aren’t any puzzles to be found in The Callisto Protocol, unless you count needing to seek out fuses that will unlock a door or gate. It’s not that big of a deal in the grand scheme of things, but such a core element of games like these. It honestly proves their not needed, but their noticeably absent. There’s also a recurring mini-boss fight that gets tiresome by its third appearance, and by then all the tension has been washed away. I’m amazed at how many times it uses tropes of being separated from your partner, falling off a thing, or making a jump you almost missed; time and time again. Then there’s the overwrought climbing over obstacles, squeezing between walls, and navigating vents. None of them add to the experience, and would have been better off without them, or at least so many. 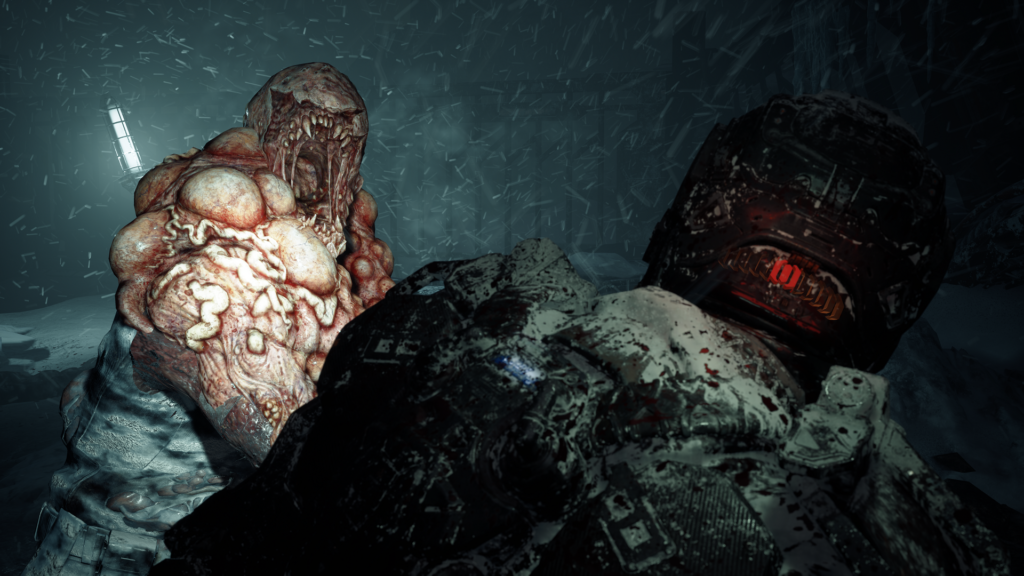 Editor’s Note: This game was reviewed prior to and after the 12/6 Update Patch

This game is utterly gorgeous to look at, just everything has insane detail. Even though this a prison, Striking Distance didn’t allow themselves to have any samey looking environments. You’ll traverse all levels of the prison, and even venture onto the surface of this wintery moon with blinding blizzards. While the photo mode is limited, there’s great environmental details and atmosphere that you want to take all kinds of pictures. This game also has the most realistic looking fog I’ve seen, where shining your flashlight into it makes it even harder to see through it. The Callisto Protocol is rather demanding, I was getting about 45fps in the opening area when I had all of the Ray Tracing turned on even with AMD FSR2 in-use. I then turned off Ray Tracing while keeping FSR on and got around 90fps, sometimes a lot higher. After a couple of patches, the game continues to have some stutter, mainly at the intro logos and during some parts of the game where jump scares occur. This looks like a next-generation game, often reaching into the uncanny valley. 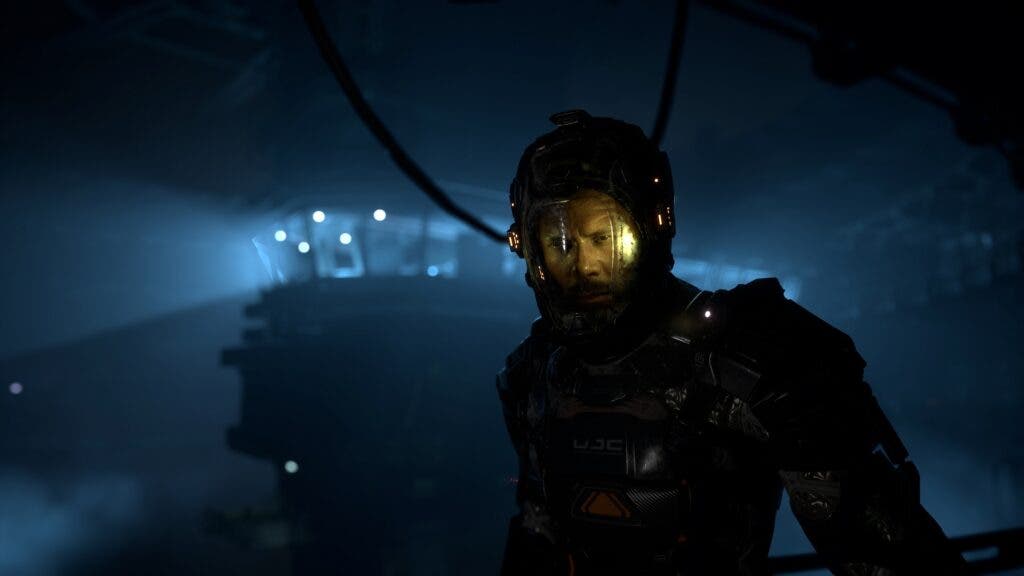 The Callisto Protocol is a ride worth taking, but I’m flummoxed at some of the decisions made here. The melee combat is on autopilot, the weapon selection is limited, and there’s no New Game+ to return for another orbit. The brutal, gory, visceral kills that you perform on monsters is returned in equal measure to you, always bringing a smile and recoil to my face. Compromises had to be made to enjoy parts of this game, but when you can turn your brain off, it’s good fun. The Callisto Protocol doesn’t quite live up to expectations of its spiritual predecessor, but I can’t say I didn’t find it to be mostly satisfying, pustules and all.