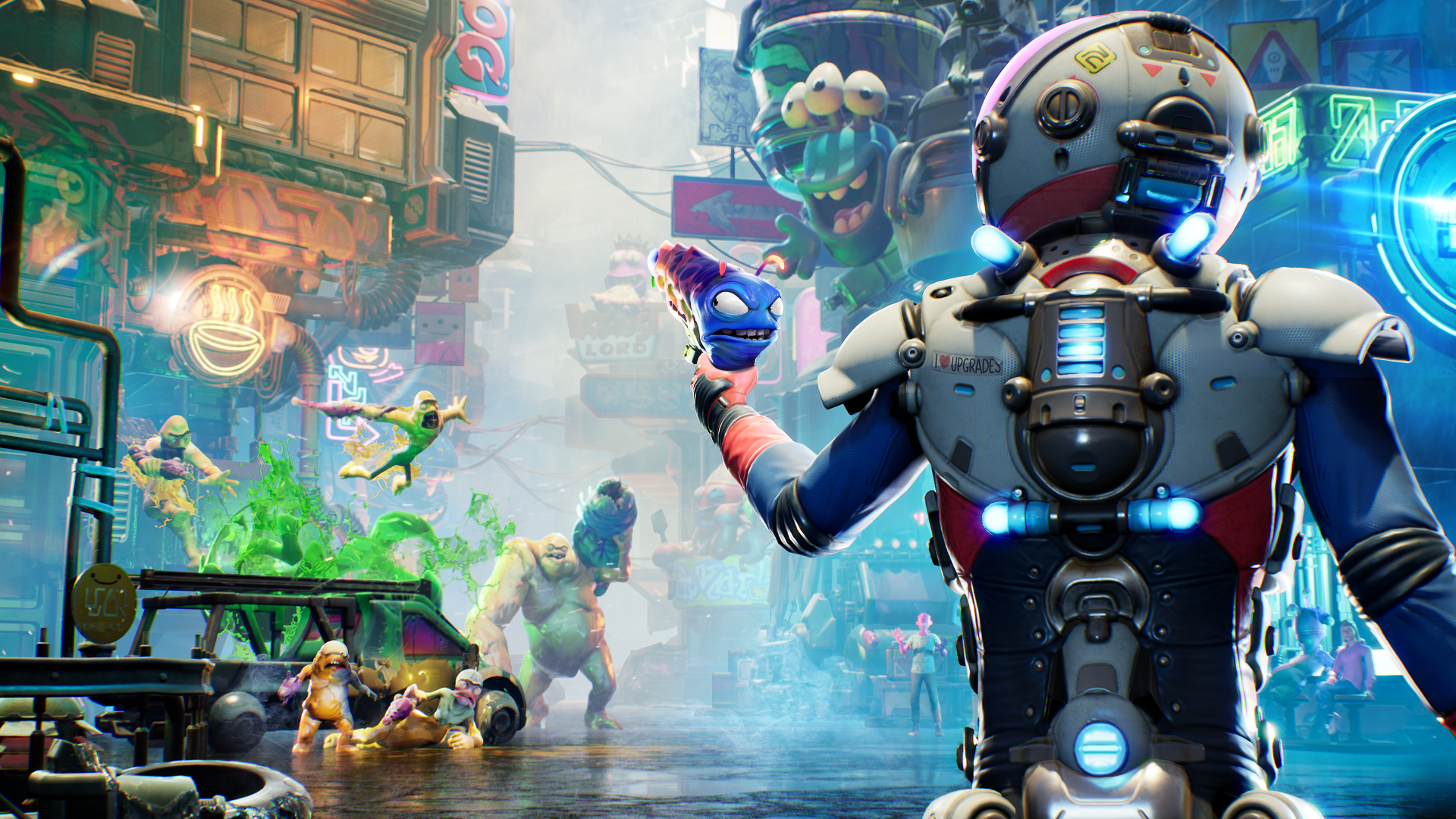 Comedy legend John Cleese has said “Sense of humor is so much more subjective than anyone believes”, and High On Life had me laughing for what has to equate to hours. I’m not caught up on Rick and Morty, but the brand of humor that comes Justin Roiland just results in hearty chortles. This is a game I’ve been looking forward to since it was announced, and it didn’t disappoint from the moment I picked up a talking gun with a face on it. HIgh On Life is a first-person intergalactic comedy with unique shooting, exciting traversal, and ejaculation jokes to be the perfect end-cap for the year. 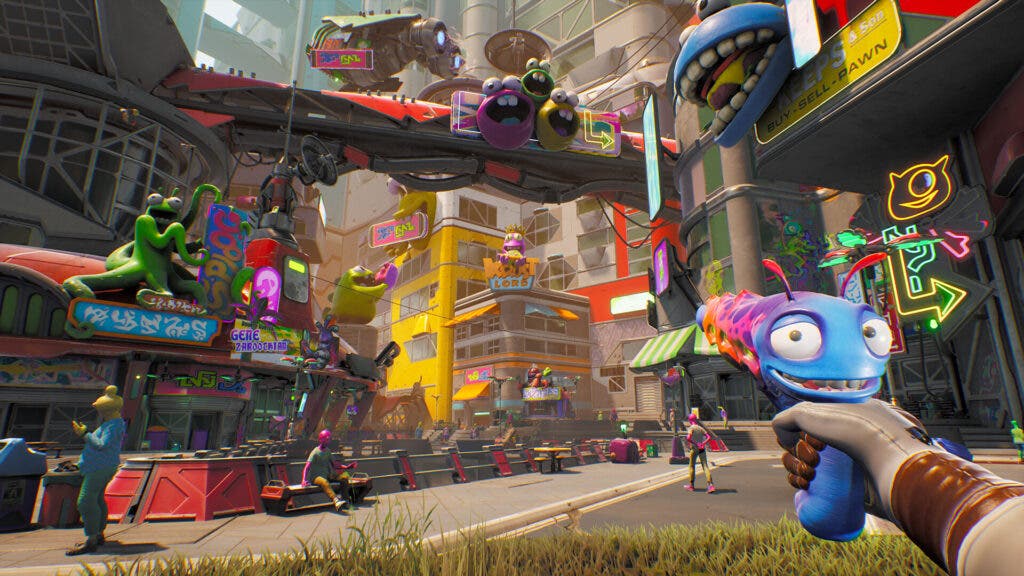 From the opening moments of High On Life, it will be evocative of 90s movies where parents go out of town and the kids are left to their own devices, only for all hell to break loose with an alien invasion. It’s all done with some tongue in cheek once you see an all-out attack and you pick up a gun that has a face, can talk, and its own vulgar thoughts. You’re greeted by Kenny, who quickly fills you in on what’s going for all the necessary motivation and exposition you’d ever need. All the guns and characters around you do the talking, while you stay silent. You see, bad aliens (particularly an otherworldly drug cartel) have discovered Earth, and plan to enslave humanity for the whole purpose of using humans to simply get high. The war on drugs has now gone celestial.

It’s not long before you escape the immediate threat from the sanctity of your own home. You’ll be transported into space to start your new intergalactic adventure, and make something of yourself while saving multiple planets and species. There’s a small handful worlds you’ll be teleporting to, Nova Sanctus, Zephyr Paradise, and others. After a few more character introductions, you’re now a bounty hunter, carrying out the tasks of another in quick succession. There’s seven bounties in total, and when credits roll will clock in at around 10 hours or more. Each bounty is a boss you’ll fight at the end of your journey to them, they all happen in arenas and are balanced properly. As I worked through the cartel bosses, I imagined the fights getting tougher, the mid-way boss was the easiest. What worked in High On Life’s favor, was that it setup this formula of how you thought things would go, but it up-ended that about halfway through, and became much more organic and natural in the way it progressed as it didn’t feel predictable or rote at any time. 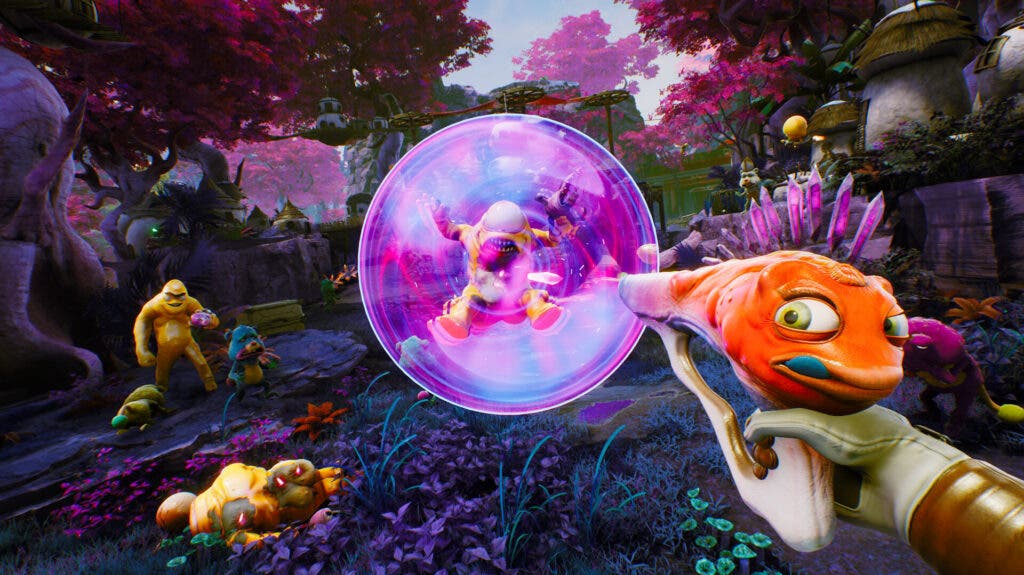 Unique is only the tip of the gun description iceberg, as you’ll have met Kenny the pistol, Knifey the knife, and Gus the shotgun. These are all eccentric characters, weapons, and they have strong personalities. Later on you’ll equip what is essentially a needler and a grenade launcher. These weapons are indispensable, and take the traditional arsenal that would be found ho-hum in any other game, and elevates them by making them living creatures. Depending on which one you have equipped, will speak to the goings on at that given moment. You can even switch weapons during a conversation to get everyone’s take. The voices behind these guns are JB Smoove, Tim Robinson, and even Justin Roiland – these are big comedic talents. These guns have feelings, and you can feel the excitement when you switch to them. They even will say something to the player if they haven’t been used for a while in-game. If either the gun’s or the enemy’s chatter is too much, you can turn that down, and if you want more of that shit, you can turn it up instead.

The shooting feels great, despite them being fleshy, living beings. You can shoot from the hip, or pull them closer for aiming down sights for a precise shot, or sucking them to you. Weapons also have alternate fire modes that expand your options. If you think the shooting might be one-note or dull, it certainly be played in that way. However, I found distinct pleasure in using the alternate fire modes to enact powerful combos. For instance I shot Kenny’s goop bomb that popped a group of enemies into the air, used Sweezy’s time bubble to freeze time, and then Gus’ sawblade to slice through the still enemies. Using the needler to fill up one enemy as he runs to cover with his friends and then detonating it for a triple kill never gets old. The combat is only uninteresting if you don’t bother to experiment what you have at your disposal. Traversal is enhanced early on with what’s essentially a grappling hook, allowing you to swing with easy through the environment. It’s once you get access to the jetpack, though that traversal really opens up and enhances your combat effectiveness. 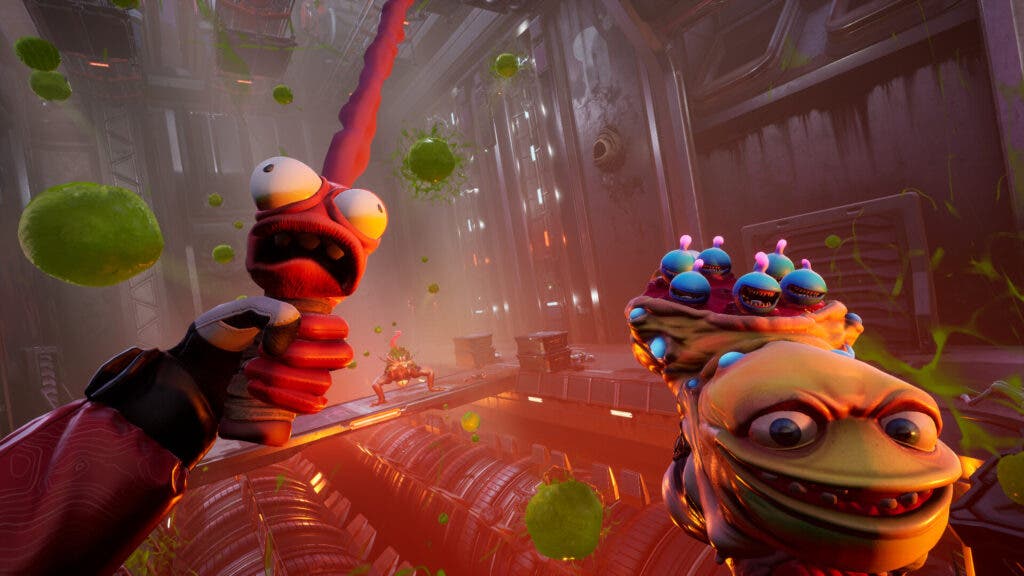 As you go through the game, complete challenges and finish bounties, you’ll earn pesos for your trouble. Pesos can be spent on upgrades to enhance your bounty hunter by expanded your health point pool, increased ammo count, and weapon mods. Weapon mods change the behavior of a weapon, indicated by changing the color of your gun in the process, which is a great visual way of understanding what mod you have equipped. In order to get any of these, you can visit the pawn shop or a shop that happens to be on your way to a bounty.

You do have freedom of choice when it comes to choosing your bounties, as sometimes you’ll have a choice between two to pursue. There’s no intended order or difficulty difference in doing so. Once you’ve returned from collecting a bounty, you can turn it in for some hard-earned pesos. Before you embark on the next bounty, there’s a lot of conversations that ensue between them. There’s times you’re presented with a dialogue choice, that doesn’t seem to amount to anything other than being a different response. The back and forth between your sister Lizzie and the former bounty hunter Gene often results in you having to pick a side. It’s not clear if these result in anything different throughout the course of the game, but it doesn’t seem like it. There’s an alien boyfriend subplot that takes you away from the bounty hunting that’s an absolute riot from start to finish. 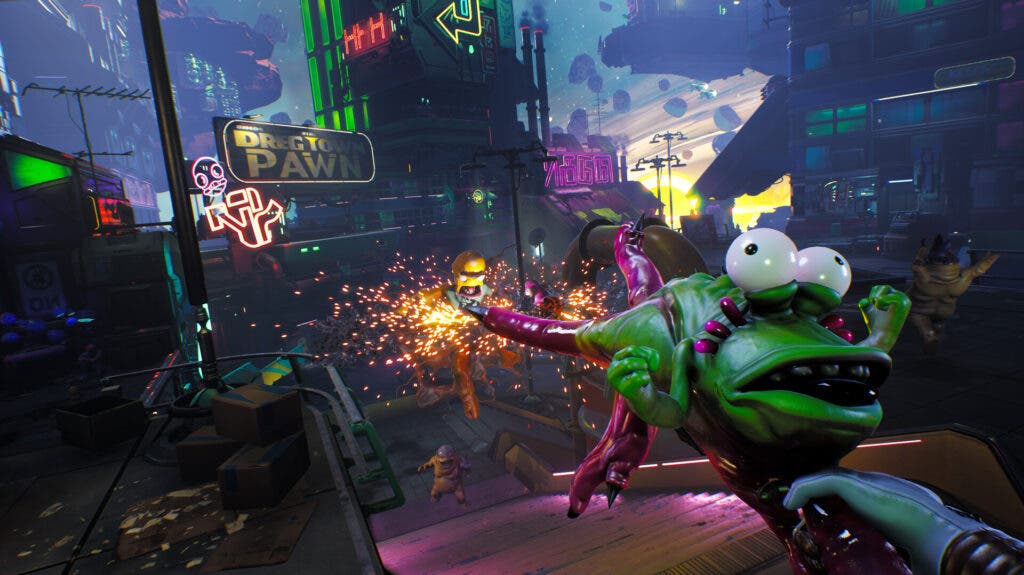 All the gags got big laughs from me: Meeting acid-washed teddy bears that look like reject Sour Patch Kids, having to close ad pop-ups for unregistered software, or unlocking unavoidable embarassingly-named achievements, it’s just so damned funny. I solved pipe puzzles, a funny sequence that took place in a restaurant, and even buying a drum for a guy who talks like a fart sounds – these were just a few of the joys I had while playing. Then there’s the uncomfortableness about answering a guy in a trench coat selling sexual body fluids. There was even a character I met who was in the bathroom, and said it might take an hour, sure enough, an hour later they were done. This is only some of the bits that are in the game, and they’re utterly hilarious, even more so in context.

There’s an insane amount of collectibles, the most of which are the lug boxes, hairy chests that you can only pop open once you get a knife. They vary from being in open areas to tucked away, requiring some clever navigating to reach, and the game helps you out by giving an indicator of their direction on your radar. Later on, you’re given a tool to save humans by teleporting them to a safe haven, which isn’t clear what this does for you. My favorite collectible was the Trash Bag Babies cards, essentially the Garbage Pail Kids but with a legally distinct name. There was one in particular that made me pause the game because of how unexpectedly funny it was.

Playing the game prior to release, I was unfortunately met with a lot of bugs, ranging from big to small. Things like floating characters or portals not taking me to the where I was supposed to go. Sometimes the game just crashed to desktop, thankfully I didn’t lose much progress. I’ve been told that most of these issues will be fixed in a day one patch, so hopefully none of you encounter them. Thankfully its art direction, design, and writing is what distracted me from these moments. The game runs incredibly well, but doesn’t always look the best. It’s an Unreal Engine 4 game, and looks gorgeous, but doesn’t feature Ray Tracing or DLSS, or even any sharpening options. While it’s a beautiful game most of the time, but often it looks muddy or blurry even with motion blur disabled. It’s not the most visually stunning game, but it has it where it counts and has such an awesome look when navigating these alien worlds. 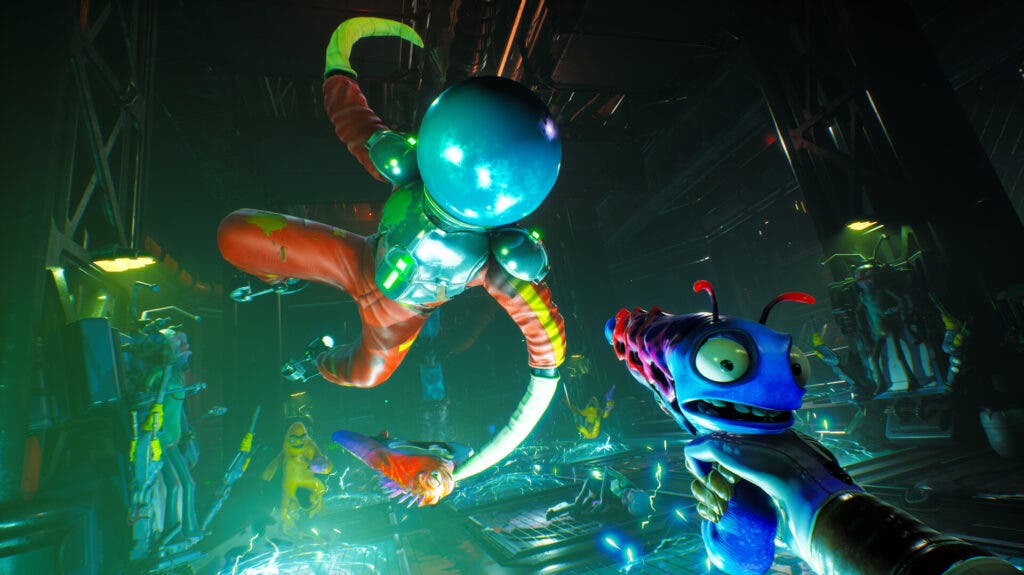 The best way I could describe this game in a concise way that this is Chex Quest meets Halo with the writing of Rick and Morty. Now, if Justin Roiland’s voice and comedy doesn’t normally do anything for you, what you’ll find in High On Life isn’t going to change that. While the number of bugs and crashes weren’t that many or that big of a deal, it did impact my overall enjoyment. I was immersed in the world built here by Squanch Games, completing it in just a few sittings. High On Life is a great adventure with quality shooting and a filthy mouth to be one of the best and funniest games I’ve played all year.