There’s a familiar old saying you’ve probably heard; “You can’t go home again.” Sure, you can always go back to a familiar place and see the familiar sights, but things won’t be quite as you remembered them, and that feeling of everything being just as it was will elude you. It’s an experience familiar to any of us who have lived long enough to venture out into the world and come back to a place where we spent any important formative time at, and it’s one Guybrush Threepwood is having to face in Return to Monkey Island. Not so subtly, there’s a reflection of this in the very proposition of making yet another Monkey Island game in 2022, and that clearly is not lost on Monkey Island creator Ron Gilbert, who along with the other writers is delicately balancing what it means to retread territory they’ve not touched since the glory days of adventure gaming in 1991. 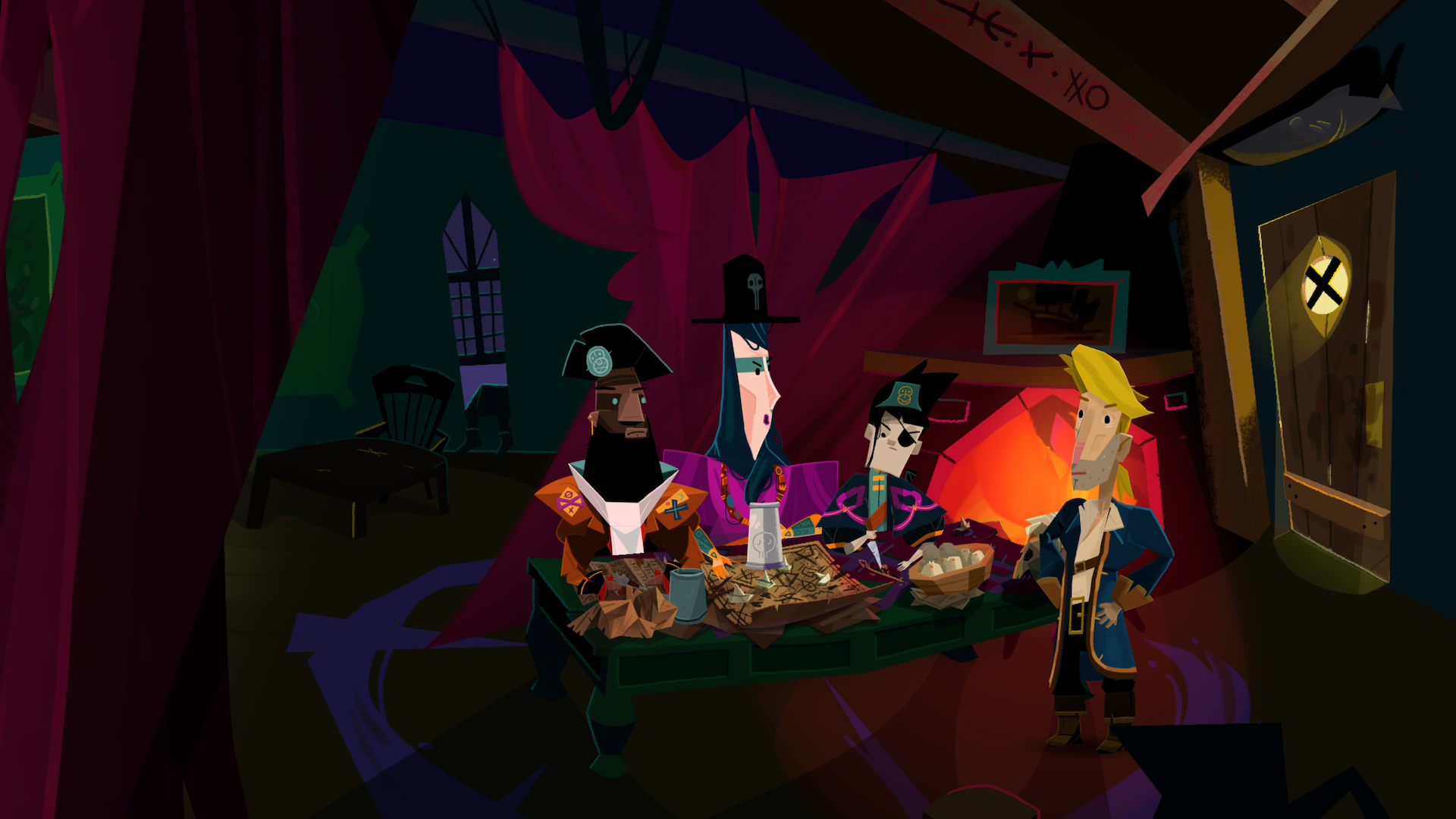 Now, returning to the series for the first time since Monkey Island 2: LeChuck’s Revenge, Gilbert very clearly understands the stakes of coming back to something after being away from it for so long, and it’s evident from the writing that he is keenly aware of the tightrope Return is walking as both a sequel to a long-running, much beloved series, and a potential revival of a series and genre that have not received much attention in a good while. There’s also the issue of everything that developed in the Monkey Island lore during his absence from the games, and prior to release there was a great deal of mystery around what Gilbert would keep and what he’d cast over the bow. Ultimately, it seems Gilbert reveres the fan experience above any qualms he might have had about the creative decisions other stewards of the games made over the years, and Return is as much a reflection of Monkey Island’s journey over the past 30 years since MI2 as it is Guybrush’s experiences during that time.

Coming back to Melée island yet again after a long series of misadventures, Guybrush is looking to actually discover the Secret of Monkey Island (for real this time), but even though much of what he sees is familiar, enough about his favorite old haunt has changed that he finds himself once again at odds with the fickle shores of Melée. For all of the clout he has seemingly built up in assembling crews, going on multiple pirate voyages, vanquishing LeChuck and other nasty figures repeatedly, marrying the former Governor of Melée Island, Elaine Marley, and generally doing all of the sorts of things a pirate would normally do to make a name for themselves, none of that seems to matter to anybody back on Melée who have been carrying on with their own lives in his absence. Many of the best gags in the game’s first act center around the cycle of Guybrush meeting familiar faces, expecting that his (supposed) fame as an accomplished pirate will open doors for him, and quickly learning that he’s burned a number of bridges and that his old friends are either unable or unwilling to help him out. It’s a handy plot device for helping reset the narrative and it allows for Return‘s first act to rhyme with that of Secret‘s in interesting ways, while still feeling fresh and unique on its own, which is important for a game that’s operating in a genre that’s considerably less popular than it was in the 90s.

Return to Monkey Island thankfully takes a smart approach to how it updates core adventure game mechanics for a contemporary audience. Whereas the original games relied on puzzle solutions ranging from “too clever for their own good” to “utterly contrived,” Return is informed by a whole generation’s worth of game design improvements, and its puzzles are mostly fairly reasonable and logical, so that even if you’re playing on the “give me all of the puzzles” mode, you’re not having to do mental gymnastics to figure out the bizarre combination of items needed to move past your current roadblock. Granted, there’s also a big difference between playing these games at the age of 38 rather than at 7 or 8, but this is clearly a different class of puzzle solving that’s still silly, but with some reason applied, and it’s better for it. 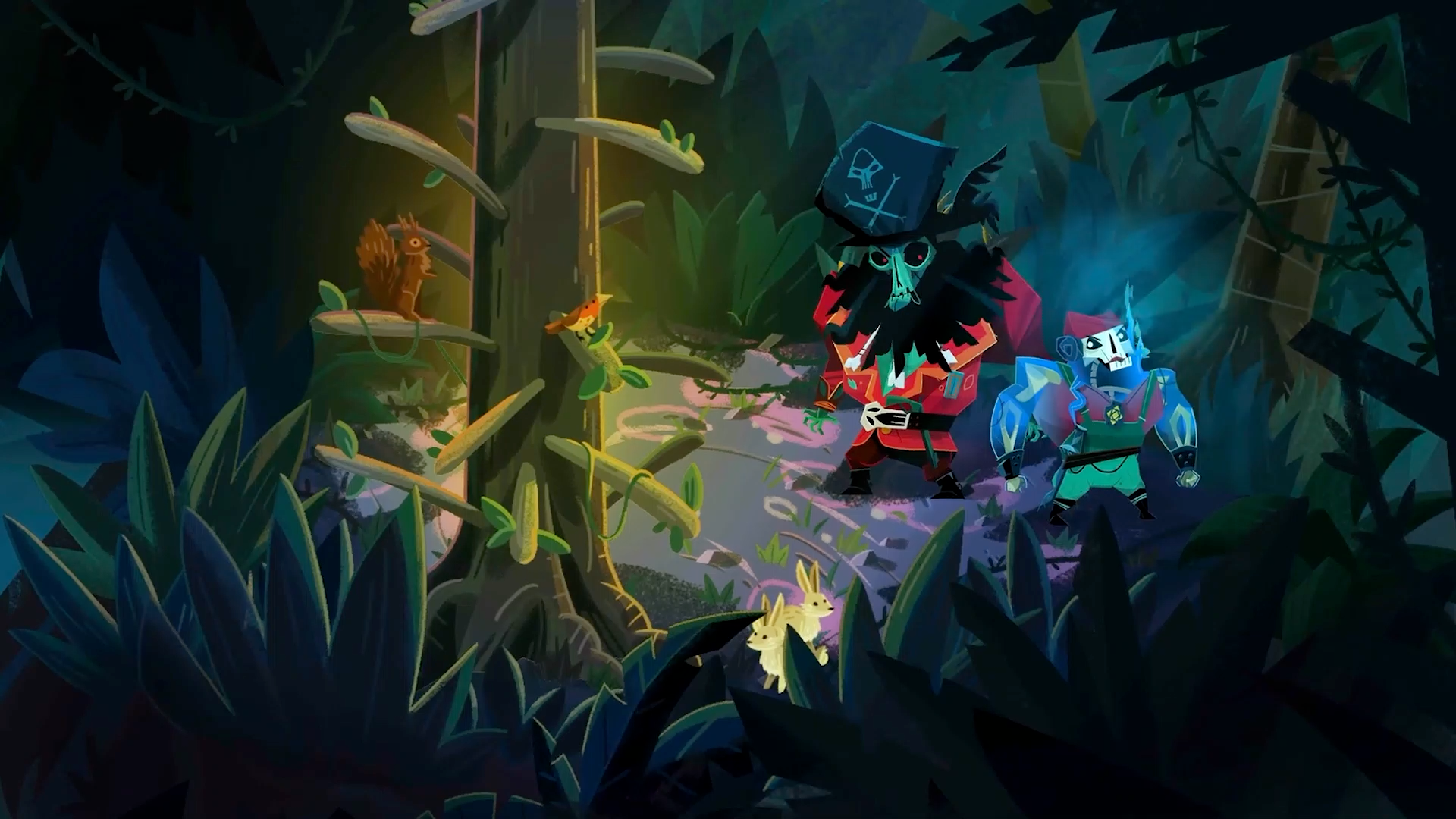 The game’s interactions have been simplified, taking some cues from Curse of Monkey Island‘s verb simplification, but going a step further to center objects, people, and inventory items in the equation and to surface contextual actions around everything so that it’s very obvious in which ways you can use, combine, or otherwise work with anything or anybody in the game to further your goal, which frankly puts the experience of playing Return from a control and usability standpoint leaps and bounds ahead of its predecessors. This is especially noticeable when playing with a controller, where the design constraint of limiting interaction options to just three of the four face buttons helps keep things focused and intentional.

The music is fantastic, as is nearly always the case in Monkey Island games, and the updated takes on familiar compositions are especially delightful to longtime fans. The game’s art style is whimsical and effective, taking on a new direction in animating the characters that (thankfully) diverges pretty heavily from the polygonal incarnations Monkey Island went through and getting back to something more reminiscent of the first two games. Personally I always really loved the animated feature art style from Curse was among the best of the series’ art direction and would love to have seen this revisited at some point, but I think the art style in Return works as a bridge between the Special Edition re-releases of MI1 & MI2 and a necessarily higher fidelity art style that players expect today. It’s certainly evocative of 90s adventure game style, which is largely the point, and I think that hits squarely on with the theme of things being familiar yet different. 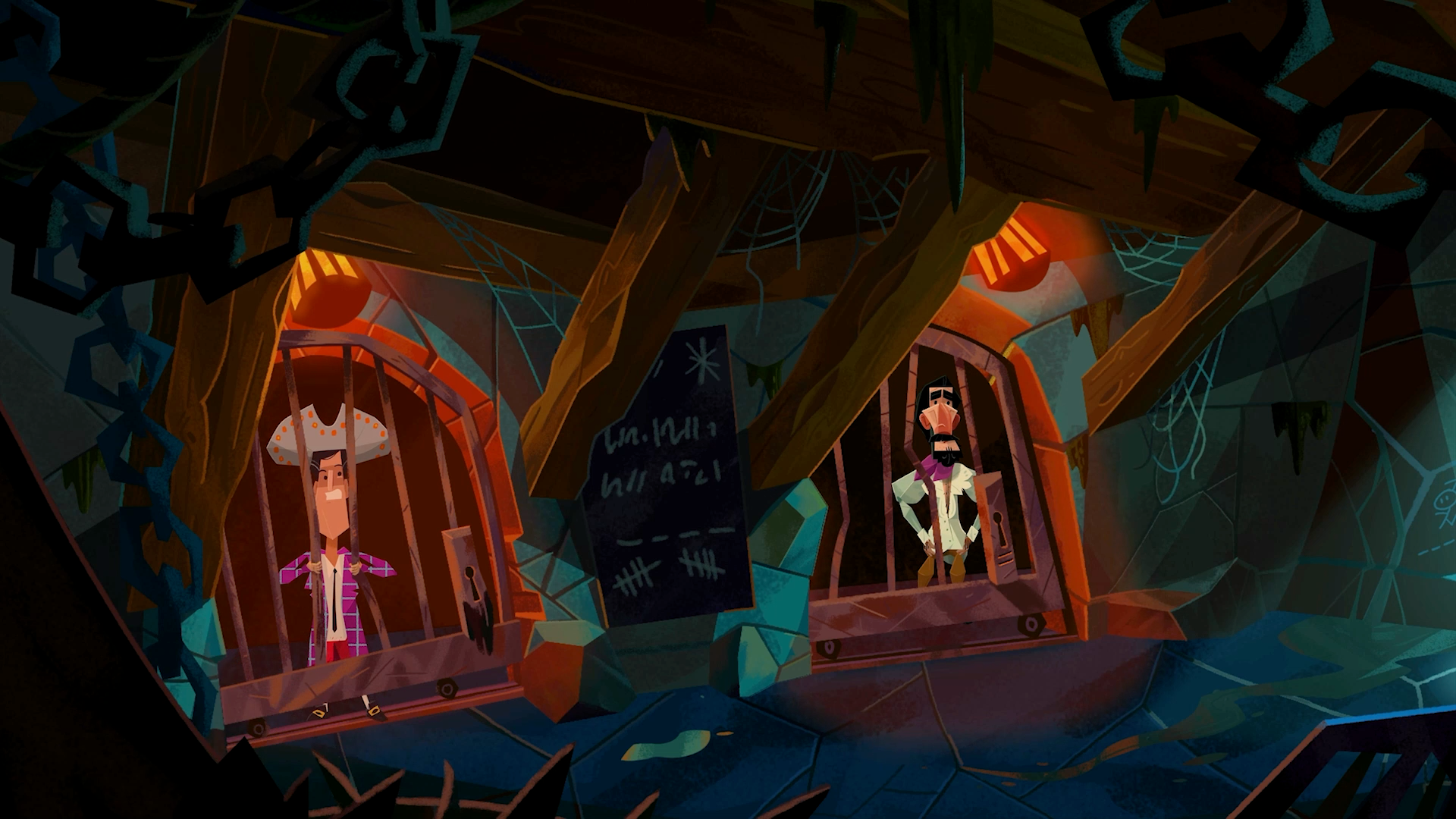 One constant through line that has not changed is the talent of Dominic Armato, who has given Guybrush his voice in every Monkey Island game since Curse (including the Special Edition remasters of 1 & 2), so it’s only fitting that he takes up the mantle once more on Guybrush’s latest adventure. For all intents and purposes, Armato is Guybrush, or at least his voice is, and having him back once again really helps bring the whole experience together. Alexandra Boyd, who has voiced Elaine Marley since Curse, is also returning and is another welcome familiarity, as is Denny Delk’s Murray the Talking Skull, and a handful of others who have been series mainstays since their characters gained voices. It’s a heartwarming and wonderful touch hearing everybody in their roles again, and for me it’s a high point that makes Return feel complete.

The game’s writing is solid, with good jokes and heartfelt reflections throughout. While perhaps not uproariously funny, it has a more refined sense of humor that utilizes subtlety well, and takes advantage of ample opportunities for both callbacks and subversion alike that elevate the game and its story past being a simple retread of familiar ground. That said, I did laugh out loud plenty of times while playing, and while I am a longtime Monkey Island fan who could be influenced by a bias toward enjoyment of the series, I entered into things with a healthy amount of skepticism and found myself pleasantly surprised. 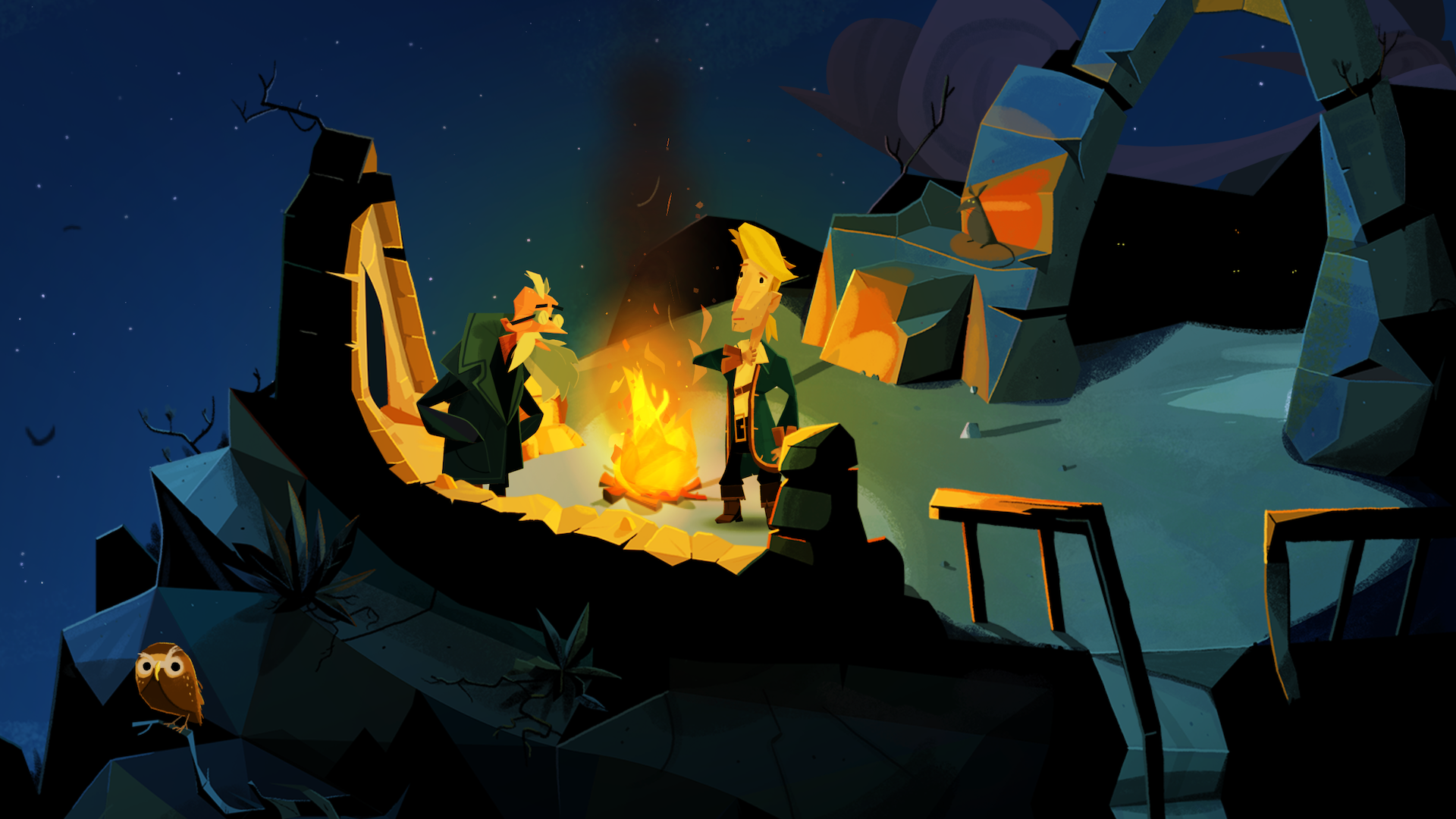 On the whole, I had a really great time with Return to Monkey Island. I think it hits a lot of the right notes fairly consistently, and while it does feel very familiar, there are enough surprises to keep things interesting and rewarding as you stick through the game and see it to completion. What it doesn’t do (and I don’t think it’s trying to), is recapture that feeling of playing the original games for the first time. It’s a great vehicle for getting yourself back into the headspace of those games and immersing yourself in the lore again, but for everything that’s familiar, there is a lot that’s different, for better or worse. And, it’s also still an adventure game, which these days is something you need to be in the mood to play. Having grown up playing them, I’m nearly always up for this, but it’s just a different pace and feel from so much of what else we play nowadays. You can feel Return to Monkey Island trying to find its place in the current landscape, and in many ways I think the game is a success. It’s true what they say, you can’t go home again. Return to Monkey Island knows that, and it’s there to help you embrace that fact.