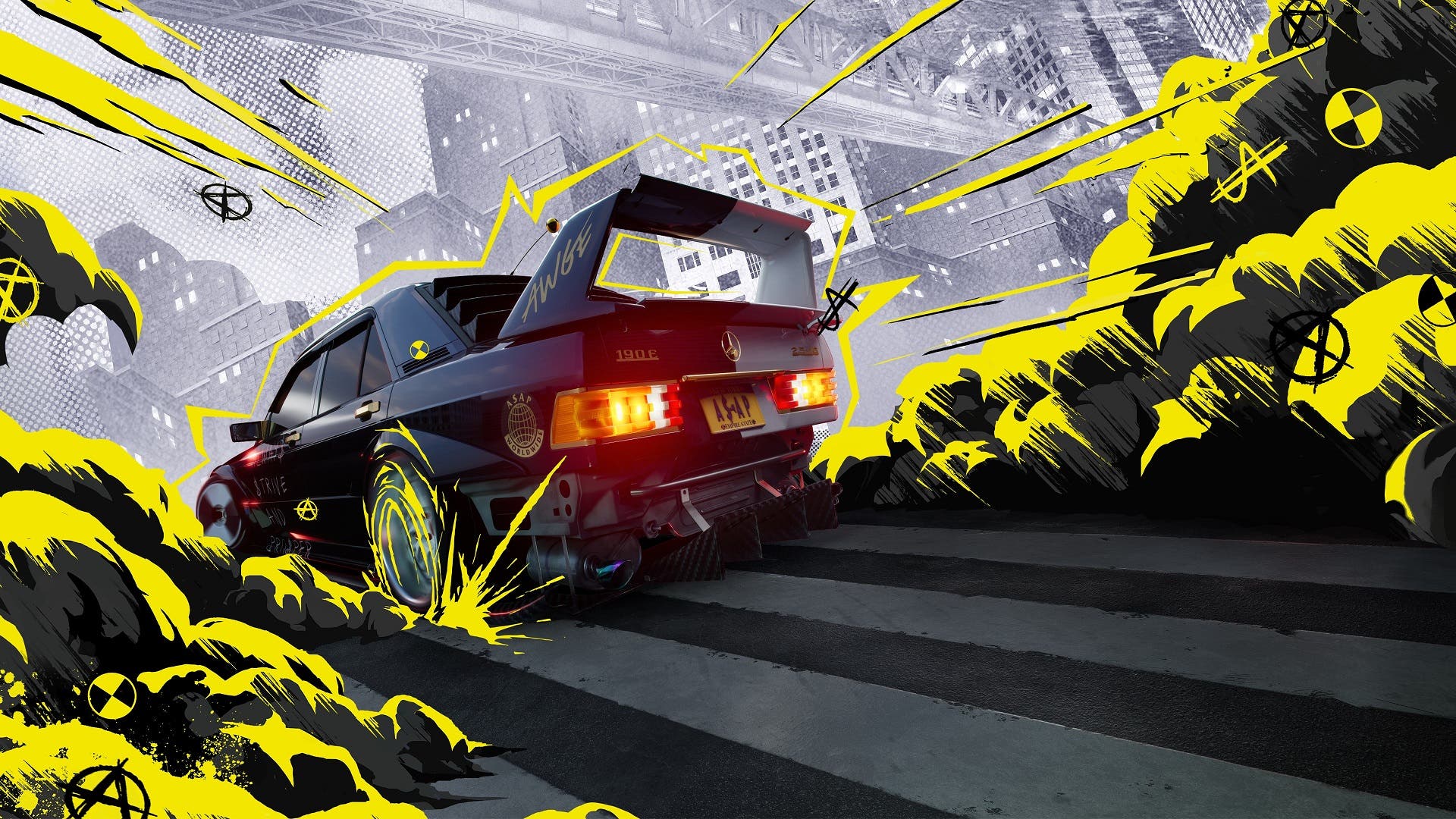 Need for Speed Unbound is a high-octane street racing game offering players the thrill of pushing cars to their limits while outrunning the local PD. With a wide selection of vehicles to choose from and an expansive Chicago-like city to race in, Unbound is a wonderful follow-up to Need for Speed Heat, but it has some flaws.

One of the standout features of Need for Speed Unbound is the attention to the artwork and animations highlighting actions taken in your car. Drift around corners, and you’ll see hand-animated smoke flowing off the rear tires. While airborne, majestic wings will uncurl from the sides of your car, resembling street graffiti. You’ll even see small details like anime-inspired speed lines flowing across your car when drafting your opponents. It’s quite impressive and adds new-hotness to a series that desperately needed it. You’ll eventually have access to multiple pieces of artwork for these stylized flourishes to give them that personal touch. Unfortunately, whatever you choose applies to all the cars in your garage. So if you like the colors of one because they match the livery of a specific vehicle, the same style will be played on all the others. Though you’re free to change the effects anytime, you’ll only have to remember to do so before you leave the garage.

Speaking of customization, Unbound brings over the same customization method that Need for Speed Heat brought us, which was an evolution of the system in Need for Speed Payback, only without the loot boxes. The performance customization gives you multiple tiers of part upgrades that are only accessible after garage upgrades. For example, if you want a gold-tier turbo on your car, you must purchase the gold-tier garage upgrade first. Using this method helps to make the game’s upgrade path stable and consistent, especially when you add in the way races are capped, but more on that later. 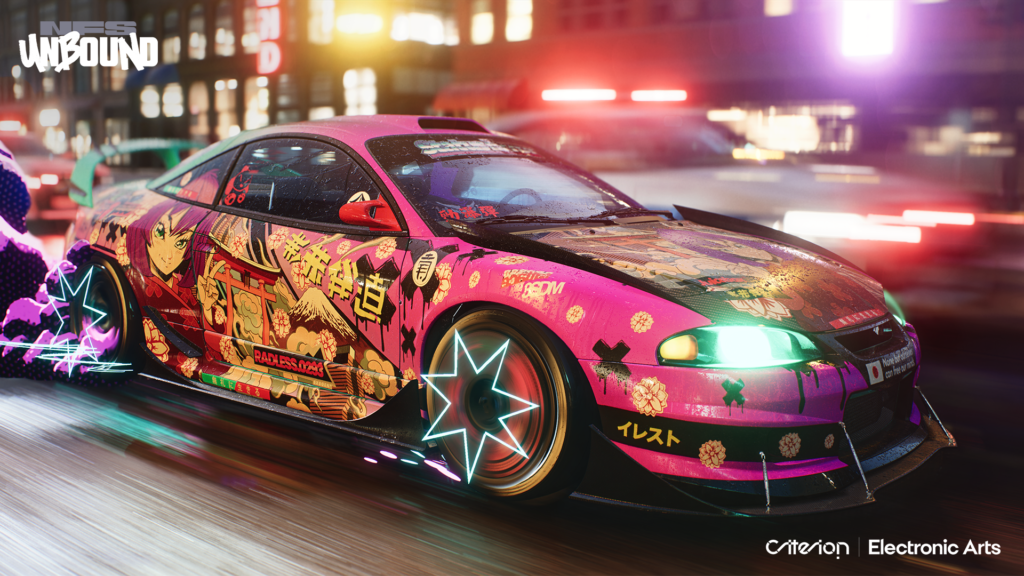 On top of performance modifications, you get the series staple of visual mods. If you’ve played Need For Speed Heat or Payback, you’ll see some very familiar visual mods here. In fact, many of the vehicles and content in Unbound feel ripped straight out of Heat, to the point that this could have been called Need for Speed Heat 2. Not saying that is a bad thing, but it makes you wonder, outside of the new city, what have Criterion and Codemasters worked on when on the surface, most of it seems to have been Ghost Game’s work. I guess I was expecting more of the Criterion polish in Unbound. Where I imagined a whole tune-up, I got an oil change. Needed for sure, but it could have been more.

The races in Need for Speed Unbound are your typical street racing fare, offering a range of environments and race types to partake in. From the bustling city streets of downtown Lakeshore to the more open freeways outside the city, each area has its own unique character and feels larger than it actually is. Races are divided between a few meet-up spots, and you will find all different car class requirements at each as you progress through the story. Some races earn higher payouts but require a larger buy-in price. Or maybe the race will pay more but leave you with a higher amount of Heat at the end. You’re basically gambling with your in-game money and frustrations at this point. Based on that, you’ve got to make the best decision for your playstyle here. 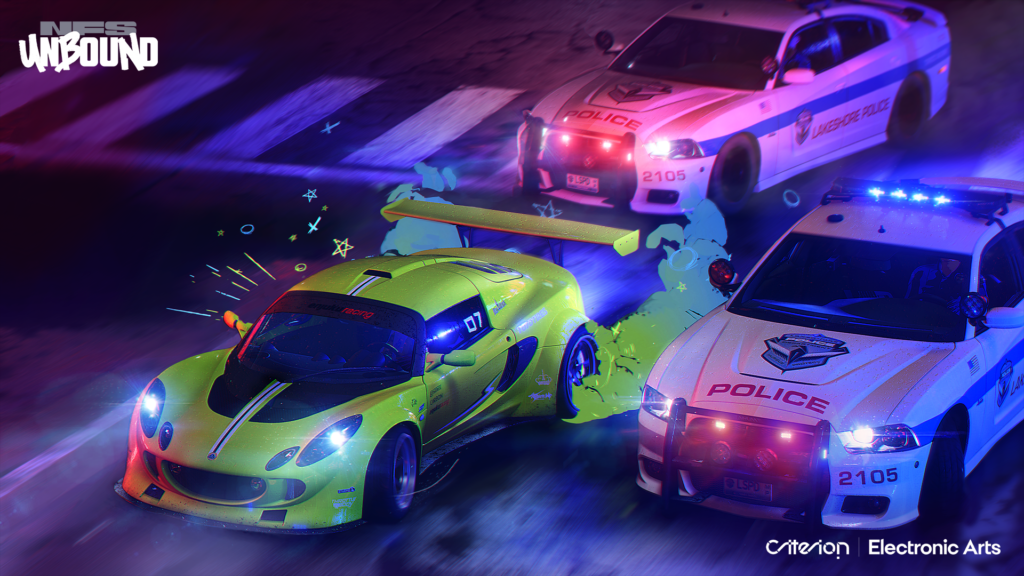 What do I mean by that? Let’s take the second of the two examples I gave, competing in a race that will pay a lot but add more Heat to the heat meter. Obviously, doing well will net you that cash. But increasing that heat bar is like adding stars to your wanted level in previous Need for Speed games or even something akin to Grand Theft Auto. The more Heat you have, the harder it will be to evade the oncoming police force. They will start with single cruisers, make their way to pursuit Corvettes and Raptors until you fill out the heat meter, and have helicopters constantly looking for you. Depending on how you play, these cop chases can become quite a burden and stressful. There were a few white-knuckle experiences where I did whatever I could to lose the unmarked cruisers in the wooded areas while trying to hide from the helicopter’s vision circle. Compared to NFS Heat, though, I found the police pursuits and evasion of the cop vision cones slightly more manageable and forgiving. This made me enjoy driving around the city with high heat more often. Your experience may differ, though.

If you want to get rid of the heat, you have to end your day. To end the day, you have to finish both the daytime and nighttime segments of that day. Ripped straight from Need for Speed Heat, each day is divided into two sections. Any heat you earn during the day will carry over into the night, but any cash you make during the day gets deposited into your garage. In a very souls-like mechanic, you risk losing all the cash you acquired during that segment if you get caught, so once you feel comfortable cashing in that money, you’ll want to head to the garage. Doing so, though, will end that segment of the day. The other wrench that gets thrown into the mix is that by the end of the week, you will have to have a car that can compete in the special competition. For example, you start with a B-class vehicle, and by the end of the first in-game week, they expect you to have an A-class vehicle. This helps keep the progression path pretty straightforward and does not open up the option of dominating all the early races with the fastest cars in the game. 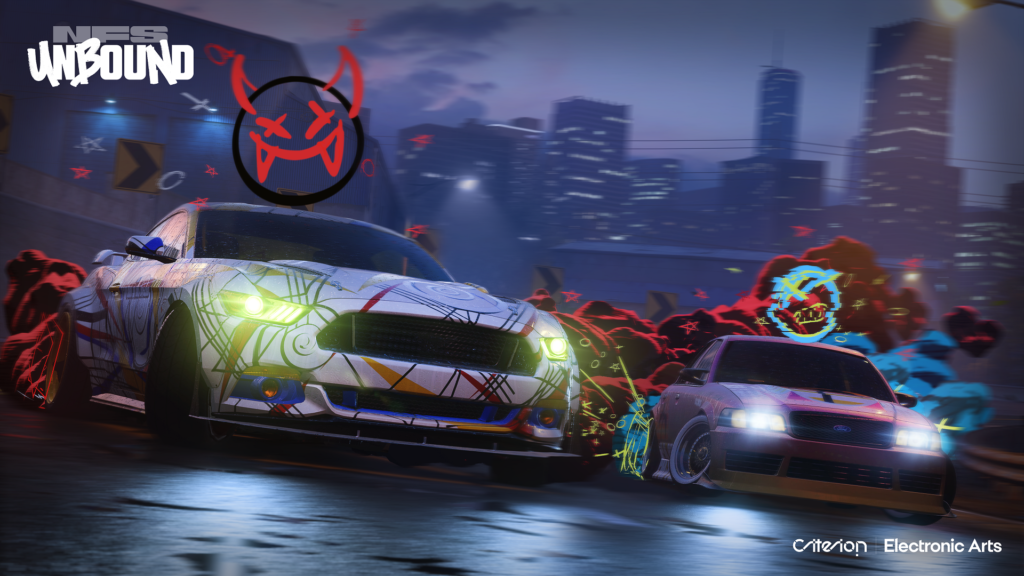 The graphics are gorgeous, but that is to be expected with it iterating off the already impressive Need for Speed Heat. The downtown area of Lakeshore feels very Chicago-esque, with things like the elevated railway running through the city. I enjoyed driving around the city more during the day, mainly just to get a glimpse of everything. Especially seeing some of the collectible graffiti art peppered throughout the city. As I mentioned earlier, on the surface, one has to wonder what Criterion and Codemasters brought to Unbound over Ghost Game’s Heat. The biggest culprit in feeling this way is the controls. With both Criterion and Codemasters hopping in on this title, I would have expected the cars to drive better. Unfortunately, everything feels almost 1-to-1, a copy of Heat and Payback. Which, again, isn’t bad, as those games drove reasonably well; not great, but serviceable and fun. With the pedigree of Criterion and even Codemasters, I was hoping for more adjustments to how the cars felt.

Since the 2015 “reboot,” the series has been significantly drift-focused. In what the games have referred to as “grip,” that grip style has never really felt very good. These latest games have always felt like they want you driving in a specific style but offer the other style as an appeasement. Hitting the braking points and taking the apex around the city streets doesn’t feel right. No matter how I would tackle them in this game, or the recent previous titles, The AI who were drifting were always faster coming out of the turns. So to keep up, I was forced to follow suit and tune my car to slide around all the turns. After that, I felt competitive. In the next NFS installment, I hope they either lean heavily on the arcade & drift-like experience from Criterion’s Hot Pursuit reboot or give us a more GRID-like grip experience. It doesn’t fit anywhere else, but I also wanted to ask why in 2022, not all open-world racing games use a GPS racing line viewed on street level. It doesn’t have to be as intuitive and well thought out as Forza Horizon, but at least give me a shallow line or something to show which direction I need to go in. Cones and chevrons can only do so much, and with as much flair being displayed while driving, It would be helpful to have something to bring my eyes back to the in-and-out points of my next turn. 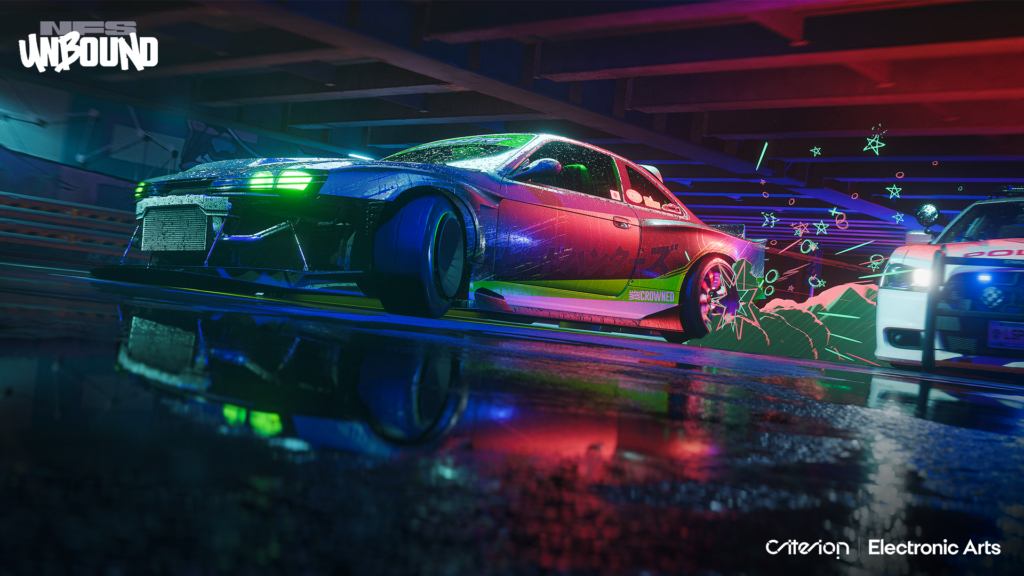 Now to bring up the worst aspect of this game, its story and its characters. Right off the bat, this is nowhere near as bad as Payback or the FMV of 2015’s Need for Speed, but it’s cringey all the same. From character dialogue to the presentation of lines, everything falls apart here. Individually, the lines are delivered well, and the voice actors are doing a great job; well, except for the lead character. The male voice feels like they’re phoning it in; it’s very pseudo-monotone in most of the delivery. What is probably the worst offender, though, is how the conversations are stitched together. Either there is an unnatural gap between sentences, or you’ll have actors sound like they’re talking over one another unintentionally. Even worse, many of the sentences feel like they are the start of a new sentence in a new paragraph. A natural conversational flow is not maintained. Top that with the fact that the written dialogue is atrocious, especially early on, and it’s a story that doesn’t throw its best foot forward. It honestly feels like it was written in a board room with a bunch of folks in stiff suits thinking, “yeah, this is how people on the streets would talk and relate to one another.” I, myself, am no expert either, but the feeling I get listening to it feels icky. Ignore the story if you can, and focus on enjoying the racing. Thankfully the overall story is your generic rags-to-riches street racer plot, so it’s simple enough to bypass as you already know how it’ll play out.

As for multiplayer, I haven’t had the opportunity to try it, but it’s sectioned off into its own category, whereas in NFS Heat, I believe it was an open-world, drop-in, drop-out style. In this multiplayer mode, they offer PvP races. That’s fine, but I’d rather tackle races as a PvE experience and co-op them with my friends. But on the bright side, it is cross-play, so you can race with friends on any of the platforms the game is released on. 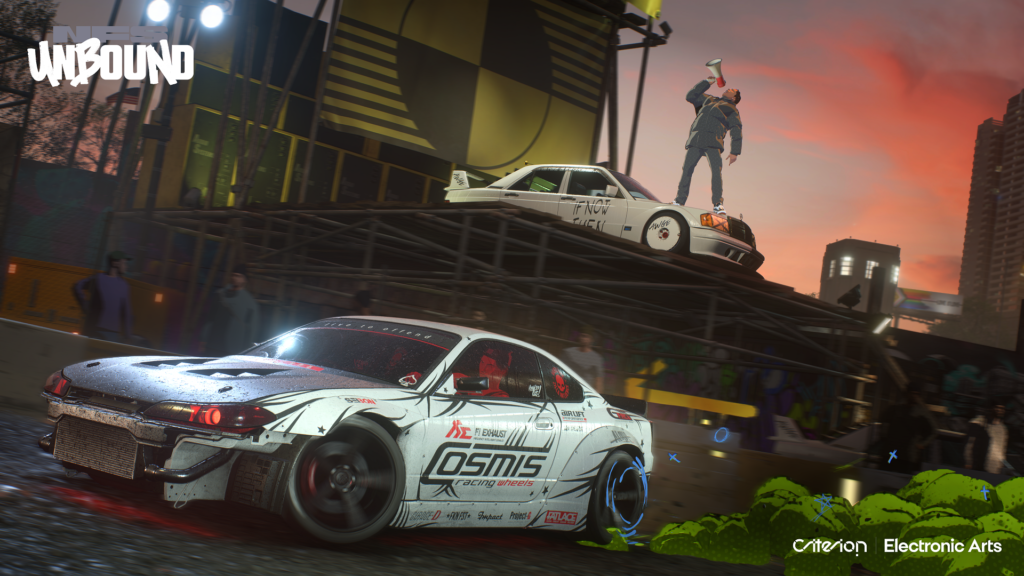 Overall, Need for Speed Unbound is a fantastic racing game that is hindered by a few flaws and terrible dialogue. Even with that, it’s still a bang-up good game, one with a lot of fun! With Unbound, some have been proclaiming that Need for Speed is back when in reality, Need for Speed has always been this good. As a lifelong fan, I should know! I recommend you try NFS Unbound if just for the art alone. But is this latest Need for Speed a must-play? Maybe not at the full $70 pricetag. I would wait for a sale or play it through EA Play. In fact, if the graffiti art flourishes aren’t doing it for you, go pick up NFS Heat; that’s basically the same game and is just as fun.