Cuddle Monster Games is back with another action roguelike bullet hell shooter, but instead of it being a platformer, it’s arena-style combat from the top-down perspective. LONE RUIN stands out visually, as the developers chose voxels over sprites, and has a striking and vivid art style that really compliments it all. Leaderboards play a vital role in its replayability, creating incentive to start another run to do better and achieve that top spot. Cuddle Monster Games makes highly replayable games with simple concepts, but LONE RUIN just needed a little bit more to keep me for the long term. 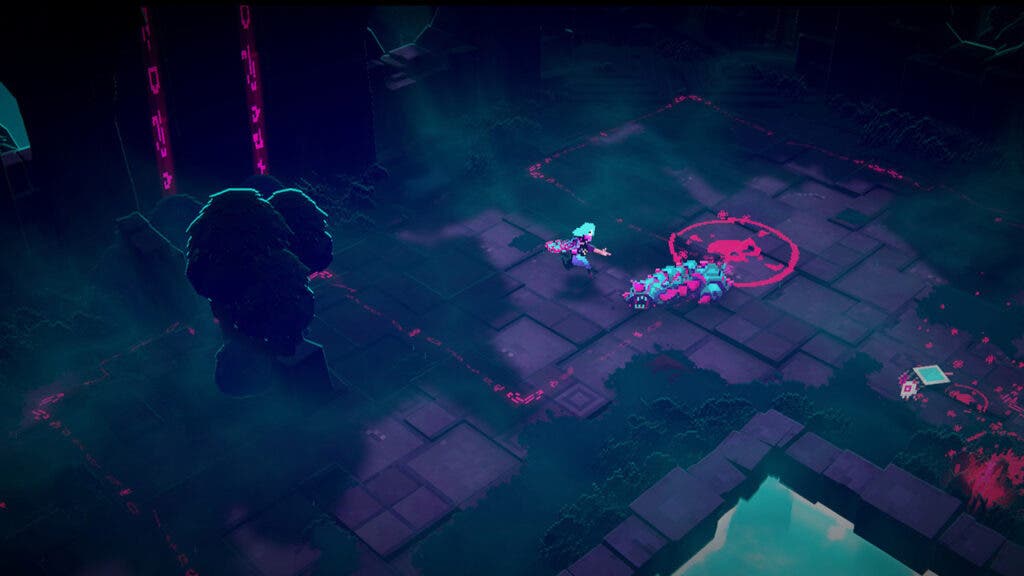 The hook to this isometric bullet hell arena shooter is that everything is spell-based, offering something different for the genre. At the start of each run, you choose one of eight: Shard that has a high rate of fire, or the Scythe for slicing and dicing, a charged up Rail with a cooldown, a Fireball that explodes on impact, or Pulse with a burst of fire. Each spell has its own pros and cons, with much of the enjoyment coming down to personal preference, though there’s a lot to like and to choose from. I think Fireball, Scythe, and Shard are spells that really feel good to use, where as Rail, Chain Lightning, and Barrage don’t. Thankfully you can test out each spell before starting a run, without the frustration of having to deal with a weapon you don’t actually like. All the spells have a limited use, and some form of cooldown to keep you from firing them constantly. The variety in this is rather impressive, and helps sell the guise of spell casting. On new runs, there will be some spells that get a free upgrade from moment one, which can be an invitation to experiment with a spell you don’t normally use. My favorite thing about all of this, is that the character regardless of spell chosen holds out their arm with a finger gun for casting spells.

Combat is really kinetic and engaging, forcing you to stay on the move and be on the offensive. You’ve got a dash ability to create space between you an enemy to avoid an incoming attack or simply navigate faster around the arena. Though dashing has its downsides, because you can dash your way off the level or into a chasm. Thankfully it’s not an instant death, and you just take some minor damage. On higher difficulties though, this could spell certain disaster. Being careful and cautious of your surroundings is one of the earliest teaching moments that LONE RUIN has. It’s really fun zipping around the level, and as you progress, becoming more powerful and devastating. 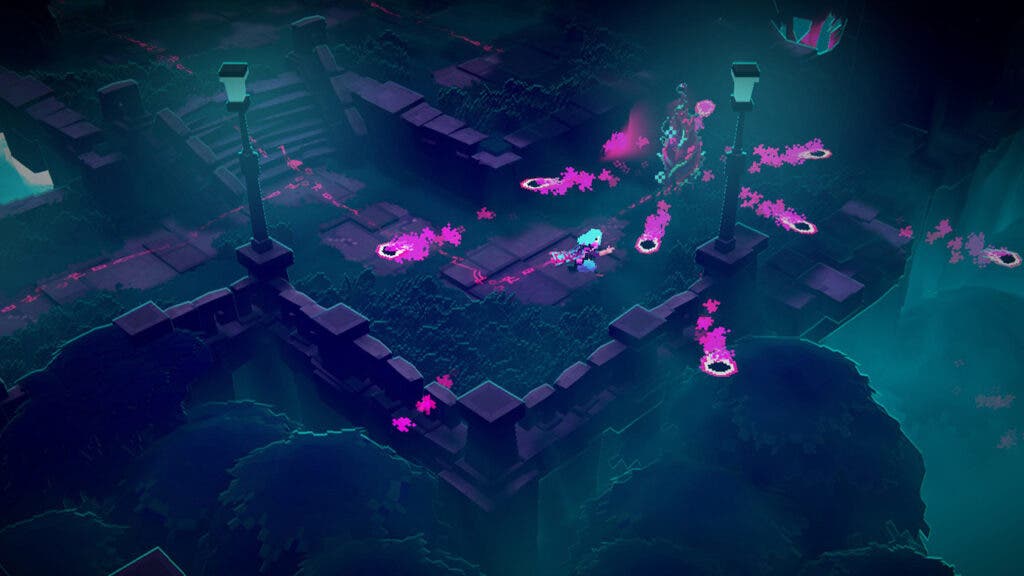 From the main menu you have the option of pick one of three difficulties before starting a run. On easy, you’re given eight hearts of health; on normal, you only have five hearts; and on hard, just a measly three. You’ll have a pool of 500 gold that you can carry at any time, with opportunities to increase that maximum amount. As you fight in these arenas, some enemies will drop shards of health that you can use to replenish. If they don’t, then you can visit shops to purchase them, or maybe wait for a station after the mid-boss battle to collect a free boost to health.

There are twenty-one arenas to work through, regardless of difficulty. At most, you’re given a binary set of choices for which direction to go next, which is more than fine. And the direction is merely about goals in how you’re speccing out your character, or what needs you have at the time. For instance, you could choose one that will let you get health back, or pursue a new weapon. Later choices could have you upgrade your primary spell, or pick up a trinket that adds a passive ability like removing gold to replenish health when you take damage. There are two mid-bosses to fight, one after seven levels completed, and another at fourteen levels completed. They aren’t very challenging, and are always the same, so at least you know what to expect. Once you learn their patterns, you’ll come out victorious every time.

Once you’ve begun a run, you’re dropped into an arena with pathways, pitfalls, and obstacles as simple as stairs. However, these arenas also have trees, rocks, and other objects in the background, and unfortunately in the foreground. As a result, I ended up missing shots when using a projectile-based spell. A lot of this is due in part to the game’s camera being too low, and not enough top-down to avoid such problems. Additionally, these objects should be transparent or the camera should cut them away to highlight the character in these situations. I found these issues to not be too impacting, but enough that they couldn’t be ignored. Funny enough, the game telegraphs where monsters will teleport in, giving you the opportunity to kill them the moment they materialize. For me, it feels cheap, but it’s still a tactic I will happily exploit in my favor.

Oddly, there’s no mid-game save, so if you choose to quit a run and return later, you lose that entire run. There’s no warning or info box to tell you this, but you have to complete a run in a single sitting, or leave it paused. Now, completing the game takes around 30 minutes on easy and normal difficulties, but it’s still an odd choice. I do hope a mid-game save gets added shortly after release, because it’s sorely missed. Additionally, there doesn’t appear to be any persistence. Weapons upgraded get reset, and any trinkets you’ve collected and upgraded do too. As a result, the desire to do another run is squandered by this misstep and odd design choice. That said, the Survival Mode is a place to really test your skills in a gauntlet that does have an ending, along with its own difficulty settings as well. Survival is a challenging time, but the ‘normal mode’ as it’s called in the game, is way more fun. 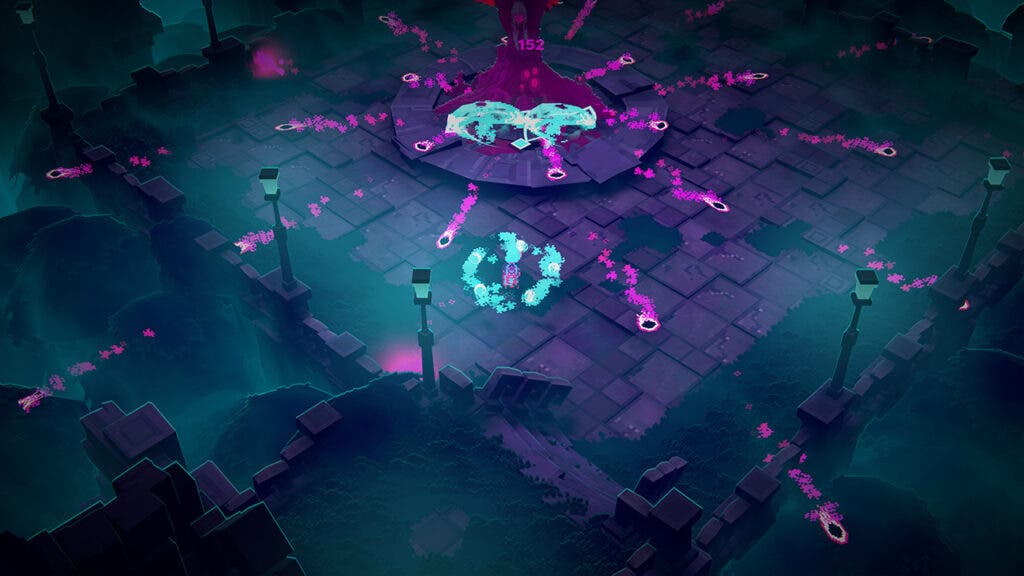 Cuddle Monster Games really loves their purples and blues, something that was actually prevalent in Hell is Other Demons, and it continues here to great effect. All the locations you visit are unique, but share a common color scheme in that it feels familiar. This is all works well with the house music soundtrack, which keeps the tempo up and feels right for the game.

Leaderboards do drive all the desire to replay the game to beat that friend or stranger who bested you, but it can also be a deterrent. If you don’t care for that sort of thing, the game relies heavily on the score chasing for each of the game’s difficulty. How this will factor for you is subjective. Even as someone who enjoys leaderboards, it wasn’t enough to keep my interest. 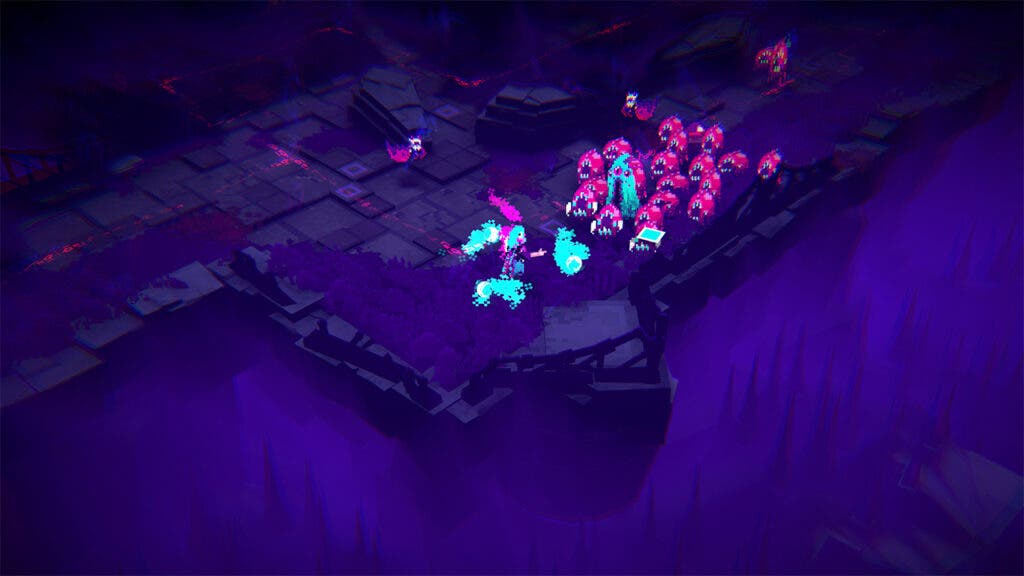 LONE RUIN is good fun for however long you’re able to give it. It’s a shame that it’s rather shallow offerings across two modes can’t be more than a couple of hours. Coming off Hell is Other Demons, I was hoping for more with Cuddle Monster Games, and the reality is that we got less. LONE RUIN is visually stunning, has a variety of spells and character builds to make, but doesn’t have the longevity to keep you coming back for more.