Hot off the heels of its launch earlier this month (and our review), Demiurge Studios and Ubisoft are proud to announce that its beer-fueled run-and-gun co-op romp, Shoot Many Robots, is heading to Steam on April 6, 2012. Starting today and going through launch, those that pre-order through Steam for just $9.99 will receive a litany of bonuses, including: buy three, get one free (the Steam Four Pack); special gear that enables you to kick butt as Gordon Freeman from Half Life; the dreaded Portal turrets will replace some of the enemy robots; and a special backpack for Team Fortress 2, the Chopper Bot, for the Pyro and Medic classes.

The PC version of Shoot Many Robots is in extremely good and capable hands – Demiurge Studios is the team responsible for bringing the PC version of Mass Effect to the…masses. The PC version will boast sexier graphics (up to 2560×1600 resolution and 60 fps), overhauled and PC-optimized controls and interfaces, fully integrated Steam matching, Facebook matchmaking, Steam achievements and integrated voice chat.

“We’re dedicated PC gamers here at Demiurge Studios, and we wanted to make sure and take the time to do the PC version right,” said Albert Reed, CEO. “We rebuilt the controls for PC and overhauled the user interface so it won’t feel like you’ve turned your keyboard into a gamepad that makes clicky sounds – every detail has been considered to make this an optimized and seamless experience.”

To help kick things on the PC front off, Demiurge Studios will be in their backyard of Boston for PAX East 2012, April 6–8 at the Boston Convention and Exhibition Center (BCEC) and will be showing off the fully playable PC version of SMR for the first time anywhere. They’ll also be doling out item cards with code redeemable for in-game loot, so be sure to stop by Booth 612 to blow stuff up and grab your code!

Released by Ubisoft and Demiurge Studios (collaborators on Borderlands, Brothers in Arms, Mass Effect), Shoot Many Robots is a four-player co-op run-n-gun RPG shooter that lets you take out a tidal wave of rusting hulks of metal and degenerating circuits with an array of weaponry that would make any shooter enthusiast proud. Shoot Many Robots™ is packed full of big guns, massive explosions, giant bosses, four-player online mayhem and a ton of customizable gear to unlock.

For more information on either the PC version of Shoot Many Robots™ or Demiurge Studios, please visit www.demiurgestudios.com.

Today, Ubisoft announced that Shoot Many Robots, a 2.5D side-scrolling shooter game, is now available on Xbox LIVE Arcade for the Xbox 360 as well as Sony Entertainment Network. And funny enough, we have a launch day review of SMR.

Developed by Demiurge Studios and published by Ubisoft, Shoot Many Robots stars P. Walter Tugnut, a hillbilly who stockpiles guns, ammo, and beer in his dilapidated RV, awaiting the inevitable robot apocalypse. When the abandoned factory in the distance begins producing robots on its own, Walter sets off in his RV on a robot-killing rampage, hoping to save humanity from an onslaught of robot hordes. 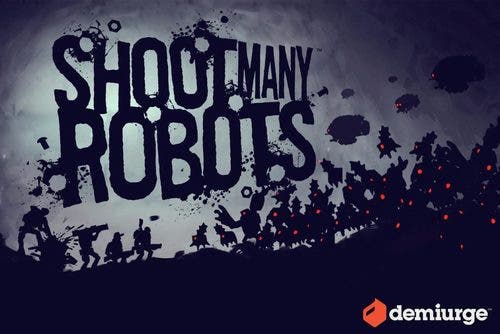 Shoot Many Robots can be Dismantled on March 14th

Today, Ubisoft and Demiurge Studios announced that the four-player co-op shoot ‘em up Shoot Many Robots will launch later next month. Players can download Shoot Many Robots on March 13 for PlayStation Network for $9.99 and March 14 on Xbox LIVE Arcade for the Xbox 360 video game and entertainment system from Microsoft for 800 Microsoft Points.

P. Walter Tugnut will be up against a massive army of killer robots. Take a look at some of the new additions to this mechanical army here:

There’s a new Shoot Many Robots trailer, “Meet The Robots”. Developed by Demiurge Studios, Shoot Many Robots will be available for Xbox LIVE Arcade and PlayStation Network. Last time we saw it, we saw the Rendering Modes.

“Shoot Many Robots” is on its way, coming to XBLA and PSN very soon. In the meantime, Demiurge Studios has created a very compelling ‘Render This’ video, giving a “behind the curtain” look at the game’s development. Showing off the various rendering modes that are used to catch bugs. It’s also a great way to see the layers of gameplay peeled back to see how it all comes together.