Guns of Icarus Online is a team-based multiplayer online airship combat game set in a steampunk/dieselpunk-inspired, post-apocalyptic world. Captain or serve as crew aboard an airship with your friends and fly into battle for wealth and glory! 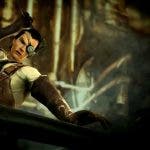