As the only human in St. PigeoNations prestigious school for birds you’ll encounter a feathered cast of characters and choose a suitable love interest all while managing elective school classes. Follow your heart as you choose your path and go on romantic dates you but be wary of fowl twists and turns along the way that could turn your love life upside down. There has literally never been a pigeon dating visual novel like Hatoful Boyfriend before.

“Our research shows that consumer fatigue for space marines and dragons is at an all-time high  gamers are ready for something new and fresh”, said Devolver Digital CFO Fork Parker. ”Semi-realistic pigeon dating simulations are the next great frontier in video games.” 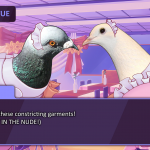 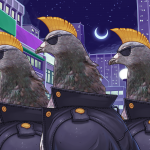 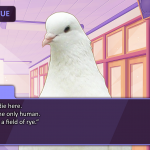 Playable at E3 2014 by appointment only, Hatoful Boyfriend will launch later this summer on PC and Mac via Steam, GOG, Humble, and other digital storefronts.