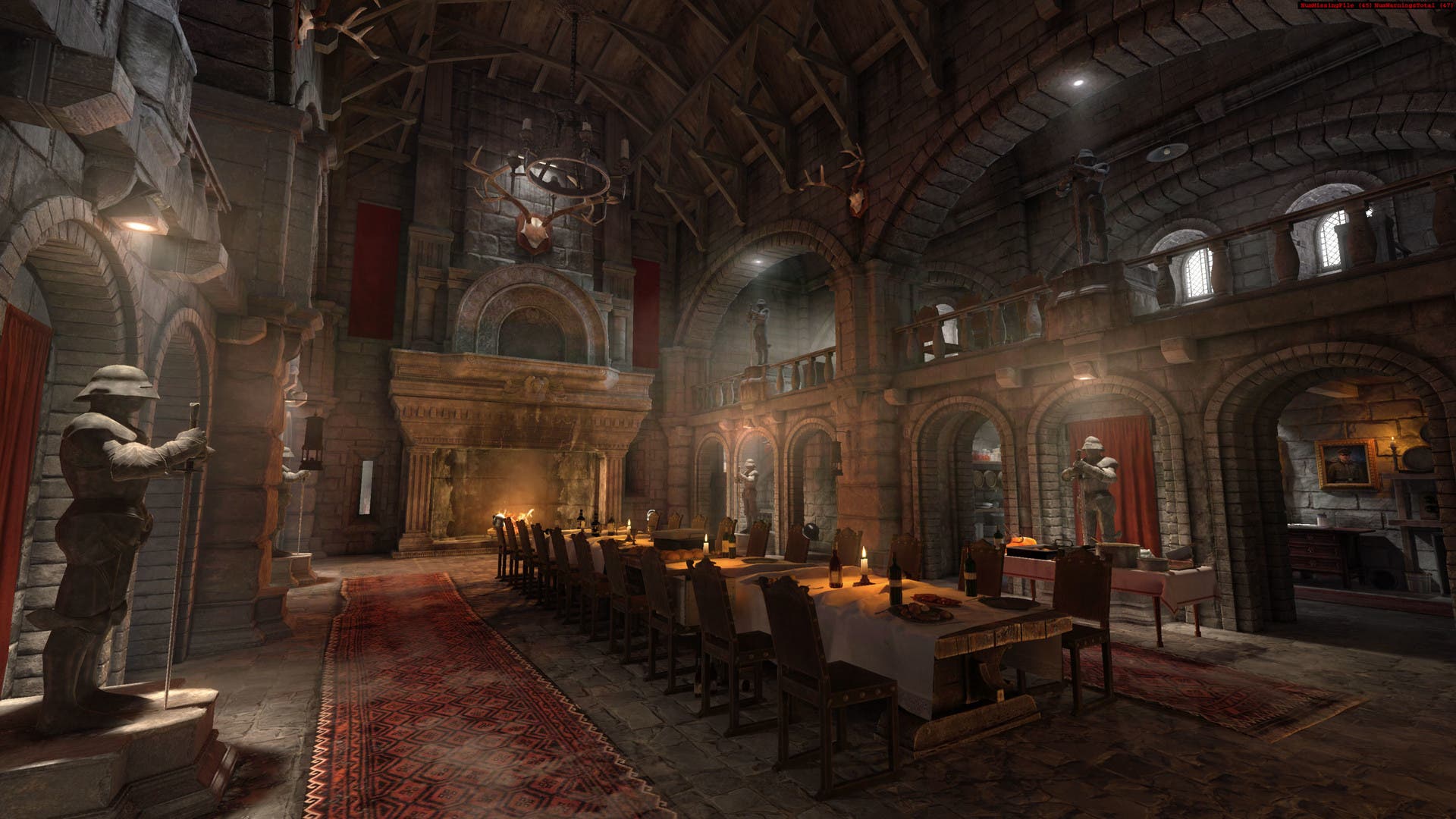 “What’s old is new again.” Wolfenstein: The Old Blood comes out not even a full year removed from the fantastic and absolutely surprising Wolfenstein: The New Order, and MachineGames has cranked out a standalone prequel. It is a game that requires no prior knowledge of the events of The New Order to enjoy and get accustomed how it plays. While it didn’t give the same impression that The New Order left me with, but The Old Blood is still an incredibly solid shooter with interesting events making it a worthwhile, albeit short playthrough. It is good to return to Castle Wolfenstein. 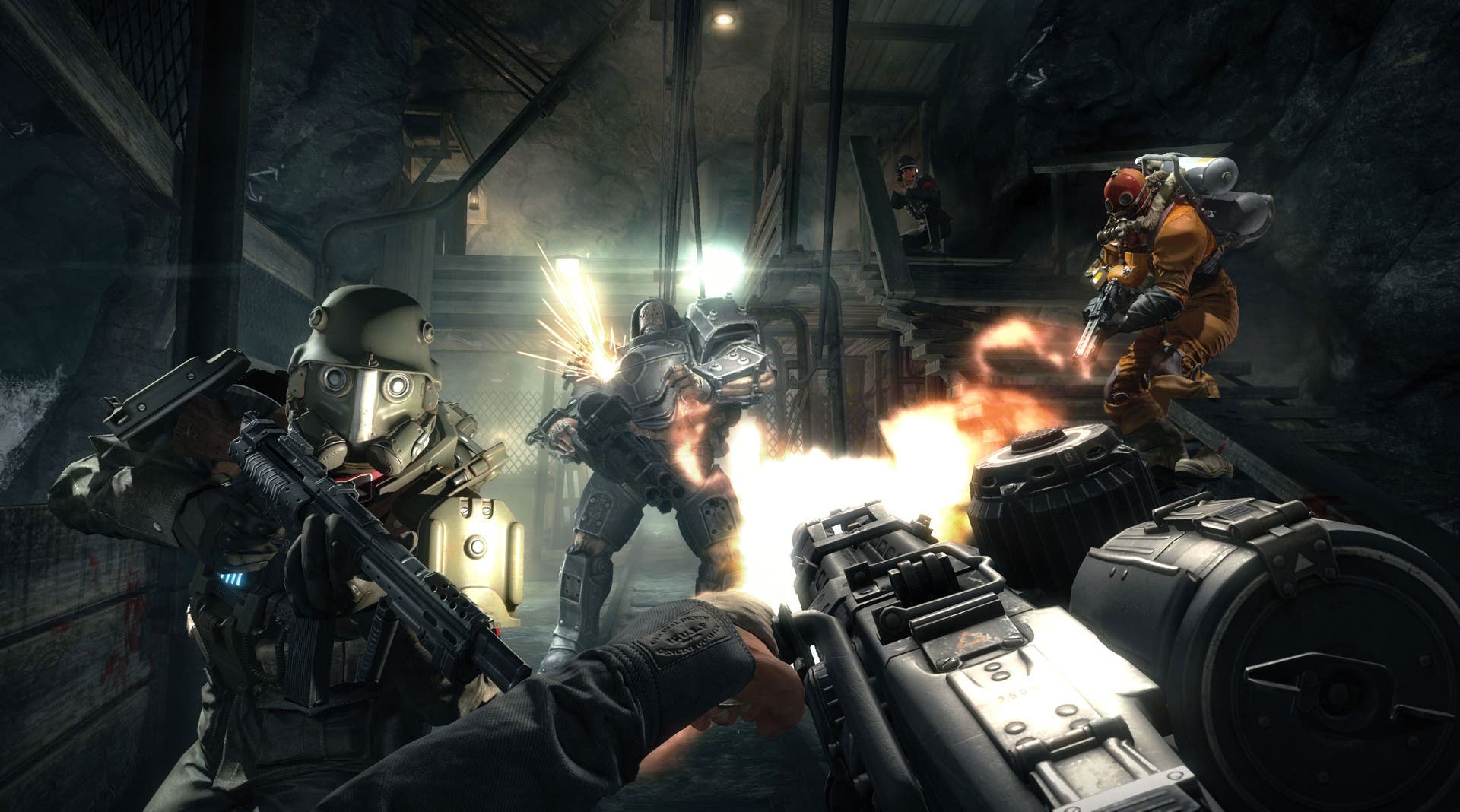 This prequel is for anyone, so if you’ve never played the new Wolfenstein you can jump right in, or those who are fans of The New Order can come to see the events that came before it. Wolfenstein: The Old Blood plays out over two acts across eight chapters, starting with “Rudi Jager and the Den of Wolves”, followed by “The Dark Secrets of Helga von Schabbs.” While they sound like completely different stories, they are interconnected and follow our hero, William Joseph “B.J.” Blazkowicz looking for the coordinates to General Deathshead’s compound, and as such, he’ll eventually infiltrate the Nazi Paranormal Division, to devastating realizations of what they’re messing with.

Wolfenstein: The New Order broke up the action with stealth gameplay and interludes with no fighting to talk and learn about the people living in hiding on an emotional level. The Old Blood lacks that type of character building and down time, save for levels that start off as stealth, and can quickly to action as soon as you’re spotted. The lack of any viewing to the outside world does make the game feel disconnected, so you won’t see Jimi Hendrix or hear German alternative covers of popular songs quite yet. But hey, B.J.is shirtless for over half the game, so if you’re into that sort of thing… 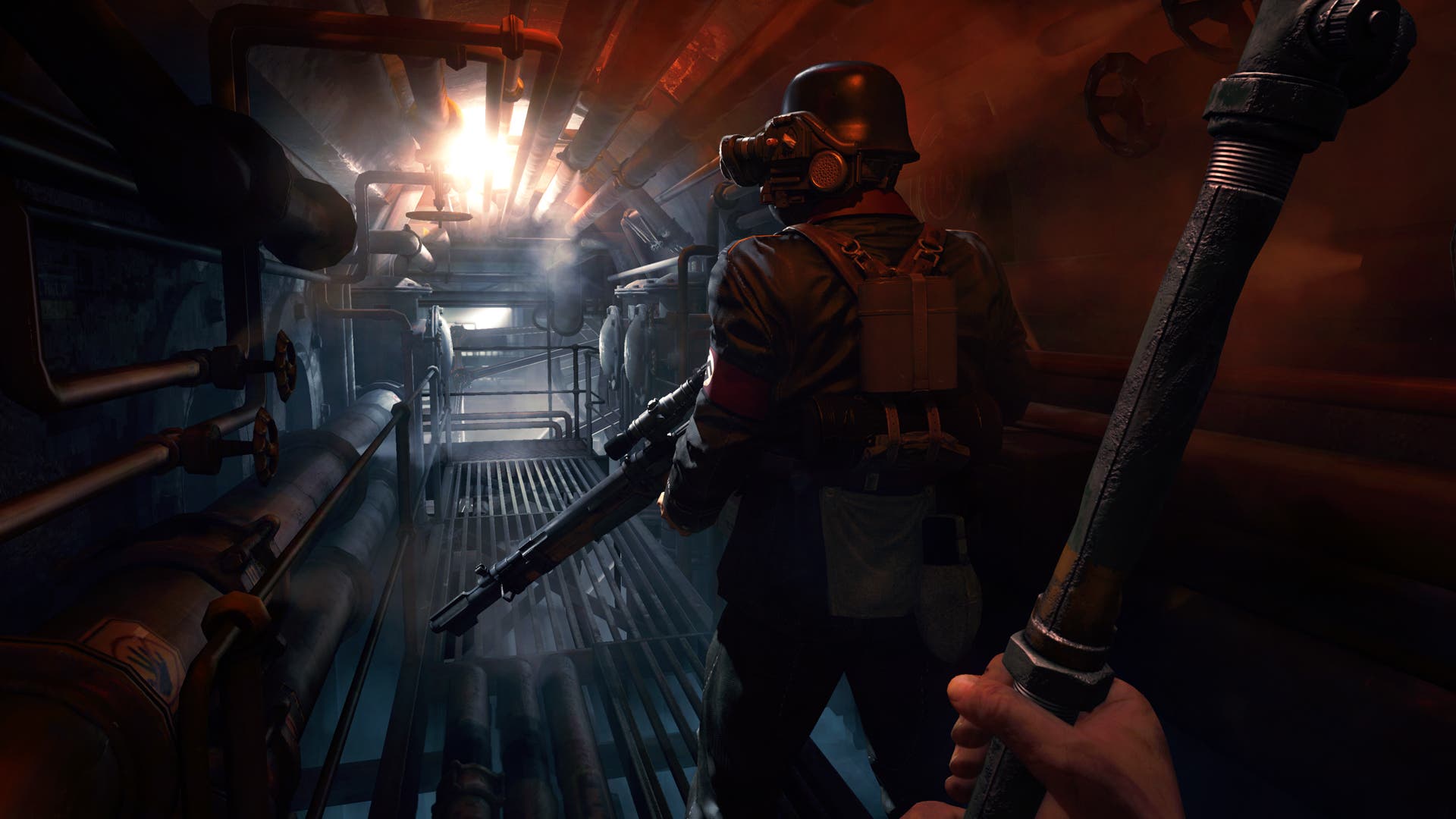 Early on, after being imprisoned for a brief period of time, you accidentally break a pipe piece loose trying to escape, which becomes a weapon of opportunity for B.J. to impale Nazi’s with great prejudice. The pipes can be used in the stealth sections and deliver unique and devastating killing blows, complete with blood spurting out of the pipe. These pipes combine, and while held with two hands are a slower, but stronger attack. And lastly, these pipes can be used for climbing, this is a great mechanic of alternating buttons or triggers to hold your position on the wall.

As the game takes place in 1946, none of the fancy weaponry of The New Order makes an appearance, but MachineGames did introduce some era-appropriate weaponry work within the confines of The Old Blood. While scarce in ammo, the Kampfpistole is a handgun that shoots explosive rounds that take out groups of enemies or well-armored enemies in one shot. There’s a bolt-action rifle that helps with the long range game, and of course the trusty double-barreled shotgun appears during a very tense moment, making it a savior going forward. 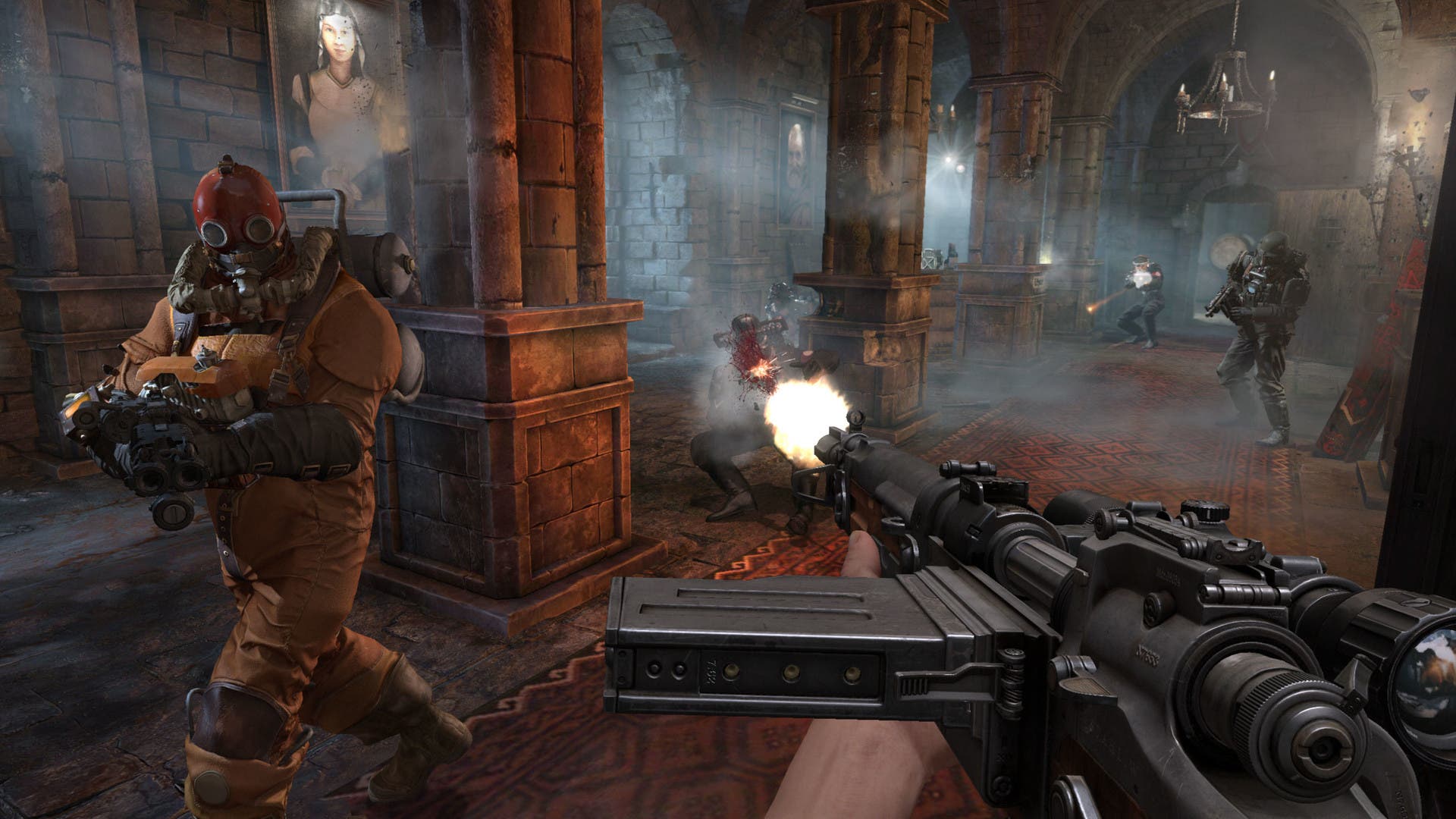 The twist, if you could even call it that, is in the second act where they introduce zombies. You really shouldn’t be surprised, as the trailers leading up the release revealed them. And given this is World War II, a game about dealing with the occult or supernatural, and a game where Nazi’s are involved, there’s bound to be zombies. When combating these brain-crazed nightmares, you don’t ever feel like you’re outwitting them, you just send bullets into their head and they die: wash, rinse, repeat for far the final chapters.

The perk system from The New Order returns for The Old Blood, having you complete certain actions like collecting Nazi helmets which allow for armor to be overcharged, or killing a set number of enemies from cover. The Wolfenstein 3D nightmares are fleshed out this time around, with one to be found per chapter. Collectibles in the form of gold, are hidden around each of the levels, encouraging exploration before moving on. 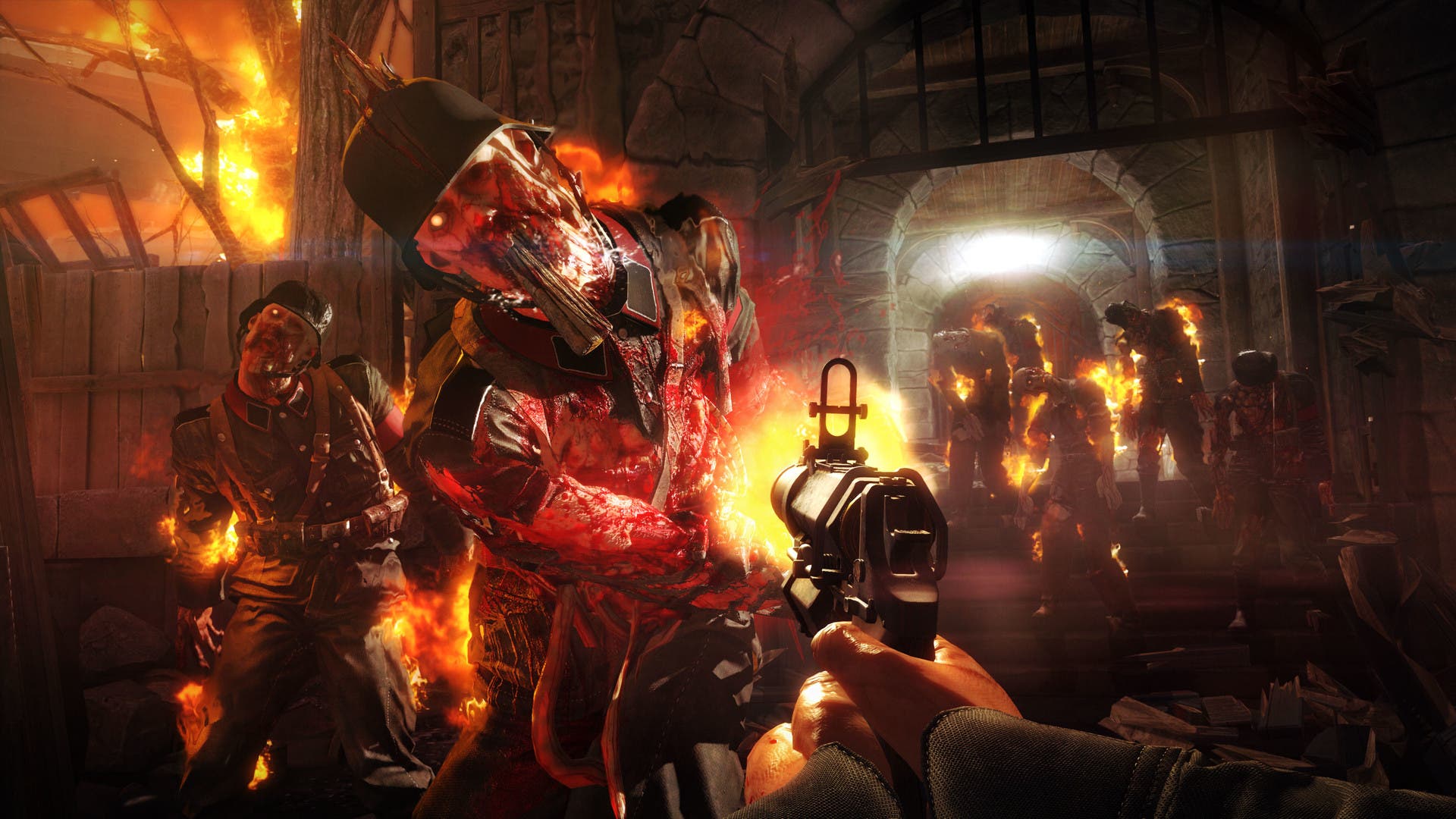