The Technomancer, the new post-apocalyptic RPG set in a cyberpunk world for PlayStation 4, Xbox One and PC from developer Spiders, will be presented in more detail at E3 Los Angeles in June. Set on Mars, the red planet, the game follows the quest of an aspiring Technomancer, who faces a myriad of questions as his future grows threatened by the secrets of his past.

Today’s screenshots show this Technomancer and his companions arriving at Noctis, one of the last strongholds of civilization on Mars. Noctis is one of the many locations you will get to explore during your adventure. A “free city” that isolated itself from the War of Water, which opposes the grand Companies such as Aurora and Abundance, Noctis still holds great dangers: bandits, pillagers, and some dangerous creatures who will put your warrior skills to the test. 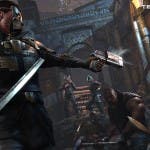