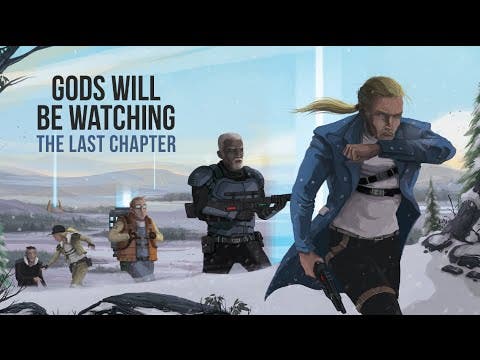 Gods Will Be Watching updates with Free DLC, “The Last Chapter”

Set twenty years after the close of the original game, players will again be tasked with making tough decisions in the tense conflict enveloping the galaxy. Liam, the leader of the fallen freedom fighter organization Xenolifer, gathers the scattered members of Sgt. Burdens old unit and embarks on a desperate quest to change the past and prevent the oppressive Constellar Federation from ever coming to power.

There were never plans to create a full-fledged sequel to Gods Will Be Watching, that story has been told, said Jordi El Guapo de Paco, studio lead at Deconstructeam. But we wanted to further explore the plight of Sgt. Burdens team in such a dark time and give the fans of Gods Will Be Watching a glimpse into the future of the characters they had come to know so well.

Gods Will Be Watching is a minimalistic point and click thriller centered on despair, commitment, and sacrifice as players face intriguing puzzles and tough decisions that will affect their entire crews wellbeing. Originally released in July 2014, Deconstructeams debut commercial release went on to sell over 100,000 copies and stretch the idea of what was possible with the traditional point and click adventure.