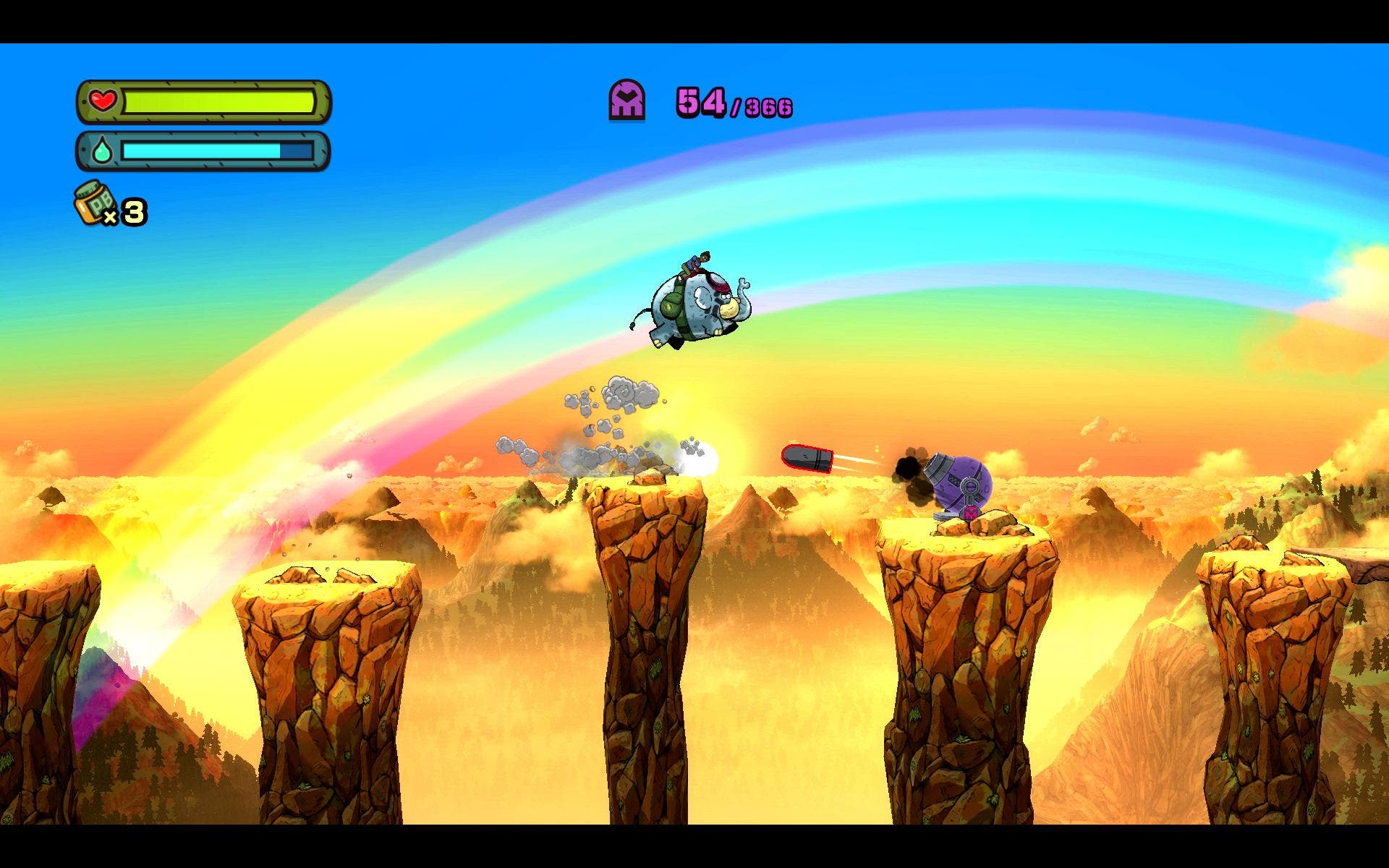 Tembo is an unlikely hero, but makes for an impressive debut from Pokemon developer, Game Freak. With SEGA as the publisher of this game, comparisons with the Sonic series and Tembo are not far off, but there’s a unique twist here with a game all its own. While there are a few problems with Tembo the Badass Elephant, there’s way more to enjoy than not. Told in comic-strip cutscenes, the story is light, but appropriate in what is basically “Operation Dumbo Drop” with a bit more grim of a premise. There’s the Phantom Force, which are colored purple (just like the movie “The Phantom” featuring Billy Zane) who are the bad guys that must be stopped. It’s here where Tembo is summoned to put a stop to them. In one of the neatest things is being able to walk up to the console at command and select your mission, making it part of the world than just a menu.

Anyone familiar with 2D platformers will be at home with what Tembo the Badass Elephant plays like, if Sonic was a 5-ton elephant, that is. Tembo can dash, jump, uppercut, roll, float, and perform combos like a jump dash, or dash to roll to take out enemies. These moves are not very complicated, and the tutorial level teaches you everything you need to know how to use the elephant. Surprises remain within the levels as you progress to use those teachings to succeed. You’ll be collecting peanuts while making your way through a level, putting them in a jar to make peanut butter (simultaneously that is). For every 300 peanuts collected, a new life is earned via a peanut butter jar. If you manage to lose all your jars, you have to start the level over, and the Commander will replenish you with five new lives. There are checkpoints within a level that these lives become useful, and you’ll be able to continue a level from that point so long as you have a jar on you.

The core of the game beyond killing, or at least maiming these enemies before they disappear in a cloud of purpose smoke is to also save civilians. These civilians will visibly get on and ride with Tembo for the remainder of the level. This is such a great visual to see. When a level is completed, everything gets tallied up at the end: enemies killed, civilians saved, and your total time. Complete everything, and you earn medals for your efforts, and trophies as well. While this is a 2D platformer, it does have launchers that will send you into the foreground or background, giving the game some depth along the z-axis where normally you don’t go. It also makes it easy to regain health, collect peanut butter, or destroy enemies in the way. There’s no skill to obtaining these, is a “gimme”. Everything else within the level has to be earned or sought after. Tembo the Badass Elephant has boss battles, as one would expect from the genre that caps off a section before being able to move on. The first boss fight is a complete cakewalk and another of the game’s “gimmes”.

While the game seemingly is easy, later levels of each section become more demanding of you. Later, you’ll find that access to levels are gated by obtaining a specific number enemy kills to unlock, so going back and replaying a level is a really fun time and something to work for. Nearly everything crumbles, crashes, or breaks at the touch of Tembo’s heavy elephant feet. The bad guys have tanks, helicopters, dudes with flamethrowers, machine guns, turrets that shoot rockets to try to stop you. The variety of things introduced eventually run out, and then you learn everything you need to do with any given level.

As every elephant does, you are able to shoot water from your trunk to put out fires that are stationary or moving. Meanwhile, there are split paths within the traversal of levels, sometimes without a way to backtrack or otherwise return to, to cleanup enemies or civilians that may be there. The art is incredibly crisp and detailed, and the fluidity of playing is seen better in motion than in screenshots. There’s a great sense of locomotion when using Tembo as you crash through the Shadow Force and objects. Tembo The Badass Elephant may be a silly, groan-inducing name, but it is no doubt a wonderful, precise platformer that’s worthy of your short time and money.

A PlayStation 4 code was provided by SEGA for review purposes