Ashes of the Singularity Beta 2 gets New DirectX 12 Benchmark

Ashes of the Singularity takes place in a post-technological singularity universe in which humans have begun to colonize the stars. Now, they face a foe that threatens to annihilate them, the Substrate, a race of machines that seeks to control the same worlds that humanity is claiming.

Beta 2 includes a new DirectX 12 benchmark developed by Oxide Games as well as explicit support for new DirectX 12 features such as multiple GPUs and Asynchronous compute.

“With this update, players can improve game performance by adding another video card,” said Dan Baker, Chief Scientist at Oxide Games. “As long as the two cards are reasonably similar in performance, they can be of any model or brand including mixing AMD and NVidia cards together. Players just insert the additional video card and enable it via the game’s video options panel.”

The new benchmark is accessible by users from the main menu with different display preferences available from the options menu.

“Ashes of the Singularity isn’t just a battle, it’s a war across an entire world,” said Brad Wardell, Executive Producer of Ashes of the Singularity. “As visually stunning as the game can be, the success of the game is dependent on the gameplay. That’s why we’re investing so much into making sure the computer opponents are such worthy adversaries.”

Beta 2 is now available in Early Access on both Steam and GOG. It includes single player skirmish, co-op multiplayer, and ranked multiplayer. 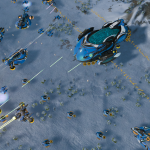 To learn more about Ashes of the Singularity visit www.ashesofthesingularity.com.