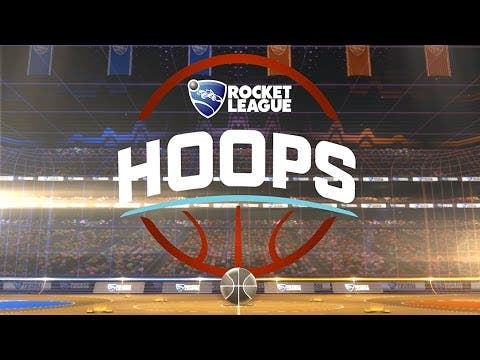 Independent video game developer and publisher, Psyonix, is pleased to announce that on Tuesday, April 26, Rocket League fans can download the highly-anticipated basketball-inspired Hoops mode for FREE as part of a regularly-scheduled game update. In addition, an officially-licensed “NBA Flag Pack,” containing the logos of all 30 NBA teams represented as in-game flags, will also be available for sale as premium DLC.

Following the positive community reaction to the “Snow Day” Hockey Mode released late last year, Psyonix’s new Hoops mode adds a dynamic basketball twist to the wildly-successful soccer-meets-driving concept. In addition to the mode itself, Rocket League Hoops will also come with a FREE new arena called “Dunk House,” where the net itself can be used as a ramp for the ball, and Aerials and wall-play is the key to victory. The new Hoops mode update is FREE on Xbox One, PlayStation®4 computer entertainment system, and Windows PC via Steam and includes a NBA logo flag for all players.

For basketball fans eager to represent their favorite NBA team on the Rocket League hardwood, the NBA Flag Pack retails for $1.99 USD (or regional equivalent) and gives players immediate access to all 30 teams.