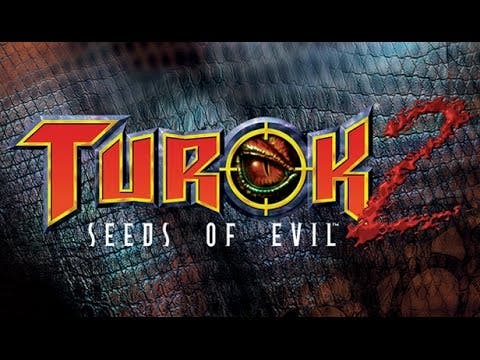 Turok 2: Seeds of Evil returns to PC thanks to Nightdive Studios

Nightdive Studios, a company specializing in the restoration of classic PC game titles and the publisher behind the successful release of Turok in 2015, is pleased to announce that it will be releasing the sequel, Turok 2: Seeds of Evil on March 16th, 2017.

Turok 2: Seeds of Evil is a first person shooter where players assume the role of Turok, an intrepid warrior, fighting their way through a host of new enemies, weapons, and missions. When the game was first released for the Nintendo 64 console, it sold over one million copies, making it a smash success. As Turok, players can run, jump, climb ladders, swim, dive underwater, and even explore a futuristic setting. The remastered game transports players into a sprawling environment with vicious enemies lurking behind every corner. Fans can look forward to new grotesque bosses and over 20 new weapons, including the skull-drilling favorite – The Cerebral Bore – that will send enemy brains flying!

In a thrilling new feature, Turok 2: Seeds of Evil also adds a multiplayer game mode in “Last Turok Standing” where players can battle with friends for an even more visceral gaming experience.

Stephen Kick, CEO and Founder of Nightdive Studios, explains, “Turok 2: Seeds of Evil does more than just continue the series. From the moment that a player first begins their quest in the Port of Adia, they will face a whole new series of challenges and puzzles to solve. Players will also get to use a whole new series of weapons to overcome these challenges. And best of all, players will get to use these weapons against their friends in multiplayer mode!”

Stephen Kick added, “When restoring these classic games, it is important to ensure that they will play on as many different computer hardware configurations as possible. Working with Intel allows our developers to tune the game’s performance to achieve those results.” As a member of the Intel game development community, Nightdive Studios relies on Intel’s tools to optimize game PC performance and to ensure compatibility with today’s modern computers.

At this year’s Game Developers Conference in San Francisco, on March 1st, 2017, from 10AM until 2PM, Turok 2: Seeds of Evil will be available to play and demo at the Intel booth on the GDC Sky Bridges.

Turok 2: Seeds of Evil will be available to consumers on March 16th, 2017 for PC on digital platforms including Steam, GOG.com, and the Humble Store. The pre-sale for the game is available now at: http://store.steampowered.com/app/405830/