Can you hear the excitement?

This morning, leading gaming headset and audio accessory brand Turtle Beach Corporation (NASDAQ: HEAR) announced another “first” in the company’s long history of driving innovation in the gaming headset market with the availability of the all-new Stealth 600 wireless surround sound headset for the Xbox One family of devices (Xbox One, Xbox One S, and Xbox One X). Today’s launch makes the Stealth 600 for Xbox One the first-ever gaming headset available at retail that uses Microsoft’s Xbox Wireless technology to connect directly to the console, just like your wireless controller does. No wires, no base station, and no adapter needed. With the Stealth 600 paired directly to Xbox One, gamers simply need to turn on their headset and start playing. Beyond the ease of Xbox Wireless connectivity, the Stealth 600 is optimized to deliver immersive Windows Sonic surround sound and crystal clear chat through large, powerful 50mm speakers and a new flip-up version of Turtle Beach’s renowned high-sensitivity mic. The Stealth 600 for Xbox One also features everything from Turtle Beach’s unique ProSpecs™ Glasses Friendly and comfort-driven design to its exclusive Superhuman Hearing™ sound setting that gives players a competitive advantage to help them win more.

“With today’s availability of the Stealth 600 for Xbox One and the upcoming availability of the Stealth 700, we continue to cement our clear category leadership position by driving innovation and being first to market with groundbreaking features and functionality,” said Juergen Stark, CEO, Turtle Beach Corporation. “We work tirelessly to be at the forefront of gaming audio so delivering another significant industry first is already a pride point for Turtle Beach, but we’re even more excited to delight our fans by making the Stealth 600for Xbox One available ahead of schedule, especially with this year’s upcoming AAA game launches right around the corner.”

Gaming technology is advancing fast, and the Stealth 600 for Xbox One offers gamers a wealth of features, functionality, and comfort, including:

Xbox Wireless – Enjoy the simplicity and superiority of a direct connection from your headset to your console – no wires, no base station, and no adapter needed.

Flip-up Microphone – Turtle Beach’s renowned high-sensitivity mic picks up your voice loud and clear, and flips up to mute.

Mic Monitoring – Hear the volume of your voice inside the headset so you never have to shout.

All-Day Battery Life – Always be ready to play with up to 15-hours of gaming per charge. 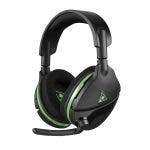