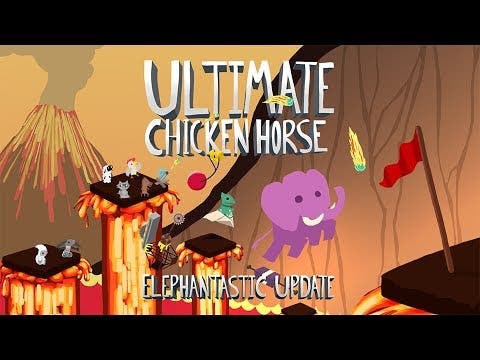 Ultimate Chicken Horse comes to PS4 on December 12th, has cross-play with PC

Ultimate Chicken Horse, the critically-acclaimed party platformer where friends build the level as they play, makes the jump to PlayStation 4 on December 12th, with Xbox One and Nintendo Switch™ coming soon after.

After over 450k copies sold on PC, more than 200M views on YouTube and an IGF design nomination, Clever Endeavour Games will give console players the chance to experience what EuroGamer called “an early frontrunner for Game of the Year.”

The console release will coincide with the Elephantastic Update, a massive addition of new content for all platforms featuring a brand new Elephant character, new Jungle Temple and Volcano levels, new platforms and traps, as well as an exciting new game mode.

In Challenge Mode, players can build, save, and share custom platforming levels with their friends and with the world, competing on global leaderboards for best times. A level discovery system will allow players to find trending levels, categorize them by difficulty, or find levels that friends have made.

In Ultimate Chicken Horse, friends construct stages as they play, placing deadly traps before trying to reach the end of the level. If an animal can make it but their friends cannot, the one who reaches the end scores points! Play online or locally and experiment with a wide variety of platforms to find new ways to mess with friends.

– Play with friends online and locally
– Alternate between strategic block placement and twitch control platforming
– Select from a huge library of blocks to create an infinite variety of levels
– Discover locations such as the Farm, Iceberg, Dance Party, Pyramids and more
– Create, save, and share custom levels
– Challenge friends to beat your levels in Challenge Mode, with global leaderboards
– Play as a chicken, horse, sheep, and other wonderful animals
– Fun, cartoony art style
– Sweet funky soundtrack