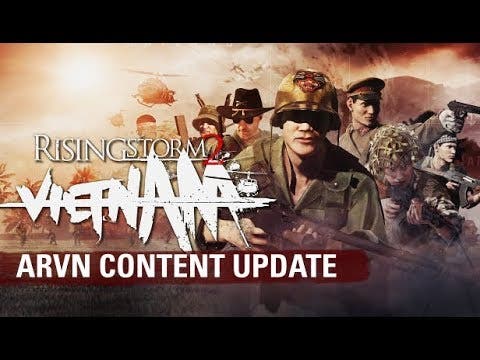 ROSWELL, Ga. — Tuesday, May 29 — Tripwire Interactive and developer Antimatter Games continue to expand and improve their award-winning first-person shooter RISING STORM 2: VIETNAM with today’s release of the free Army of the Republic of Vietnam (ARVN) Content Update. As part of its continued commitment to support its active community with regular and significant free updates, today’s ARVN Content Update introduces the Army of the Republic of Vietnam as a playable faction along with new maps, weapons, and more.

Over one million Vietnamese served in the ARVN over the course of the Vietnam War, with over 250,000 lost in action. Largely equipped with older US military equipment and trained by foreign military advisors, ARVN soldiers bore the brunt of frontline fighting throughout the war both prior to the escalation of US military involvement and after the US began reducing its troop presence.

With the release of the ARVN update on May 29, 2018 for RISING STORM 2: VIETNAMplayers can play as soldiers in the ARVN faction for the first time, as well as enjoy new weapons and five brand-new maps.

Army of the Republic of Vietnam (ARVN) Weapons:

New Army of the Republic of Vietnam (ARVN) Maps:

New Community Maps:
Made by fans for fans, the following player-made maps from Tripwire Interactive’s recent RISING STORM 2: VIETNAM $40,000 Modding Contest will also be officially introduced to the game with the release of the ARVN update.

“Tripwire Interactive wouldn’t be here today were it not for the continued support from the Rising Storm and Killing Floor communities,” said Alan Wilson, Vice President at Tripwire Interactive. “That’s why supporting our titles with notable and free updates, like the ARVN update for RISING STORM 2: VIETNAM, continues to be a big priority for us. It’s also our chance to give our community ownership over the game by officially adding the best player-made maps to our servers.”

In addition to today’s release of the new ARVN Content Update and launch trailer Tripwire has also released a brief developer diary video entitled RISING STORM 2: VIETNAM – “ARVN Joe” Behind The Scenes. One of the voice actors for the new ARVN forces, featured in the new ARVN Content Update for RISING STORM 2: VIETNAM, is Joseph Tran. During the recording sessions for the game he asked his father to come along to act as an adviser and mentor for the role. Turns out his father is Thanh Tran, also known as “Joe.” During the war Joe, a Staff Sergeant in the ARVN, was awarded the Bronze Star for saving a another soldier’s life under fire, while operating with US forces in September 1968.

We couldn’t resist the opportunity to ask him to talk a little about his experiences and about his thoughts on the voice acting his son was doing. As you’ll see Joe was really happy his son gets to play the “good guys” for once!

Available now on PC, RISING STORM 2: VIETNAM is the sequel to Rising Storm, PC Gamer magazine’s 2013 ‘Multiplayer Game of the Year’, published by Tripwire Interactive and developed by Antimatter Games. Command your team to victory in massive 64-player battles with authentic weapons, aircraft, and maps that pit conventional military forces against guerilla forces.