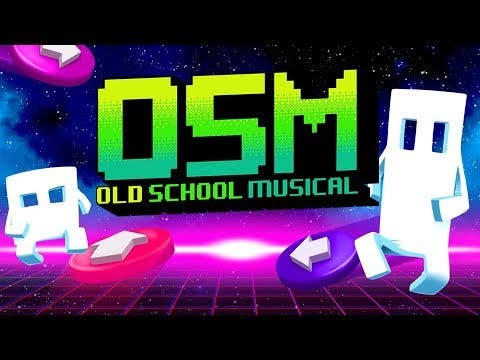 Paris – Sept. 13, 2018 – You asked for it, and it is finally here! Global game publisher Playdius and eccentric independent game developer La Moutarde announced today that its wacky rhythm game Old School Musical is now available for Nintendo Switch™ and PC. Available for a SRP of $12.99 / €12.99 via the Nintendo eShop and Steam, Old School Musical invites players to join Tib and Rob on their crazy adventure through retro worlds accompanied by a rocking chiptunes soundtrack and levels inspired by awesome 8-Bit classics. The game has been rated “E10+” by the ESRB (PEGI 12 in Europe).

Old School Musical will send players back to the golden years of the 8-Bit era. The main protagonists, Tib and Rob, have been trained to become video game heroes. One fateful day, their game becomes corrupted by a bug invasion, thus pushing them to embark on an unlikely journey to find their missing mother and save our childhood games! Your skill, their success: miss any note and Tib and Rob’s adventure will fall flat…literally!

Swing a crowbar, shoot with your spacecraft and defeat an evil chicken army to the beat of remarkable chiptune tracks from famous artists such as Dubmood, Zabutom, Hello World, Yponeko, and Le Plancton. Discover 50 tracks, all composed exclusively for the game! The Old School Musical soundtrack is also available for purchase on Steam and other music platforms. Discover some of the games’ tracks directly on Soundcloud.

And that’s not all! Did you think you would be free from the gameplay wackiness once the Story mode has ended? NO SIR! Old School Musical also features an extra storyline with in-game modifiers to enjoy many new ways of playing. Discover even more retro levels and chiptune tracks, and unveil what Tib and Rob don’t want you to know in the main plot!