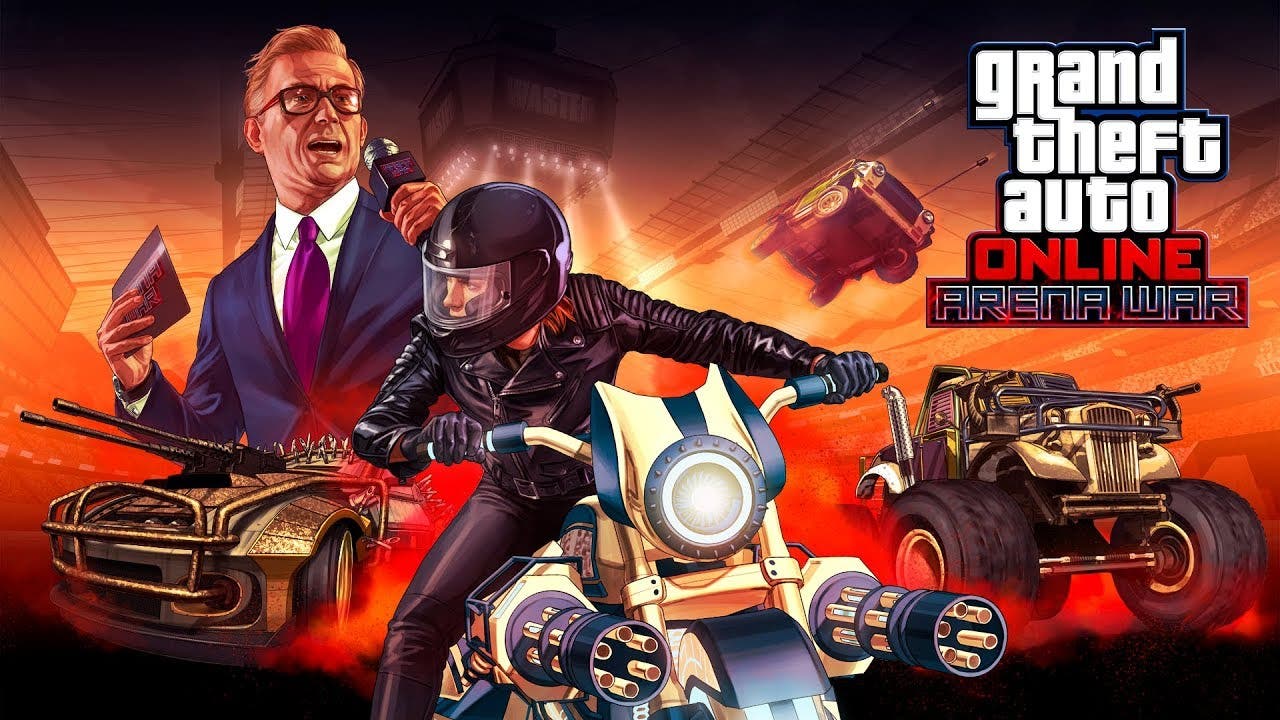 The most deranged vehicles! The most brutal weapons! The biggest crowds!

Run your own workshop, craft your own juggernauts of destruction, and track your own carnage-filled career. Live from the Maze Bank Arena, this is Arena War.

You signed up for glory, and it’s showtime. Step into destruction derbies, rain fire from strategically placed artillery and wreak havoc from the Spectator Box with EMP Drones, self-destructing RC Cars and much, much more.

No mercy, no disqualification, no safe word. Utilizing a host of new weaponized Bikes, Cars and Trucks specifically engineered for maximum destruction, be the last contender standing in an all-out vehicular brawl under the dome of the Maze Bank Arena.

If you’re any good at driving really fast and turning to the left, then you’re off to a good start. Sure, it’s theoretically possible to win a round of Wreck It by crossing the line first in a fair-and-square lap race. But that’s never happened, because the competition, recently departed Spectators and an ever-evolving set of traps and obstacles are conspiring to reduce you to a smoldering heap of scrap metal. Like the old saying goes, if it’s not a race to the death, you’re just not taking it seriously enough.

Arena War isn’t all about ruthless individualism. Sometimes there really is safety in numbers – and in Tag Team you’re going to need it. Each team has one player in the arena at a time, and their only objective is to immolate the opposition. Teammates holed up in the Spectator Box have an array of weapons at their disposal to give their partner a destructive edge.

When it comes to brutal arena designs, you can install the most exquisitely hazardous death traps on the market, but there’s just no substitute for the sheer ingenuity and sadism of a properly incentivized human being. One team collects checkpoints, the other uses every fiendish tool the Arena has to offer to make their plans go up in smoke. And be sure to hold onto your grudges: after every round, you switch places.

For centuries, gladiatorial fights to the death have brought unbridled joy to the masses. In Here Come the Monsters, one team takes to the arena in monster trucks capable of crushing metal and bone into the same bloody dust. The other guys get compact cars and a dose of anxiety meds – but if even one of them survives, they win. Let the games begin.

Life isn’t about holding onto good things, it’s about passing them on. Like inherited wealth, or a sense of entitlement. Or a high-explosive device. In Hot Bomb, one player has the bomb, and the only way to get rid of it is by crashing into someone else. Throw in a timer and a baying crowd, and survival of the fittest just got an upgrade.

If you’re eliminated from a match, pull up a stool in the greatest spectator lounge ever devised: kick back and get a drink or play the Arena War Wheel to claim a variety of prizes (the only form of roulette that has “take control of a weaponized drone” as a possible outcome).

Step into the Arena this week to receive Double GTA$ & RP across the entire Arena War Series.

While the Arena War Series is open to anyone with a dream and a death wish, those that are serious about a career in automotive violence can invest in an Arena Workshop to begin customizing their own fleet of death machines.

After purchasing your Workshop from the new ArenaWar.tv website, an onsite mechanized warfare specialist can help you strip down and supe up an assortment of vehicles. From fitting steel-shredding Buzz Saws to pelvis-shattering Ram Bars, create a chariot fit for battle and lay waste to any unfortunate bastard foolish enough to get in your way.

Head to the Career Wall in the Arena Workshop office to keep track of your progress. In addition to cash & RP, every Arena event you complete awards Arena Points based on your performance. The more AP you earn, the more rewards you’ll unlock such as discounts on specialty attire & Outfits, upgrades, modifications and more. You’ll also earn awards and trophies to adorn your trophy case as you progress through your career.

Head to the ArenaWar.tv website in game to browse listings for all 12 new Arena Contender Vehicles, each available in Future Shock, Apocalypse and Nightmare styles. Some are ready to go as soon as they’re delivered; some start life as humble road cars, with arena workshop upgrade options that’ll have them ready to burn in no time.

All GTA Online players who log in now through December 17th will receive the Annis & Bravado T-Shirts.

Step outside the Arena and benefit from up to 35% off the following:

For more information on all the latest GTA Online bonuses and coming Arena War events, head to the Social Club Events page.