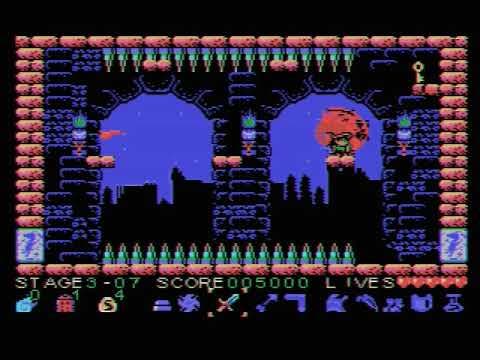 This version of Nogalious is the same one that appeared in an MSX cartridge back in January. The game is now available in both physical (MSX) and digital (Steam) formats.

Nogalious MSX is a distinct game than the one released on PC some months ago (DVD, Steam). Both share many aspects, but they have a particular disposal of platforms and enemies, as well as a slightly different graphical style.

“We feel that Nogalious MSX is a piece of art”, claims Raúl Nogalés, CEO at Luegolu3go Studios. “Nogalious MSX represents the true spirit of the games of the 80’s: extreme difficulty, pixel visuals and action platforming”.

Funded from Kickstarter with a total of 246 backers, special versions ofNogalious will also be launched on Amstrad CPC, Commodore 64, Nintendo Switch, Xbox One and PlayStation 4 later this year.

Nogalious is the first title of a trilogy of vintage platformers that depicts the story of Nogalious, his daughter Mariet, and the evil Darama. Future titlesMirilla and Dragorieta are expected to appear in 2019.

Nogalious is the first game to feature the Luegolu3go Play Game Services(LPGS) by showing cross-platform updated leaderboards between users of both the physical and digital versions on PC and MSX.

LPGS registers leaderboards, scores, payments and information from both online and offline software. Download the LGPS Reader and turn your smartphone into a tool to connect your 8-bit games to Internet.

LPGS is addressed to game studios, independent developers, students and homebrew creators. The platform is now on beta but we expect marketing it in Q3 2019. It is currently available on Android and soon on iOS.