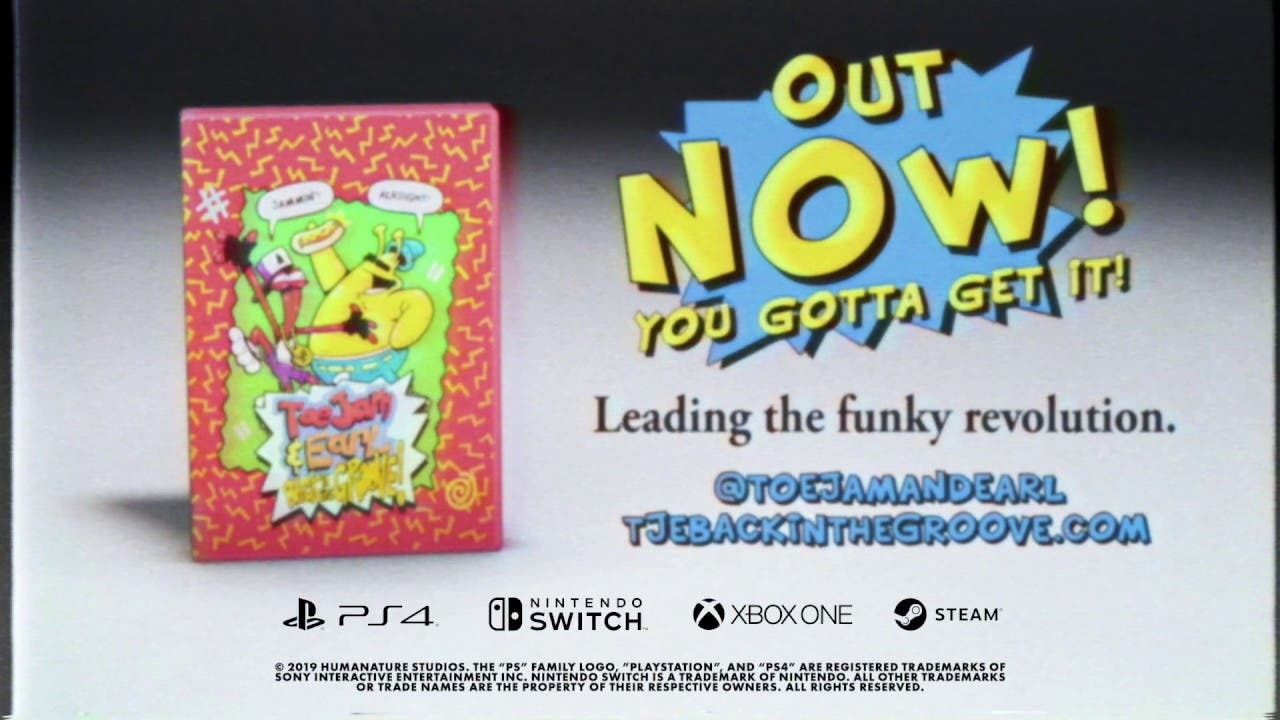 ToeJam & Earl: Back in the Groove! is a true sequel and reimagining for the series, out today on PC and consoles

SAN FRANCISCO, CA – March 1, 2019 – ToeJam & Earl: Back in the Groove!, the fourth entry of the beloved, funkadelic action roguelike series from HumaNature Studios, returns with a new adventure on Nintendo Switch™, PlayStation®4, Xbox One, PC and Mac via Steam today.

After crash-landing on Earth and mingling with those wack Earthlings in 1991, ToeJam and Earl are back, in more ways than one. On a joyride in Lamont’s Rapmaster Rocket, the duo takes their crew to see where all the craziness began. One accidental press of the “Black Hole – DO NOT PRESS” button later, both Earth and the Rapmaster Rocket are in pieces. Squad up, find those ship parts, learn to love (and hate) Earthlings all over again, and get back home!

ToeJam & Earl: Back in the Groove! re-imagines the original Sega Genesis classic while still serving as a fresh, modern sequel. Seek out ship parts hidden throughout procedurally-generated levels filled with goofy secrets. Scoop up presents that can either help or harm ToeJam and Earl — can’t know ‘til they’re unwrapped! Sometimes they get lucky and find slingshot tomatoes to pop foes or Icarus wings that let the pair soar across dangerous gaps. Other times? Yo. We don’t talk about the other times.

Tired of being called a “Weiner?” Scrounge up some XP to quickly rank up and leave that starting title behind. With each increasing rank, the characters’ stats — speed, health, present skill, search skill, inventory size, luck — improve, and getting back to Funkotron seems more likely. Unlock the full nine-character roster, all with their own stats and abilities, and earn power hats that offer persistent upgrades between runs for endless good times.

More than 50 Earthlings roam, funkin’ up ToeJam and Earl’s plans. Old “friends” like the Insane Dentist and Ice Cream Truck return, but modern times bring modern humans. Internet Trolls chuck weaponized swear words, and the Texting Person stares at their phone and tramples anyone in their path. Not all of ‘em are bad, though — that dude in the carrot suit’s legit.

Everything’s better with a homie, so drop into local or online multiplayer with up to four (online) old pals or new buddies. Rebuild the Rapmaster Rocket with their help, or jump into dope mini-games like the HyperFunk Zone, a side-scrolling track full of presents and cash. Get into dance battles with funky tunes, including classic remixes from the original.

“Our fans have waited a long time for a true sequel to the original Toejam & Earl game,” said Greg Johnson, founder of HumaNature Studios. “We’ve taken elements from Panic on Funkotron as well, and updated it all with fresh graphics, great funkadelic music, and an absolute ton of new features that emphasize replayability and multiplayer fun. I couldn’t be happier with how this game has turned out. I’m hoping our fans will feel like it’s just what they’ve been waiting for!”

ToeJam & Earl: Back in the Groove is now available in English, French, Italian, German, Spanish (Spain), and Brazilian Portuguese for Nintendo Switch, PlayStation 4, Xbox One, Windows PC and Mac via Steam for $19.99 USD.