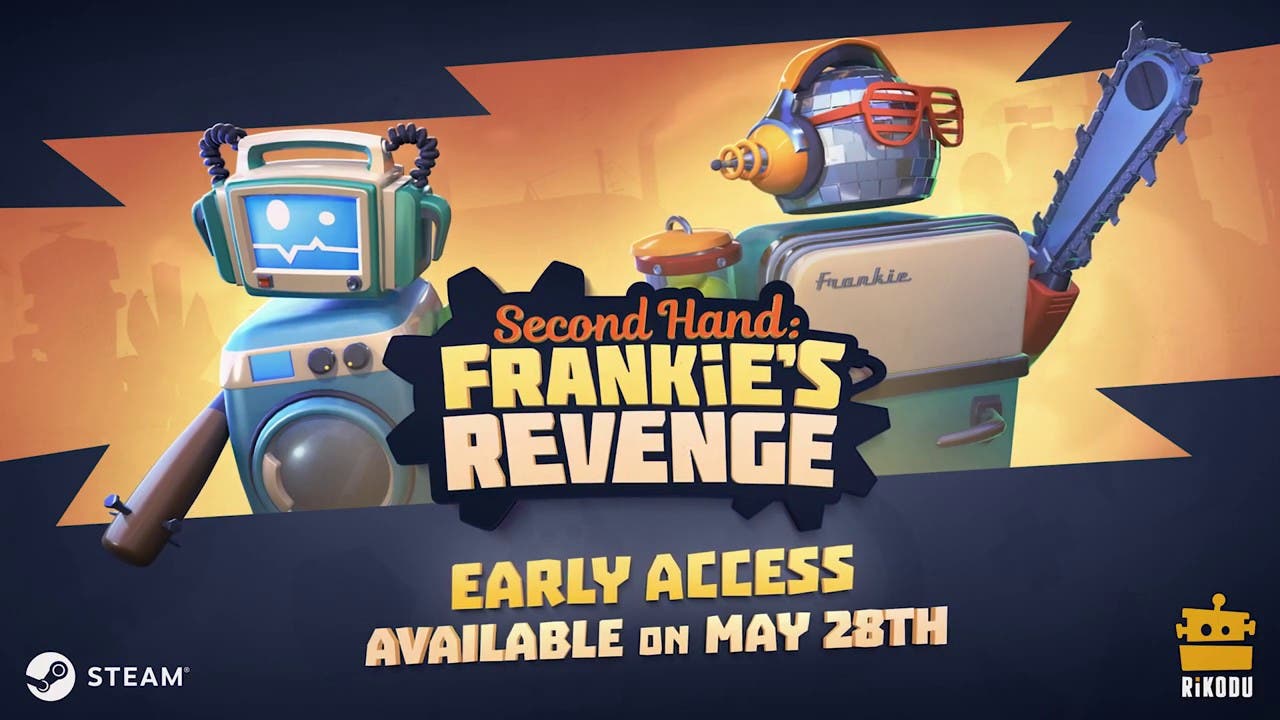 Second Hand: Frankie’s Revenge throws in everything including the kitchen sink, coming to Steam Early Access on May 28th

Next week, the ultimate clash of trash begins with the release of Rikodu’s scrap-tastic 4-player co-op robot action battler Second Hand: Frankie’s Revenge on Steam! To prepare players to go chassis-to-chassis in action-packed brawls against alien-controlled robots, we’re hitting the lights and activating the assembly line for a junkyard fashion show — showcasing but a few examples of how players can customize their own makeshift Frankie-bots and wreak mechanical mayhem!

Disco Frankie: This Frankie is devilishly handsome and in as much in love with this ‘70s chic “lewk” as he is with money and the honeys. A royal purple paint job and gold accessories for that extra splash of elegaaaaanza accentuate his washing machine-based body. Propellors, coupled with a fierce leopard print shrug, make him steal the spotlight from the other Frankies. His presence demands respect and his katana and boxing glove ensure he receives it. When he’s not beating down aliens, he is — quite literally — boogieing down the battlefield.

The Bride: Here comes the bride! This ravishing Frankie has an electric personality thanks to her defibrillator head. She enters the battle with a smile on her face, joy in her heart, and alien robot murder on her mind. She’s ready to dish out doses of both love and pain, as she brandishes her super glue gun – to keep her prey right where she wants them – and trusty machine gun arms. With a body as hot as a boiler and temper to match, she’s the whole package!

General Frankie: Atten-TION! General Frankie is tough as lead and cold-hearted when it comes to his tactics on the grease-soaked battlefield (and that’s not just because he’s 50% nuke-proof fridge). Camouflaged and ready to issue some major malfunctions to some numb-nut aliens, the General is armed with a super glue gun arm and badass baton — making him ready to knock a screw loose when needed. His all-terrain tread-legs enable him to deploy anywhere, anytime.

Steampunk Frankie: This dapper Frankie is a gentleman to his friends and a real steamy punk to his enemies. His chainsaw and modified flashlight (which shoots frickin’ lasers) dish out damage up close and from afar. And thanks to his lawnmower legs, he can close gaps with a flash. Talk about a class act!

In Frankie’s Revenge, players can define their own playstyle and customize their Frankies’ five core components — main weapon, offhand weapon, head, body, and legs. Some parts work well together naturally to achieve classic squad roles such as tank and support, affecting a Frankie’s overall health, energy, speed, and weight. Other combinations require a bit more creativity and finesse. With dozens of wacky parts and hundreds of combinations to choose from, chaotic local and online co-op matches, Frankie’s Revenge is not to be missed!

Second Hand: Frankie’s Revenge will be available on Windows PC through Steam Early Access on May 28 and will receive periodic content updates in the form of new robot parts and game modes. For more information, please visit the official website here: https://www.frankiesrevenge.com.

Keep current with all the robot-wrecking devastation by following Frankie’s Revenge on Twitter, liking it on Facebook, or joining the official Discord.