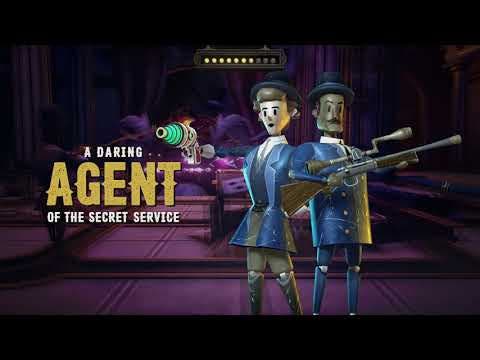 Set entirely within the confines of this titular relic from the dawn of the Electric Age, Bartlow’s Dread Machine casts one to two players as government agents in a series of escapades through New York, San Francisco, and all across the continent as they seek to rescue the kidnapped President Roosevelt from the forces of evil. But beware, sinister forces are at work!

Bound to the clockwork gizmos running this contraption, agents are mere metal figurines roving around on rails. But these aren’t any ordinary tin toys as they have free rein on how to navigate these forking networks of tracks. Think Pac-Man if he were made of metal, wore a cool peacoat, and was packing some serious heat! Sets made of wood and tin unfold around you in real-time as you navigate this immersive puppet show. Encounter a cast of improbable monsters and historical characters as you traverse the high seas and beyond using trains, ships and even a newfangled automobile!

Your journey begins in New York City with the discovery that President Teddy Roosevelt has been abducted by anarcho-satanists of the worst kind. Track his kidnappers across the Great Plains to the Pacific coast in today’s Early Access release, which contains the first three of six chapters. About once a month the game will be updated to include levels set at sea, deep in the Panamanian jungle, and finally in Washington D.C. as you close in on the culprit to save America from certain doom.

The final game features a wealth of content with 6 worlds, a host of guns, and all manner of outfits to deck out your clockwork agent. Unlock unique spins on historical characters, like Zombie General Custer and Annie Oakley. Plus the drop-in / drop-out couch co-op contains per-player difficulty, allowing each player to set the challenge level to their preference.

“As much as we love video games, we’re also admirers of old analogue tech, particularly the clockwork precision of early 20th century arcade games, so we wanted to combine the rinky-dink charm of these rustic cabinets with the smooth gameplay of contemporary titles,” said  Matthew Hoseterey Co-Founder and Director of Design of Tribetoy. “Bartlow’s Dread Machine transports us back to this wild time at the dawn of the Electric Age, when technology and entertainment were evolving so fast that the world quickly became almost unrecognizable. Plus everyone wore snazzy hats back then, which is always a plus!”

Available now on Steam Early Access for PC, Bartlow’s Dread Machine is priced at $14.99 USD and will be available in English, German, French, Italian, Spanish and Portuguese.