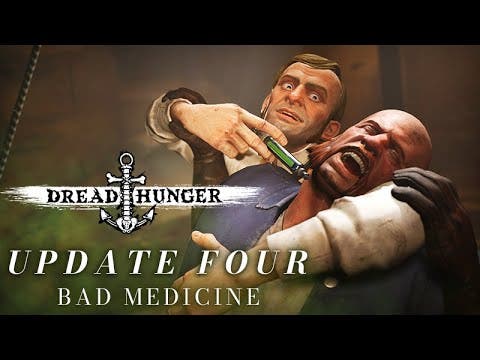 CHRISTCHURCH, NZ – Oct. 5, 2021 – Digital Confectioners, an independent PC and console games studio, announced today that Dread Hunger, its multiplayer game of survival and betrayal where players undertake a deadly voyage, will launch November 10 on Steam for PC. In preparation for the global rollout, the game received a new update that highlights a more social player experience.

Dread Hunger advances the social deception genre by immersing players in an 1850s Arctic exploration voyage where eight player-controlled Explorers depend on each other for survival—but two of them are Thralls determined to sabotage the mission!

The game mixes action-adventure gameplay in an icy Unreal® Engine world with roleplaying and social deception over voice chat. This unique combination continues to attract game content creators and players alike, with millions of video views and an 86% positive user review score during Early Access.

The new Dread Hunger “Bad Medicine” update strengthens social gameplay while deemphasizing player vs. player combat. It also adds the powerful new Armory team objective, a new model for the Doctor, and other content, as seen in today’s trailer:

“We’ve been listening closely to player feedback over the last few months, and one thing that kept coming up was a consensus that the game was a ‘PvP game with Social Deduction elements,’” said Alex Quick, Creative Director of the Dread Hunger Team.

“To many of our players, the most rewarding and unique aspect of Dread Hunger is the shock of an unexpected poisoning, or the subtle manipulation of a masterful liar that leads to distrust (and mutiny!) aboard the ship. With this update we are striving to bring those elements to the forefront, and make Dread Hunger more of a ‘Social Deduction game with PvP elements.’”

It’s up to each player in Dread Hunger to bring life to their chosen character through voice chat while completing objectives. The six Explorers must work together to gather resources to power the steam-powered sailing ship towards its destination while contending with the harsh climate.

Meanwhile, Thralls plot to poison food, massacre crewmembers, blow holes in the ship, and invoke dark magic to undermine the mission—all while pretending to be loyal Explorers. Starvation, wolves, cannibal attacks, and other gruesome fates abound, and any misplaced trust can quickly lead to a knife in the back. When food is sparse, fellow crewmates appear more and more appetizing.

Dread Hunger, scheduled to release for $29.99 / £23.79 / €24.99 on PC via Steam November 10, is developed by the Dread Hunger Team and published by Digital Confectioners. The developers are exploring options to bring the game to other platforms following its PC launch. To stay up to date with development progress, please visit Discord, Twitter, and Facebook.