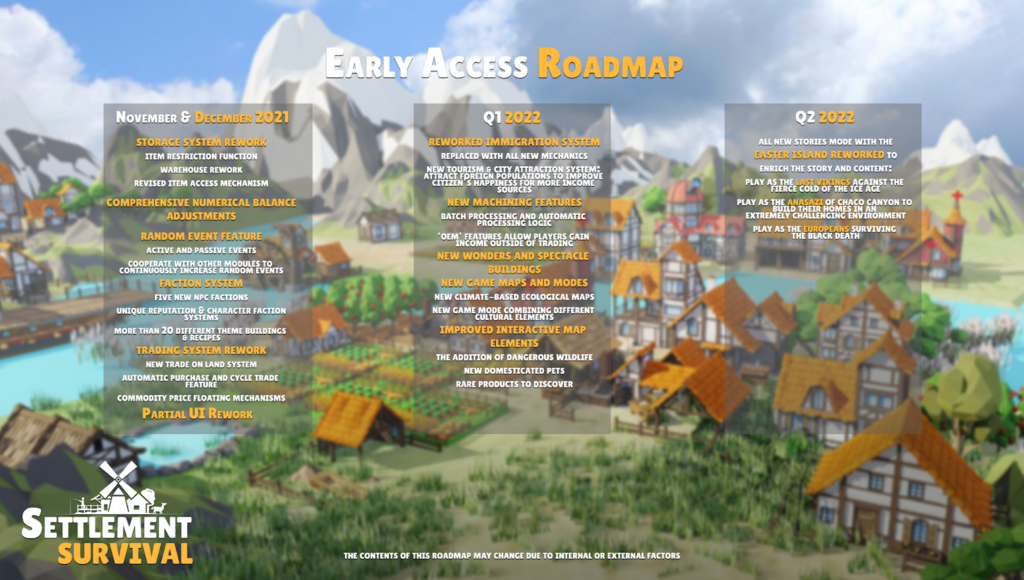 16 December 2021 – Settlement Survival, the smash-hit low-poly city builder from Gleamer Studios has officially built its roadmap. Selling almost 100,000 copies since it launched into Early Access in October, and having amassed more than 200,000 wishlists alongside thousands of Very Positive reviews on Steam, the roadmap is set to bring massive updates to the game.

From five new factions and dozens of new themed buildings, to ten new Wonders and Spectacles, the roadmap promises significant improvements in almost all areas. Whether that’s UI or balance adjustments, a new “Stories” mode that includes Vikings and Easter Island, or even fresh wildlife and ecological maps, the scope is huge.

Beginning in Q2 2022 and stretching into Q3 in preparation for the full release, the roadmap leans heavily into player feedback and builds on many of the requests fans have made. Having already released ten patches since October 11, including the near instant addition of Creative Workshop, a Halloween update and a Christmas only days away, Settlement Survival shows no signs of slowing down.

With gorgeous low-poly graphics, Settlement Survival invites players to lead a group of survivors in search of a new home, featuring seasonal weather cycles and natural disasters that directly impact your settlement. From torrential rain and heavy snowstorms to tornadoes and fires, you’ll need to heed the early warning signs to survive.

Combined with rare blueprints for unique builds, complex development routes for new buildings and abilities, and town Mayors who determine the character of your home, it’s down to you on how you manage the needs of your citizens, without upsetting the delicate balance of their lives.