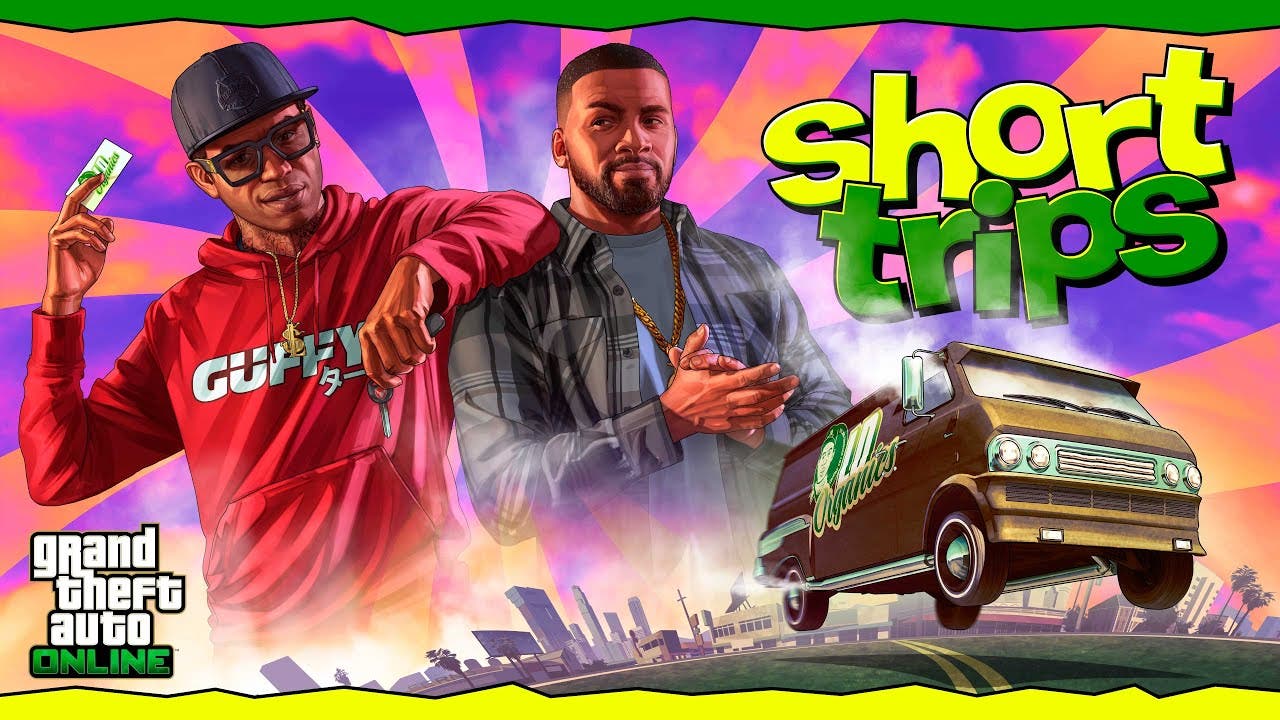 GTA Online offers Short Trips with Franklin and Lamar, picks up from where The Contract left off

It’s been quite some time since Franklin Clinton and his notorious accomplices knocked over the biggest targets in Southern San Andreas. Since then, Franklin’s put down roots in Los Santos — getting married, starting a family, and even wearing a suit to work. Meanwhile, Lamar just got high. But now it’s LD’s time to come up, and he’s laying the groundwork for a legit, above-board business of his own, if he can just pull it together…

It was supposed to be so simple: a couple storefronts in tourist-friendly neighborhoods, branded grinders, boutique strains, prescription-strength edibles, but Lamar’s run into all sorts of issues getting his operation off the ground. First off, legalization didn’t kill the illegal drug trade, but it did create an incentive for black-market dealers to undercut upstanding, tax-paying citizens like Mr. Davis. Then there are the celebrity investors and venture capitalists who heard about the latest cash-crop and circle overhead like vultures.

As Lamar sees it, Franklin still owes him a couple favors from back in the day. And Franklin’s down for pretty much anything, so long as Tanisha doesn’t find out he’s been smoking again.

Originally only available to play once you’ve completed the VIP Contract tracking down all of Dr. Dre’s missing tracks in The Contract, all GTA Online players can now see the world through the eyes of Franklin and Lamar in the two-player story-based co-op Short Trips — accessible via the Jobs Menu and paying out 2X GTA$ and RP through February 16.

And check out the video above, set to ‘Let’s Get It’ by NEZ and ScHoolboy Q — which can be heard on Radio Los Santos and will also be coming soon to music download and streaming services via CircoLoco Records.

Lamar’s quest to go legit starts with a warehouse and a truck full of his finest produce. He’s not expecting any trouble – which should tell you all you need to know. When the Vagos show up for their cut, it’s up to Franklin and Lamar to make sure that for once, crime doesn’t pay.

Lamar’s looking to get revenge on the Vagos and plans to burn down some of the gang’s illegal grow houses in the Sandy Shores area. Franklin and Lamar are hoping to reduce the gang’s crops to ashes, but if they’re not careful, they might smoke themselves out in the process.

Lamar finds his first big client in Jimmy Boston, actor and high-profile Epsilon devotee, whose plans for Lamar’s business are not the kind of corporate synergy Lamar is looking for. More proof that celebrities ruin everything – even weed.

Once you’ve enjoyed your short trips and are feeling more yourself, stick around the studio space. You never know, you might catch a recording session in progress or spot an artist dropping by to visit Dre. Or you might hear Lamar and Franklin playing the dozens and sharing stories about way back when.