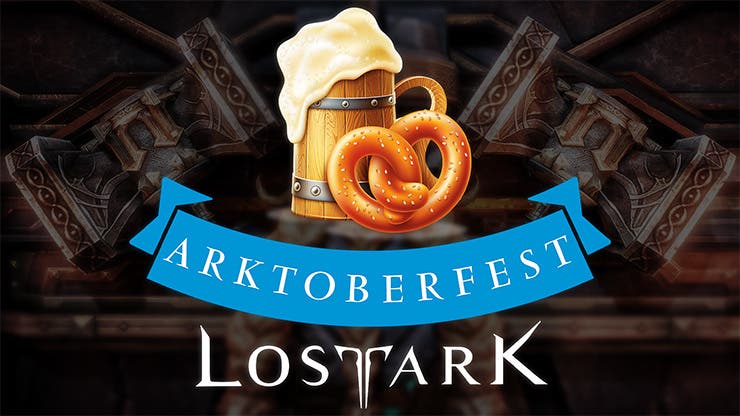 O’Zapft is Heroes of Arkesia! As the nights grow longer and the summer pool parties draw to an end, the fall season of festivals celebrating community and kinship begins. Beginning on September 16, Arkesia will host the first Arktoberfest— a tribute to Oktoberfest, the world’s largest Volksfest (people’s festival) which features a travelling funfair along with a food and beer festival held annually in Munich, Germany. Kindred in spirit to the original, Arktoberfest is a time to build relationships, celebrate with friends old and new alike, all through the medium of an abundance of delicious food and drink. In the coming weeks, you’ll find themed festival foods in-game and all-new cosmetics available as Twitch Drops to help you, your raiding parties, and your Lost Ark communities celebrate Arktoberfest together. Starting today and lasting until October 3, members of the Lost Ark Creator Program have access to the all-new Beer-head cosmetic Twitch Drop to enable on their channels! Make sure to head over to Twitch and watch your favorite Lost Ark content creators to earn your selection chest, where you can choose between Lager, Indian Pale Ale, or Stout.

Viewers will need to accumulate 4 hours of watch-time in participating Lost Ark streams to claim this Drop reward. Full instructions on account linking and claiming can be found on our Twitch Drops page.

Celebrate Arktoberfest with special festival food! During the weekends of Arktoberfest (based on server-time for 24hrs on Saturday and Sunday), the Fever-time button will be activated to claim unique food to help you and your raid parties in battle. These rewards can be claimed once per day each weekend— on the 17, 18, and 24, 25 of September and the 2, 3 of October. Make sure to claim the following items in-game:

If you’d like to fully embrace the spirit of Arktoberfest, there’s no place to better prepare than Gesbroy Island. An island home to a world-famous Umar establishment where hand-crafted beers are brewed to perfection, you can experience the best drink Arkesia has to offer. If you haven’t been there yet, make sure to complete the island’s main quests:

Completion rewards include Lager Doll Mask, Ale Doll Mask and Stout Doll Mask— toys that allow you to turn into a beer glass— perfect for celebrating Arktoberfest! If you want to continue working on quests that explore this legendary brewery, there are Una’s Tasks and Co-op Quests that take place on the island.

Gesbroy Island Soul is one of the final rewards of Una’s Task Reputation completion of Gesbroy. The three Una’s Tasks require participation in the co-op events listed below.

A set of 3 quests runs every hour.

If fails to complete the current quest progress in the given time, the next quest does not occur.

Completing all three quests rewards a title and the items needed to complete Una’s Task quests.

Enjoy the coming weeks of festival food and drink— we wish you a happy Arktoberfest!