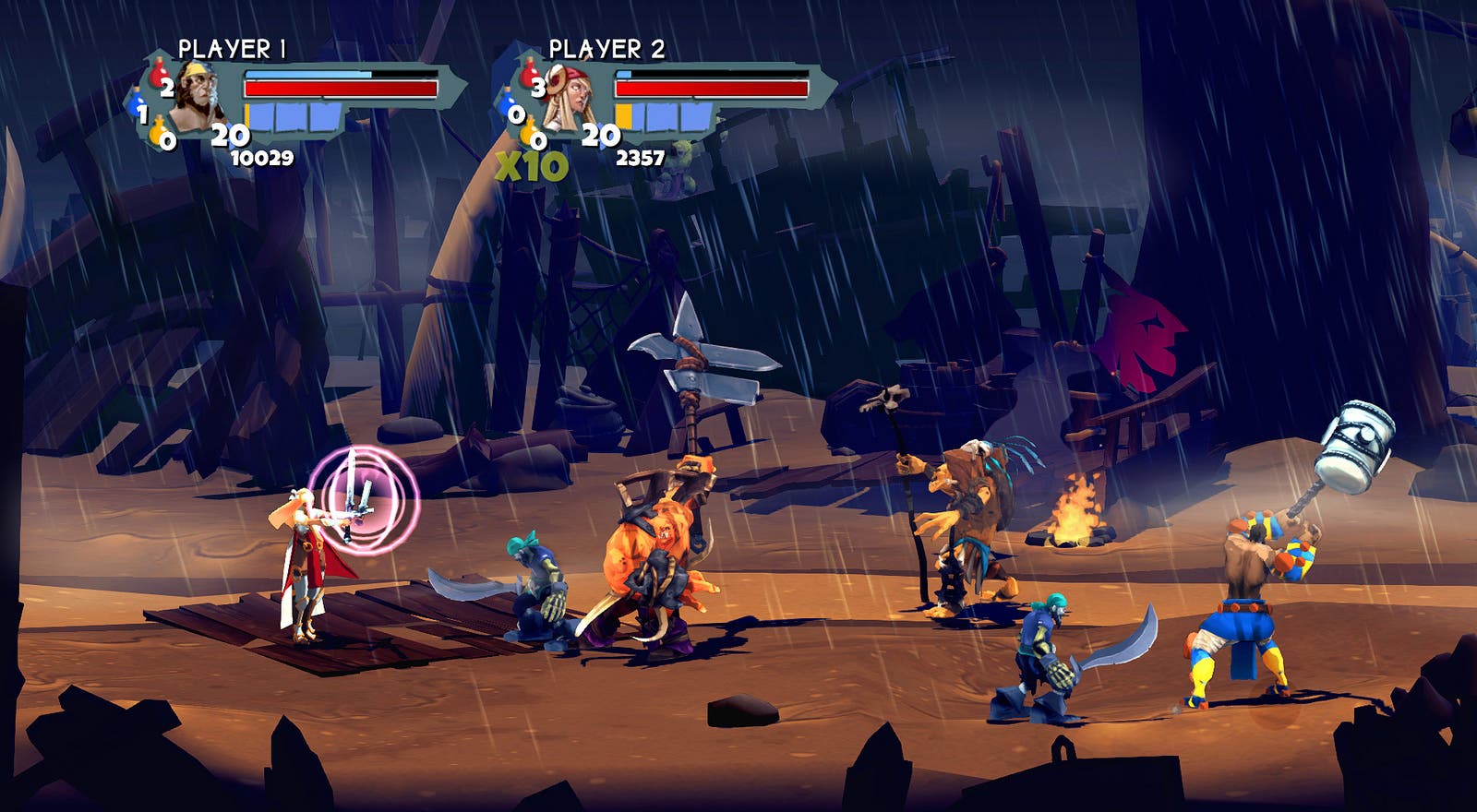 Coming into Sacred Citadel, I was unaware that it was actually a spin off of the popular Sacred series. Luckily for me, and those who love a good beat’em up, you don’t have to be familiar with the lore of Sacred Citadel to enjoy this game. It’s a fun RPG progression based beat’em up similar to another modern beat’em up, Castle Crashers. The game is gorgeous, it has a cartoony style with bright colors, and everyone has big exaggerated movements. The art stands out and looking at the different scenery is almost as enjoyable as the game is itself.

Sacred Citadel: The Fourth and Final Character is the Seraphim Mage

Three warriors stand against the evil Ashen Empire – one of them is the beautiful and determined Seraphim Mage.

The companions encounter a particularly fierce group of opponents. While the warriors in the front line of attack struggle to fend off the advancing mountain beasts, from the background of the battle the Seraphim launches one of her powerful attack spells. Caught off guard, the beasts immediately freeze to ice where they stand. Quickly, with the Safiri Warrior ahead of the others, the group of heroes leap on their hapless foes and smash them to the ground.

Deep Silver today revealed details about the fourth and final of the four character classes in the upcoming side-scrolling action brawler Sacred Citadel. The Seraphim represents the Mage class, specialized in offensive magic. She keeps to the background most of the time and casts devastating magic spells that cause elemental damage with various effects. With a spell book or a wand in her hand, she can also cause magic combo attacks using the elements of fire and ice.

The Seraphim were elite warriors, guardians of the gods. But after the Heart of Ancaria had been restored and peace had returned to the lands, the Seraphim went back to their remote cloisters, isolated from the rest of the world.

Sacred 3 is also already in development, and further details will be revealed at a later date.

Three warriors stand against the evil Ashen Empire – one of them is the resilient Ancarian Ranger:

While the action is moving back and forth on the battlefield, no side seems to get the upper hand. That lasts until a group of fierce flying beasts swoop down on our three heroes from the high cliffs. The Khukuri Shaman cannot evade this attack and gets hit by one of the spikes, flung by one the beasts. The fluttering wings of these insects creates a terrible noise on the battleground. The Ancarian Ranger silently draws his bow, takes aim and rapidly launches his shots against these winged enemies, taking them down quickly.

Three warriors stand against the evil Ashen Empire – one of them is the charming but iron-willed Khukuri Shaman.

Fierce Grimmoc warriors have almost brought the companions to their knees. The Safiri Warrior is overwhelmed by the sheer number of onrushing fighters, and his health is rapidly decreasing. In comes the Khukuri Shaman – quickly, she casts a spell to heal her party members. To counter the overpowering Grimmoc horde, she then rushes into battle to deal out crackling energy bolts with her magic wand.

The next awesome bit I’ve got for you today is a character featurette for one of our playable classes in the upcoming XBLA/PSN/PC title Sacred Citadel!  Sacred Citadel is a side-scrolling beat’em up developed by SouthEnd Interactive, the guys who did the unbelievably awesome ilomilo. :)   It’s coming out in 2013, and I CANT WAIT!

Today we’re showing you some gameplay footage of the Safiri character, who is, as we wrote in the trailer a skull-busting front row badass.  My favorite move of his is where he takes this giant fucking banhammer and just lays waste to all the things.  ALL THE THINGS! You can see for yourself in the vid and read more info about the Safiri in the attached press release. ;)

Deep Silver today revealed the first details about the upcoming Action RPG Sacred 3, the next installment in the popular series set in the rich and detailed world of Sacred.

They say that whoever possesses the Heart of Ancaria will decide the fate of the world. Zane Ashen, ruler of the corrupt Ashen Empire, will do everything in his power to obtain the Heart; however, the Seraphim have hidden it away in a secure and secret place. Only when a group of heroes combine their powers to oppose Zane Ashen’s reign of terror does the world have a chance of escaping utter destruction.

Up to four players can join the battle against the Ashen Empire in a unique and engaging co-op mode in which they will not only fight against the Imperial aggressors but also compete between each other in friendly rivalry. Are they as skilled as their friends in the use of their character’s talents? Can they surpass their companions’ accomplishments in battle?

Players can choose between several character classes – the Safiri Warrior and Ancarian Lancer being just two of these options. Each of these classes offers a specific skill set – players must choose their Combat Arts, perks and equipment wisely in order to stand a chance against the Ashen Empire.

The epic fight against Zane is set in a colorful and varied game world with rich mythology and diverse regions and climates. Many of the environments will be familiar from previous Sacred games, such as Castle Braverock, which now lies in ruins. Impressive bosses await the heroes along their journey – and fabled treasures, honor and experience are the reward for overcoming them!

Sacred 3 is an addictive action experience with accessible yet sophisticated gameplay.

The prelude to the story told in Sacred 3 can be experienced in the side scrolling action brawler Sacred Citadel, developed by Southend Interactive, that will also be available in 2013 for PlayStation®Network, Xbox LIVE® Arcade, Steam and through other digital partners.

Three warriors unite against an evil that threatens to enslave the once peaceful world of Ancaria. Lord Zane’s Ashen Empire has created an army of Grimmocs, modified Orc henchmen at war with the Seraphim. Only when these heroes unite and use their skills to support each other they will stand a chance!

Deep Silver today announced the side-scrolling action brawler Sacred Citadel, a new standalone title that is set in the rich universe of Sacred. Sacred Citadel will reinvent the familiar arcade feel of classic brawlers while setting a new standard for the future of side scrolling hack and slash games.