Three warriors stand against the evil Ashen Empire – one of them is the charming but iron-willed Khukuri Shaman.

Fierce Grimmoc warriors have almost brought the companions to their knees. The Safiri Warrior is overwhelmed by the sheer number of onrushing fighters, and his health is rapidly decreasing. In comes the Khukuri Shaman – quickly, she casts a spell to heal her party members. To counter the overpowering Grimmoc horde, she then rushes into battle to deal out crackling energy bolts with her magic wand.

Deep Silver today revealed details about the second of the four character classes from the upcoming side-scrolling action brawler Sacred™ Citadel. Unlike the Safiri Warrior, the Khukuri Shaman is not one to fight in the front line of a battle, but she has other, more bewitching ways of influencing her opponents. As a Shaman, she can cause buff effects on herself, the whole group, and even the enemy! She can heal her companions, strengthen the group’s attack skills, or even curse their enemies in order to blow them up. The Shaman represents the healer class in Sacred Citadel and adds an important tactical element to the co-op focus of the game.

Coming from the Aeshema Mountains, the race of the Khukuri has lived in seclusion for many centuries. Their home is a land of ice and wind, located in the northwest of Ancaria. But now the gods have ceased to communicate with the Khukuri, and their scouts speak of evil in the lowlands that will also endanger their remote homeland in the near future. Hence, the Khukuri head out into foreign lands to discover what has caused their gods to fall silent. 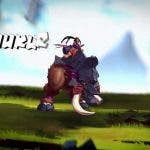