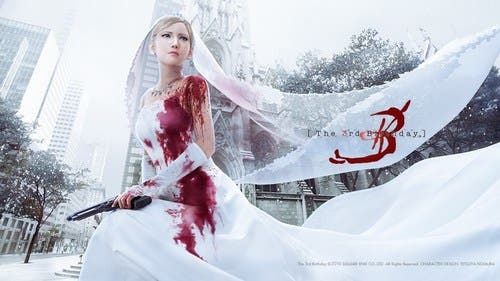 I’ve only ever heard of Parasite Eve.   I did know of its existence, but never bothered to play it or dig into the story.  So this game is my first taste of the Parasite Eve series.  Which by the way, I honestly did not know this game was a sequel until I read that somewhere online.

You play as Aya Brea, a member of CTI.  It’s an organization to stop the twisted invasion.  There is a lot of CGI cut scenes in this game and they are pretty decent in length.  They are all a good few minutes or so in length after each chapter.  The story was somewhat understandable but became way crazy and hard to follow at the end.  Quite literally I went, “what just happened?” at the end.

The enemy in the story is a race or some sort of organism called the Twisted which the game doesn’t do a good job describing till the very end.  All you know is that they are monsters and they are killing and taking people.  There are a few monster types and they are repeated throughout the game. You’ll run across infantry types, tank types, and agile scout types.  Then you’re introduced to a final boss that is a whole lot harder to kill. Let me say that I am not a fan of using the shoulder buttons on the psp.  You use them to fire your weapon and for something not automatic like the pistol, it sucks.  Constant clicking and cringing of my hand made for some uncomfortable play sessions.   Maybe it’s my smaller hands but it’s not comfortable.  I found myself stopping, putting the psp down, and doing something else for a little bit while my hands revived.

Aya moves rather slow but she does have a dodging ability which makes her quite agile for a quick second.  It’s basically a leap towards your desired direction but it’s quick enough to dodge incoming projectiles or swipes from monsters.  Aya also has the ability to enter another human’s body called Overdive.  She can do this as long as they are within a certain range.  This ties in directly to the story and how she is going back in time and possessing people to stop the twisted.  The game has her do these things to keep certain people from dying and hopefully eradicate the Twisted in the present time.  Again, the story is kind of out there.

Once a person is possessed you can choose from your hand picked arsenal that you chose before the mission and a weapon the person was already carrying.  Aim at an enemy long enough without shooting and a command called Crossfire will appear.  Here you can have all the soldiers in the given area attack that targeted enemy together. Pretty helpful when you know you need a breather to heal or find ammo. You take cover behind different barricades and walls to protect yourself but they will break over time and you will have to find a new spot to hide.

As I briefly mentioned earlier, you can bring your own weapons to the party.  As you play through the game you level Aya up, which unlocks new weapons.  Using these weapons will level them up and open up upgrades to make your guns stronger and faster.  Great feature and something I wish would open up a little faster.  I had a powerful machine gun that I would always use so it got upgrades the quickest.  But if I wanted to upgrade my weak pistol it would take forever to kill any enemies just to get it upgraded; made me not want to use the pistol ever.

You also unlock and find dna which can raise or lower Aya’s stats.  You use these dna bits on a 3×3 board and organize the strands so they fit in a way you like.  For example, find a strand that has a +3 pistol attack and +4 shield and place them down on the board.  Once the board is full you can either over write what is already there for something new or if the strand is the same, add to it.  Find a +3 pistol attack and +2 shield?  Put it over top the previous one to get a total +6 pistol and +6 shield.  Maybe I’m a sucker for leveling up a character and customization because I fully enjoyed making the perfect combo for my play style, which by the way is more offensive than defensive.

You can play through on normal and then do a second play though with new game + at a harder difficulty.  In new game+ you will keep your current weapons, level, and stats which do make for slightly easier attempts at those harder difficulties.  Normal was hard enough for me though with some of these more difficult to defeat bosses, even with my upgraded weapons and skill.  I couldn’t imagine the nightmare it would be on hard or one of the harder difficulties you unlock.  Nope, don’t want to picture it.  You can also unlock cheats and new outfits for beating the game.  Oh and did I mention that your outfits get damaged over time and her clothing gets ripped apart?  Oh yeah, ps2 quality digital bras and panties.  Amazing how they always seem to be intact.

All in all, I did enjoy the game, even if the ended was in my top 10 WTF moments of gaming.  Oh and that the controls blow on a PSP.