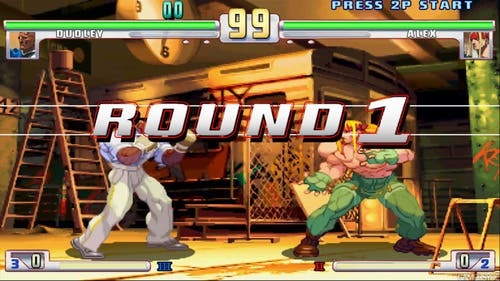 With only two returning characters from the previous game (Ken and Ryu), and a wildly different aesthetic, Street Fighter III was met with a lukewarm reaction by most. Eventually Capcom brought back Chun-Li and Akuma in future iterations but the cast of the game was still dominated with quirky characters including 4 non-humans, and 3 characters dressed in their bathing suits. It didn’t help that Street Fighter III was also competing with the likes of Street Fighter Alpha 2 & 3 and Marvel vs. Capcom as well as a slew of 3D fighting games.

Street Fighter III: 3rd Strike was also one of the most technical fighting games ever released. Incorporating a timing sensitive parry system, EX moves, multiple Supers per character, and combos that required lightning fast fingers to execute, this game was not for the faint of heart. The ceiling was extremely high for skilled players, which did cause 3rd Strike to be proclaimed the best fighting game ever made in the circles of Tournament players.

And it wasn’t until this past week that one of the best fighting games ever made was given a long awaited and lovingly crafted re-release with the release of Street Fighter III: 3rd Strike Online Edition. It’s still the same game, so if you loved it a decade ago, you’ll love it now. But if you didn’t, the passage of time may give you another perspective when revisiting this game.

With Street Fighter IV taking the mantle the series and reintroducing all of the favourite characters which were omitted from this game, it actually allowed me to go back and appreciate the cast here rather than hate on all of the omissions from Street Fighter II. Random Select, a curious exclusion from the Arcade version of 3rd Strike, is perhaps one of the best things that has happened to this game. Whenever I played previous incarnations of 3rd Strike, I’d always stick to what I knew in Ken, Ryu and Chun-Li due to the unfamiliarity of the rest of the cast. But now with Random select I’ve actually discovered that there are other characters in this game that I like to play with and that I may even be better with.

3rd Strike Online Edition also includes a bunch of new content. During gameplay, you’ll be given challenges on the sides of the screen which will give you a chance to play the game differently and perhaps discover new tactics to use in the future. 3rd Strike also includes a training mode which is pretty standard fare for fighting games these days.

Trials mode gives you various scenarios where the game will ask you to perform a specific parry or combo. The game isn’t very instructional in this mode though. It will let you know if you performed the parry or combo correctly or incorrectly, but if you’re getting it wrong you will have absolutely no clue as to what you are doing wrong. So if you aren’t extremely motivated to get better at the game, this mode won’t help you very much. However, if you’re willing to go search out help on the internet on how to pull off some of these combos, this could be a useful learning tool. One thing that I learned while going through the trials is that the window to perform some of the actions in the simplest of combos is extremely tight, more so than any other fighting game I’ve ever played. I literally had trouble linking some of the simple two or three move combos due to the timing being so sensitive after trying them for a good 15 minutes or so; in contrast, with Mortal Kombat 9, it wasn’t too hard for me to learn 30-40% combos after trying them for a few minutes. The lack of an indicator of what I was doing wrong in 3rd Strike didn’t help either.

There is also an area in the game, akin to the Krypt in Mortal Kombat, where you can unlock concept art and a different soundtrack for the game via points you earn by completing Challenges and Trials called The Vault. By default, the Intro and Select screen songs are actually the remixed versions which I feel work much better as the Classic versions of these songs (unlockable through the Vault) sound very 90’s at this point. The Remixes for all of the Stage music in the game are locked in the vault by default. While I don’t think all of Simon Viklund’s Remixes are better the original versions (the New York stage being a prominent example), he absolutely hit a few of them out of the park. Brazil’s remix music, The Longshoreman, is absolutely one of my favourite music tracks in gaming this year.

Unlike Super Street Fighter II Turbo HD Remix, Capcom did not opt to redraw the Characters or Backgrounds in HD. This decision is understandable as Street Fighter III due to the amount of animations that would have to be recreated. Instead, they use an upscaling filter to bring the visuals up to HD standards. This filter can be turned off for purists so don’t fret if you’re one of those who absolutely hates these kinds of filters. It is a little disappointing that they decided not to redraw the backgrounds in HD though.

There is also a lack of a true widescreen mode in this game which is also disappointing. In Super Street Fighter II Turbo HD Remix they cropped the top and bottom of the screen to make the game widescreen without affecting the gameplay; in Marvel vs. Capcom 2 they expanded with width of the visual area but locked the Characters into the original 4:3 space. Instead, Capcom opted for a simple stretch option with this game. I can understand why purists may not want the other two options, but for those who wanted a true widescreen mode, why not give them the option? A combination of a slight crop of the top and bottom of the screen, a slight expansion of the width of the screen and a very slight stretch would have given a lot more pleasing results in my opinion. Due to the lack of a true widescreen mode however, I’ve adjusted the screen to an aspect ratio that’s somewhere between 4:3 and 16:9 which fills out most of the screen but also doesn’t stretch the visuals too much. To Capcom’s credit, at least they gave the ability to adjust the screen dimensions manually.

Since the game came out I have only been able to get into one Ranked or Player match on Xbox Live, and this was after waiting for a couple of minutes during the matchmaking. This is especially bad considering the game is titled “Online Edition”. I really don’t like the trend of games coming out and their online modes being crippled or completely non-functional for the first few weeks.

That being said, one of the online features that does work great is the Tournament mode. Hit Quick Tournament to join a tournament of up to 8 people in Single Elimination matches, Best 2 out of 3 matches, or a Marathon mode which has you playing Best 4 out of 7 matches with each match being a best 4 out of 7 rounds match. I’ve entered a handful of these tournaments and they’ve been absolutely thrilling for me. I was pumping my fist after notching my first victory in this mode. It’s like having your own little slice of Evo.

The netcode itself is fantastic. One of the headline features for this game is the inclusion of GGPO, networking code for fighting games built by one of the founders of Evo. This allows you to perform combos online with the exact same timing as offline and also gives a fair match to both players.