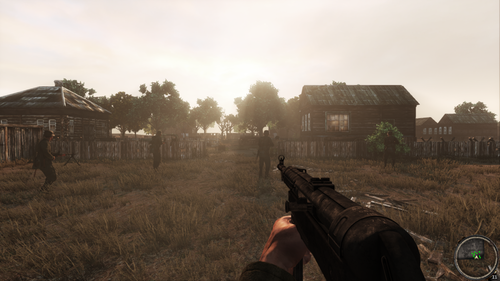 The “Make Something Unreal” contest by Epic Games (the creators of the Unreal engine) is no stranger to long-time winners Tripwire Interactive. They are popular developer for their mods turned to retail games include: Killing Floor and The Ball. Now they have a follow-up to Red Orchestra – Heroes of Stalingrad. The game utilizes the latest version of Unreal Engine 3 – one of the most satisfying games set in World War II.

This game is no joke, as you will find it brutally realistic and it demands teamwork in order to achieve success. The HUD is minimal displaying as little information as possible. The traditional crosshairs are not present, in any capacity. If you shoot from the hip, you have no idea where the bullets will spray. If you pull-up the iron sights, you will use them to close in on your target. For added accuracy, you can hold your breath by holding Shift. When it’s time to reload you don’t know how much ammo you have, so you’ll have to count yourself, or hold R to count the bullets that are left. The game does provide some text to tell you if the mag is half or all the way full. Throwing grenades is probably the most trickiest – as you have your left hand be the guiding hand (crosshairs) for where the grenade will be thrown. You will learn quickly if you get right or not.

Red Orchestra 2’s main focus, is multiplayer. Though there is single-player, it takes place on the multiplayer maps and they tutorialize all the elements that make-up the online experience. That isn’t to say the singleplayer is something to be ignored, you will learn many mechanics of the game as they act like multiplayer matches in almost every way. What you won’t learn, is how to deal with the tactics of a real player as the bots aren’t very smart, but you’ll get something out of playing “offline” in singleplayer before jumping in against real human opponents.

Multiplayer matches range from Campaign (Co-Op), Firefight (Team Deathmatch), Countdown (Single Life TDM) and Territory (Capture and Hold). Now, hopefully you’ll get lucky in finding a server to join, as the Server Browser can get finicky and not display the servers after recently disconnecting from a game. All the maps have a distinct look to them and not each one is the same. All of which are gorgeous, though probably to no fault of Tripwire, the game suffers the Unreal Engine 3 “texture load-in”, but it’s generally pretty quick. I really found the guns, the handling, the movement all to be satisfying. Though I must say, the most rewarding aspect is getting a kill. Now, the kills themselves do not warrant many points as it’s not the overarching objective. Landing a satisfying chest or headshot will down your enemy for good. If you happen to graze them or hit them in the leg, they have the possibility of escape and bandaging themselves up to continue.

There are several modes of how you fight: Tank, Combined Arms (Vehicles & People), and Infantry. The Tank-only battles can be quite exhilarating. You can climb into a tank with a crew and each person can take a role in the tank or you can solo a tank for yourself. Each mode, each type of game has a Spawn Queue, but it isn’t very long and unless it’s Countdown – you’ll be back in the action quickly. Each team is limited to the Classes that are taken. Snipers are limited to 2 per team, and there’s limited spots for Rifleman and Machine Gunners. Another pillar for success is belonging to a Squad. Communication is tighter within a squad as you can receive specific instructions from your Commander.

Taking cover is of utmost importance, you can get by without it – but it’s best if you learn how to do it. The animations from other players and yourself are really well done – especially when you’re blown up. Every grenade blast or artillery strike you experience propels your body from the location and lands you on your back. You’re then looking up at the sky with dirt and blood in your eyes, deafened by the sound as you fade to black and die. Respawns are possible here (so not too simulation to the point of frustration). Prepare to die, a lot.

There’s no other game that captures the gritty action, tactical pacing, or the era that Red Orchestra 2 takes place in, other than Red Orchestra itself. It’s highly enjoyable with a steep learning curve, but those willing to take the time to be slow and methodical will find a lot of enjoyment of working together to feel like a true Hero of Stalingrad. This game improves on prior game elements and sets a new standard for computer multiplayer games.