Majesco Entertainment Company, an innovative provider of video games for the mass market, announced today the first full-body motion wrestling game,  Hulk Hogan’s Main Event, is available now only on Kinect for Xbox 360! Transform your living room into a wrestling ring and train with Hulk Hogan as he schools you on the best jaw-dropping moves and stunts to win over the crowd and defeat your opponent in spectacular style.

“Hulkamaniacs everywhere should get off the couch and rule the ring with Hulk Hogan’s Main Event, where I’m going to teach you all to perform for the crowd and compete in the ring as wrestling superstars,” said Hulk Hogan.

Wrestling icon, TNA’s IMPACT WRESTLING Superstar, and global sensation Hulk Hogan serves as your mentor and trainer helping build your wrestling personality while teaching you the art of showmanship.  Entertain cheering fans with punishing combos and brutal stunts like the chair hit that will knock your opponent out of the ring. The crazier and wilder your motions, the more high-impact your wrestling performance will be!

“We are bringing the world of pro-wrestling to life with this dynamic and fun, full-body wrestling game,” said Jesse Sutton, CEO, Majesco Entertainment. “We can’t wait for Hulk fanatics to get their hands on this game and be schooled by arguably the most well-known wrestler in the world–the Hulkster!” 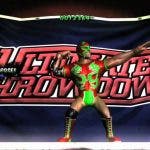 o    Campaign: Work your way from backyard matches to the big stage while keeping the crowd on their feet.

o   Quick Stunt: Practice any extreme stunt before primetime in the ring.

o   Replay Highlights: Relive your best stunts in slow motion to revel in your glory days.

Developed by Panic Button LLC and rated T for Teen, Hulk Hogan’s Main Event only on Kinect for Xbox 360 is now available for the suggested retail price of $49.99.