With less than a month until the highly anticipated release of “Halo: Combat Evolved Anniversary” on Nov. 15, Microsoft’s “Halo” studio, 343 Industries unleashed a volley of exciting news at New York Comic-Con this weekend, including the return of the fan-favorite multiplayer map Hang ‘Em High in “Halo: Combat Evolved Anniversary,” details about the game’s innovative Kinect integration, and the next evolution of Halo Waypoint, the ultimate online destination for “Halo” fans.

Announced at New York Comic-Con, High Noon, the stunning remake of the classic “Halo: Combat Evolved” map Hang ‘Em High, is set to make its glorious return in “Halo: Anniversary.” High Noon (also known as Hang ‘Em High in classic mode) combines a decade of poignant nostalgia with the adrenaline-pumping thrill of classic “Halo” multiplayer combat, to round out the cavalcade of seven fan-favorite multiplayer maps launching with “Halo: Anniversary.”

HIGH NOON – High Noon returns players to the familiar canyons and catwalks of Hang ‘Em High, the “Halo: Combat Evolved” classic multiplayer map, now reimagined for “Halo: Anniversary” with unprecedented detail. The vast generator complexes, which power this enormous slipspace portal, allow it to connect with an unknown number of locations across the galaxy. High Noon is a densely-packed arena of platforms, corridors and cover, best suited for team-based combat in both Slayer and Objective gametypes (4 – 12 players). 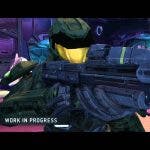 Alongside the reveal of High Noon, 343 Industries also unveiled details about Kinect functionality in “Halo: Anniversary,” including voice commands and a new feature that lets players gather canonical  information about its universe as they explore “Halo” and relive the iconic adventure:

Analyze Mode – Analyze Mode is a Kinect-exclusive feature that allows players to “scan” items of interest within the “Halo: Anniversary” campaign to populate the Library, an interactive encyclopedia of “Halo” lore.  Once in Analyze mode, new articles of interest can be added to the Library by focusing the reticule on them and saying “Scan.”

The Library – The Library is an expansive index that provides detailed information on items of interest players have scanned through “Analyze Mode,” such as vehicles, characters, enemies and weapons. Through the use of gesture controls, players can explore the entire Library at any time and then return to the campaign to continue unlocking more secrets within the “Halo” universe.

Voice Commands – Harness the technology of Kinect for Xbox 360 to reload your weapon, throw grenades, switch seamlessly between Classic and Remastered graphics and more, using only your voice.

Halo Waypoint has been the ultimate destination for “Halo” fans on Xbox LIVE since 2009, and this weekend, 343 Industries offered a sneak peak at what’s in store for the groundbreaking online service this holiday:

New Halo Waypoint Interface – A revamped design and user interface lets players navigate Halo Waypoint and access the content they want more easily than ever before, whether they’re online, on their Xbox 360 or on their Windows Phone.

Custom Challenges – Building upon the “Halo” series’ genre-defining user-creation toolset, 343 Industries is empowering the community even further by introducing Custom Challenges in “Halo: Anniversary” and “Halo: Reach.” For the first time, players will be able to issue custom Challenges and create friendly competitions with Xbox friends, unlocking infinite creative possibilities to invent and test their “Halo” skills against one another.

For example, players can create a Challenge to get a specific number of headshots (say 50) in Multiplayer, within 24 hours.  They can then try the challenge themselves, or invite their friends to give it a shot to see who can get the most headshots.  Challenges can be created for Campaign, Matchmaking Firefight, Multiplayer and even Custom modes.

For a sneak peek at Halo Waypoint ATLAS and Kinect functionality in “Halo: Anniversary,” new footage of the iconic level, “The Pillar of Autumn,” and screenshots of High Noon, be sure to check out the new behind-the-scenes videos and screenshot galleries from 343 Industries available today on Halo Waypoint and HaloWaypoint.com.

For more information about “Halo: Anniversary” and the “Halo” franchise, please visit HaloWaypoint.com and follow the 343 team on Facebook at http://www.facebook.com/HaloWaypoint.

With a bounty of new features including cooperative play over Xbox LIVE, a bundle of some of the most beloved multiplayer maps in “Halo” history reimagined, new challenges and new story to uncover, “Halo: Combat Evolved Anniversary” is a must-have experience, coming exclusively to Xbox 360 on Nov. 15, 2011.